Encouraging Women to Step up as Enlightened Leaders. 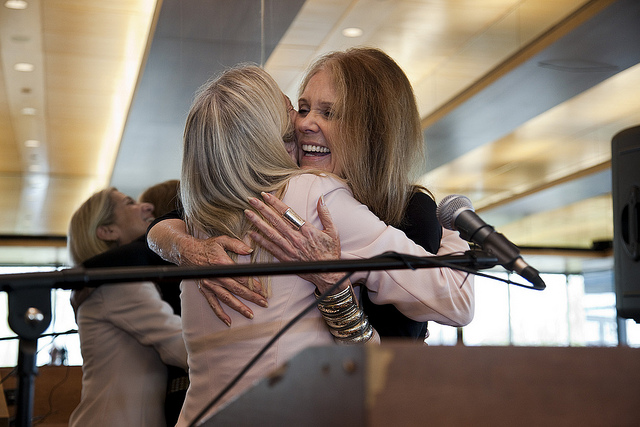 Are women our best hope for enlightened leadership?

Having seen what happened in the UK during the “Thatcher years”—as well as in governments elsewhere in the world—my answer to this has been a fairly solid “no” up until recently.

But then I began to explore below the surface a little more, prompted by seeing a world that is attempting to shake free of old models of authority and power-dysfunctional governments, economies and organizations that are struggling, falling apart or stressing their people with their systems.

Instead of focussing entirely on what we’re unhappy with, however, it seems relevant to broaden our view and to explore other models of leadership. This brought me back to looking at alternative ways in which power is regarded across cultures, age groups and genders. And in a seemingly coincidental manner, a series of articles relating to women and power have been crossing my virtual desk, ranging from stories of female entrepreneurs to blogs on rebellious teenage girls and books on ancient female gurus, all of which have been looking at female power from different angles.

So then I wondered: are women our best hope for a new model of enlightened leadership?

In sharp contrast to some indigenous societies, modern life is structured around yang, or masculine, attributes. Regardless of whether women have been making in-roads into business, politics and economics, the values that currently attract the greatest public recognition by both sexes are masculine ones. We are driven by achievements and goals, guided primarily by logic and analysis, structured by schedules and deadlines. And our leaders, whether of nations or corporations, as well as the leadership models that those of us in business groom ourselves for, reflect these qualities.

Not only do masculine values predominate, but they also tend to be the lower end of the the yang spectrum that we still see reflected in leadership, although it is starting to change. Power is still too often modeled as “power over” another, goals and rewards are still primarily financial and structures and schedules are based on models that are not innately natural to human beings as a species.

Generations ago, when the feminist movement first gained popular support among generations of women, there were many who felt that if women were in power, things would be different. I think by now, though, we’ve seen plenty of evidence that this isn’t necessarily the case.

Women have proven themselves as just capable as men of expressing the full range of masculine attributes, from the most enlightened decisiveness to the lower end of the spectrum where power is used to bully and intimidate. Granted, there is still a long way to go globally before women are as fully part of every level of the workplace as men are and we may see a natural shift happen as they make their way more fully through every area of life.

But I confess to a certain nervousness that we are missing an opportunity for deeper change as I watch younger women enter business life, adopting the existing modes of operation and behavior and emphasizing their masculine aspects while suppressing their feminine ones—as if the feminine has no place in the corporate world.

But perhaps herein lies the path to solutions for some of the challenges facing current leaders, including but not limited to how to deal with conflict and navigate financial crises. Perhaps by relaxing our intense reliance on the masculine model we may find that our current paradigms of government and business start to shift, allowing new models to emerge which are naturally more in tune with what we value at a deeper level (e.g. freedom, respect, fulfillment).

And by masculine I don’t just mean pertaining to men, as both sexes carry masculine and feminine aspects. The issue here is not a male vs. female one—it is the dominance of one set of characteristics over another, masculine dominating feminine.

After all, why does leadership always have to be about doing? Even in nature—the most efficient of long-lasting systems—there is a recognition of the natural need for both expansion and contraction, for active periods to be balanced with periods of decline and regeneration. This is also accepted in strategic economic and financial models.

So why do we continue to assume we can always operate from the active, yang, masculine principles in life and leadership without equal attention to the yin, feminine principles?

Our over-emphasis on the masculine has led to a situation where we immediately feel like something is wrong when we aren’t actively doing or achieving, when things slow down and what has been our default position to life doesn’t seem to be working anymore. We pull up our socks and try even harder to break through, to stay on target, to find new forms of activity that might work to achieve our goals.

If ever there was a time for male leaders to support potential female leaders in stepping forward, this is it. And if there was ever an invitation needed for women currently in senior roles to move away from traditional models of leadership in order to find new ones, then the ongoing crises in international economic, political and social spheres should be all that is needed.

Creating a space for women isn’t enough in its own right, though. There needs to be encouragement and support for female managers to spend time exploring and expressing new/renewed ways of leading. This is also true for men, but I emphasize women here because of their more natural affinity to the yin aspects of life and the fact that they are still relative newcomers, in the historical sense, to these spheres.

But some of the encouragement that is needed has to come from within.

Women need to be comfortable in allowing themselves to constructively question established structures of authority and to carry power in a way that most authentically reflects who they are underneath any masks they wear in public.

Most successful business women have learned to express themselves in ways that keep the feminine at bay and it can take a significant degree of courage, confidence and autonomy—not to mention “time out“— to change behaviors that have won them kudos in their careers to date.

One of the underlying issues, though, is a narrow view of what power is and the tendency to assume that:

The inherent power of the feminine energy isn’t what we normally associate with the word “power” from our predominantly yang perspective:

The question remains: Are we ready or desperate enough yet as a society to be open to power and leadership that integrates yin with yang, feminine with masculine? It is much deeper than reaching quotas in the employment and promotion of women. It requires a fundamental re-evaluation of how we operate in business and the courage to be open to new perspectives. And those women who currently hold the reins of leadership, as MDs, CEOs, COOs and Managers have the opportunity to be the pioneers.