There has been a lot of outrage lately about yoga and consumerism.

People are pissed that yoga pants can cost close to (or above) $100, and it seems like yoga clothing and accessory companies are taking advantage of our desires to express our yogic identities.

In short, it feels to many of us yogis that yoga—a beautiful spiritual practice—is being commercialized.

For the most part, this is true.

But I would argue that there is good reason to buy $100 yoga pants if you want to really, truly practice yoga.

Bear with me for a second. I don’t mean just any yoga pants—I’m not arguing that $90 Lululemon capris help you be a better yogi.

I am, however, arguing that $100 American-made yoga clothes do.

Because of a not-so-little thing called sweatshops.

Look at the tags of your Athleta, Lululemon, Nike, Old Navy or Target yoga pants. They are almost definitely made in Asia, and you can be sure that they are made in sweatshops, where people work 100-plus hours a week (in shifts that last anywhere from 14 to 22 hours) for wages that are well below poverty level (around 20 to 24 cents per hour).

On top of that, laborers are regularly cheated out of their overtime wages.

According to the Institute for Global Labour and Human Rights, this isn’t even the worst of it. Workers aren’t just abused financially but also physically—beatings in sweatshops are commonplace.

And the employees in these sweatshops aren’t just adults.

They are often children as young as 10 years old. A British newspaper, The Observer, interviewed children working in clothing factories in India who worked 16 hours per day for no pay, children whose parents sold them to the factories, children who were beaten with pipes or who had oiled cloths shoved in their mouths if they cried.

Children who worked in factories with hallways flooded with excrement.

The BBC found these same working conditions in clothing factories in Cambodia.

And while Gap, the parent company of Old Navy, says they now have in-house auditors to monitor these abuses, they have not released any of the auditors’ reports, a failure to act that speaks for itself.

Here’s how the yamas relate to yoga pants:

This yama clearly requires that you not buy clothes that are made in sweatshops and that you should not support companies that engage in violent practices.

After all, how can you wear $14 yoga pants made by a child slave and preach compassion and nonviolence at the same time?

If one is to be truthful, then one has to acknowledge and accept that their clothing is not just a financial bargain, but an ethical bargain as well.

Stealing doesn’t only refer to taking something from another’s pocket.

It means obtaining anything in a way that isn’t honest.

Purchasing something made by someone who is paid only a few cents an hour, who still can’t make a living wage when working hundred-hour weeks, is far from honest.

It’s easy to say that spending around $100 on a pair of yoga pants is excessive, that it’s unnecessary when there are so many cheaper clothing lines around.

But that argument requires you to assume that basic human rights aren’t valuable and that having ethically-made belongings is excessive.

In the Bhagavad Gita, Krishna says,

“Let your concern be with action alone, and never with the fruits of action.”

The implications here are clear—to avoid greed, one must be more concerned with how their possessions have come to be than with the possessions themselves.

This doesn’t mean that I think you should only buy $100 yoga pants (or the designer $450 pairs that are now being released).

But it means I think that if you really want to practice yoga, you should be aware of where and how your clothes are being made.

That instead of looking for the best financial bargain, perhaps you should be willing to spend a bit more to support humane, compassionate companies that need to charge you more so that the people who make your clothes can have the quality of life they deserve.

So You’ve Broken Up With Lululemon—Now What? 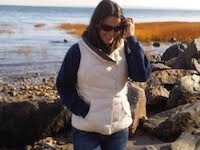