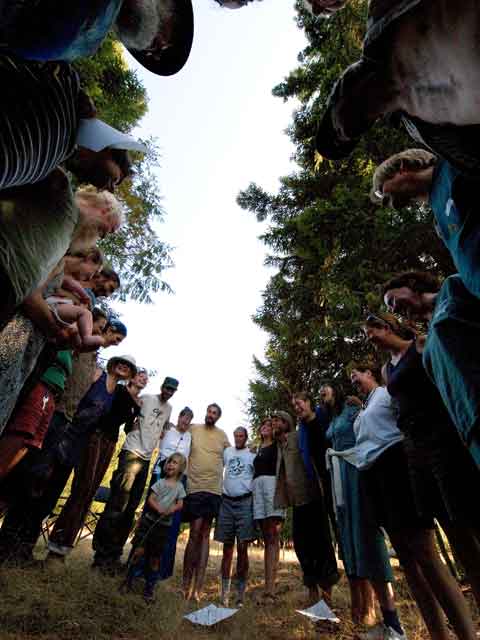 This episode is a snapshot of the harmful impacts of globalization and the need to reintegrate and re-power our communities to ensure the happiness and wellbeing of our society.

At first glance, globalization appears as a primarily positive influence for the socio-economic evolution of our global culture because there has been some short-terms gains; however the long-term reality is much more destructive. The deregulation of international trade and the consolidation of power structures has caused severe damage to local economies, cultural diversity, food quality, business ethics, Mother Earth and individual health, among other areas.

Helena Norberg-Hodge starred in and was the producer and co-director of the award winning documentary The Economics of Happiness. She is the founder and director of Local Futures (formerly the International Society for Ecology and Culture).

She works tirelessly to awaken society to the adverse impacts that arise from global power and economic structures through engaging in lectures, film screenings, workshops and international conferences, as well as writing for various publications.

Globalization is the emergence of bodies that organize, operate and economize on an international scale. It arguably originated to a small degree millennia ago, however since the 19th Century, and particularly over the past few decades, it has come to dominate the way in which the world owns, distributes, obtains, consumes and wastes its resources.

A direct result of an internationalized market is the interdependence of the political and economic spheres between most individual nations. A catastrophic example of this in the finance sector is the 2008 global financial crisis in which the collapse of one organization reverberated throughout the world, causing widespread suffering for so many societies and their people.

Massive Multinational companies are the face of globalization, as well as the face of deeply embedded power configurations that have monopolized and therefore controlled the short-to-mid term evolution of global affairs. Their agenda has been delivered specifically through the purchase of political agents and more generally through the monolithic corporations which they either own or control, whose activities are hardly regulated or influenced by individual nations.

Examples of the expansion of this corporate tyranny are the development of secret trade agreements, such as the TPP, TTIP and TiSA, all of which will transfer more power to the elite who control these organisations. If the people of the earth do not unite to squash these treaties, further erosion of our health, vitality and community spirit will no doubt result.

In addition, globalization has unfortunately guaranteed that high amounts of wealth and resources have been redistributed from the people to the elite. Local communities have also been stripped of their foundations and there has been extensive destruction of our natural systems, including the biodiversity of life on earth.

To summarize, problems which are now infamously recognized to be directly linked to globalization include:

Helena directly witnessed the destructive impacts of globalization on a small region called Ladakh in South Asia. Ladakh was protected by the Indian Government from external influences for several decades until it was opened to the global economy in the 1970’s. Within a decade, the healthy and self-sustaining community descended into despair with high levels of unemployment, family breakdown, urban slums and pollution.

This is a personified example of the impacts of globalized trade and an interdependent economy. When commodities that are manufactured on the other side of the globe sell for much less than locally-produced goods, it destroys local trade, produces unemployment, creates unhappiness and breaks apart communities.

Plus, when a community is bombarded with materialistic and consumerist obsessions it destabilizes the collective investment in real states of intangible worth, such as ethics, sharing, love and support, as well as produces an amnesia for the significance of healthy food creation.

Therefore, the interview covers what she learned from that early experience as well as the necessity to re-regulate the globalized economy and internationalized corporations. Helena also talks about the importance of reconnecting to nature, what happiness is really based on and the need to undertake an important shift in how we value each other and our environment.

Helena is a gentle but powerful energy in the quest to re-regulate the globalized corporate structures to mitigate the severity of suffering they cause for humanity. In this video she inspiringly critiques where we’ve come from, where we are and where we should be going as an “awakening” society.

There is no doubt that we need to rethink how we’ve designed the way we access our resources on local, national and international scales. She encourages the local production of food and other resources, as well as the re-integration of individuals into their local communities to find a health and happiness rarely found in an increasingly competitive, discontent and disconnected world.

The interview goes for a little over an hour, but it is well worth it. She sums up the spirit of this project perfectly and it is therefore a necessary introduction for those who really want to understand the way that our current systems are impacting our health and happiness.