Still Shaking but Slowly Recovering, Nepal as of June 1st, 2015. 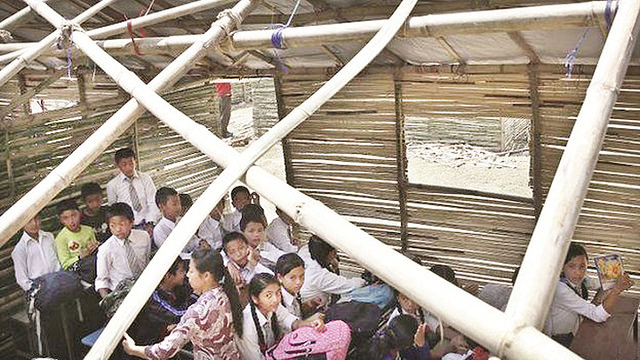 Six weeks after the first earthquake struck Nepal, some of the crucial pieces of infrastructure are being picked up.

Although most school buildings throughout the country were deemed damaged or unsafe, the Education Ministry ordered that classes be held in temporary classrooms starting Sunday, May 31. This means a precious return to semi-normalcy for so many children who have lost a month of schooling already.

Also the government has now banned child travel out of Nepal without legal guardians in order to protect homeless children from Indian traffickers, who turn boys and girls into child laborers or make them work in brothels. Homeless children have been particularly vulnerable if living in one of the many tent camps.

The burning of bodies of victims has slowed to a more normal rate of cremations.

Still, survivors are camped out in tent cities throughout the Kathmandu Valley, and many have been experiencing what is being called “earthquake hangover”—a feeling that the ground is still shaking when it is not. But real tremors do continue, although down to three or four a day—and the aftershocks are still triggering landslides, which cut off needed aid to villages that have been reduced to rubble.

Just last week a widow, without any surviving family, had been found living on bark, leaf, and the roots of trees to survive before aid finally reached her and saved her from starvation. Food and blankets are still needed in these remote areas, along with plastic, which together with bamboo and tin make temporary shelters.

In Northwest Nepal a new lake has formed from the heavy rain and mudslides, forcing villages there to be abandoned. Their terraced rice fields and farmland have been washed away and their animals are sick or dead. In other villages, rice seed and livestock are needed.

Because 2.5 million Nepalese are homeless, many have come down from the villages to Kathmandu, where 70% of the people in the city are still sleeping outside. With the monsoons now starting, the torrential rains will bring new problems like floods and the very real threat of disease. Aware of these threats, fear and hopelessness are beginning to pervade the tent camps.

Meanwhile Karuna Shechen continues to serve hundreds still flocking to the clinic and the monks continue to bring basic supplies and medical aid to remote villages. The UN hopes to hire guides and porters to get aid to these villages as well.

These acts and intentions toward compassionate action are in contrast to Qatar, which has banned all but 500 of the 400,000 Nepalese workers in that country from returning home for the funerals of friends and family. And the working conditions these Nepalese have found themselves in after being recruited to pull off the World Cup sports spectacle is horrendous.

Basically these workers are in a situation of forced labor where wage theft is common; they live in squalid living and working conditions that have already killed 1,200 workers since Qatar won its bid to host the World Cup in 2010. The corruption of FIFA is apparent from top to bottom and the world needs to become more aware of the ugly reality of this “beautiful sport,” especially when such inhumane treatment goes beyond adding insult to injury of so many Nepalese at a time like this.

Nevertheless, within Nepal, which was ill equipped to deal with double earthquakes, the government is struggling to maintain supplies of drinkable water, electricity, and food to all the survivors, and to get the children back in school.

And most of the world has helped this process enormously.