Fly Me: the First Time I Did Acro Yoga. 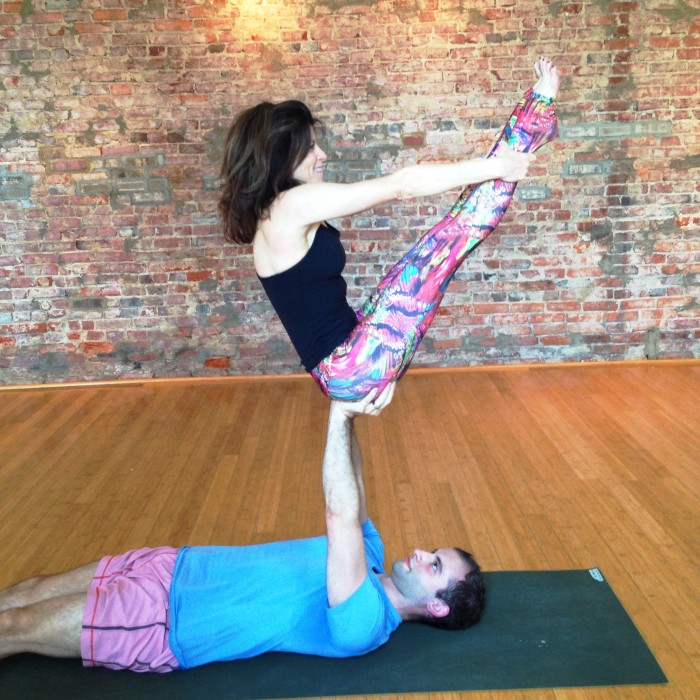 Fly by night, away from here. Change my life again. ~ Fly By Night, Rush

When I was little, my father used to fly me around on his feet.

He’d lay on his back and put his feet on my stomach and lift me into the air like Superman.

Other times, he’d lay on the floor and put up his knees. I’d climb on top and perch there, placing my feet in his hands, driving an imaginary car while I pressed into his palms with my right foot on the gas and my left one on the brakes.

Of course when my children were little I’d do this with them, too, only we’d drive on top of the bed to accommodate the wild turns. In addition to their imaginary stops for donuts, they’d steer recklessly from atop my knees, flying overboard in all directions for wild and crazy landings softened by the mattress.

And now, after all these years, I am flying again! There is something called Acro yoga, and it’s just the flying game all over again for grownups.

The first time I flew was a little over a year ago. It was a Thursday evening, and I arrived early to yoga. There was a young man in the class who was big on Acro yoga, and he was early, too.

He walked into the practice room and without saying anything pointed at me. Your turn!

And he lay on his back and put his feet on my stomach and lifted me into the air like Superman.

It was scarier than I had imagined! I had seen others do this before the start of class, and I thought it’d be a breeze. But I felt so high up! The floor was a long way down!

He guided me from my stomach to a seat atop his feet. I wrapped my legs around each of his, one at a time, and then I let go of his hands.  And I felt as if I could touch the ceiling if I reached up high, but I sat carefully in the air and instead put my hands in prayer. And he rested his hands by his sides and let me stay up there.

I don’t remember how I returned to my stomach, back to the tops of his feet and parallel to the ground again, but I do remember him telling me to tilt forward, so that my legs lifted to the ceiling and my torso dropped down.

And then he told me to keep diving, and I had to fully trust as I made my way through the air, upside down to vertical. Maybe he placed his hands on my shoulders to finally brace me once I inverted. I don’t remember.

What I do remember is that as I dove forward, balanced only on his feet, I felt a pull in my heart which surprised me.

I’d never felt that before! Flying on my father’s feet came close, but I was too young then to know how special it was to invest any trust. Maybe the pull was just my heart remembering, and that’s why I was able to dip it down so freely. Maybe that’s how my feet lifted up so easily.

Inverted, I had no choice but to keep fully trusting, and I wound up hovering there, eye to eye with this young man. And then, without missing a beat, I jokingly put my hands on either side of his face.

I love you! I exclaimed, laughing, upside down. And after this I’m going to tell you all my secrets!

Ten minutes of flying, and I was making jokes about love and trust and disclosures! And this surprised me, too, because these three things aren’t really such laughing matters. Truly, my efforts to balance them have been a little haphazard at best.

And that’s created for me a fear of flying, so to speak. It can be a long way down if I dive too fast.

It’s more than a year later, and now this same young man is an instructor. And it was another Thursday night at yoga, only this time he was our substitute instructor.

We did our Sun A’s and Sun B’s and moved into early Crows and other balances. Midway through, we were instructed in Supta Virasana, or reclining Hero pose. I sat with my legs bent at the knees, my calves folded against the outsides of my quads. My feet reached around and rested on their shoelace sides, and I lay back on the floor.

Are you okay like this? he asked. I nodded to indicate that all was well, and so he pushed his hands into my quads and lifted himself into Crow pose, taking flight above me.

And, as I did more than a year ago, I jokingly put my hands on either side of his face but this time pinched his cheeks so that he was the one who laughed.

After class I requested another flight. I figured I might be braver by now, that it might not feel so high, that the floor might not seem such a long way down.

So he lay on his back and put his feet on my stomach and lifted me into the air like Superman.

And again I moved into a seated position on his feet, and this time around it wasn’t so scary up there. In fact, I lifted my arms from my perch and waved at my friends below.

And then I moved into an Acro Shoulder Stand, inverting while holding his ankles before he caught my shoulders. I almost went overboard, but a fellow yogi stepped up to spot me. And from there I splayed my legs and bent them at the knees, so that I hung from his feet, upside down by my hips.

And then he told me to tuck into a little ball and reach through his legs to grab my own feet. And before I knew it I was spinning above his head as if I were a basketball atop a player’s hands.

Finally, I did my best to lift into a star, inverting into the sky. And I never realized that another yogi had stepped up to spot me, so that when I became a falling star I landed safely on my feet while still shining.

I’m not so sure when the next time will come for me to fly, but I do hope it’s soon. I need to balance and dive and soar, in order to practice all that love and trust and more.

Besides, now that I like it in the air, I’m not so scared to be up there. And that makes me so much lighter, which can only mean that I’ll fly higher.