Why Wait: A World too Busy to Pause. “What has happened to our ability to dwell in the unknowing, to live inside a question and coexist with the tensions of uncertainty? Where is our willingness to incubate pain and let it birth something new? What has happened to patient unfolding, to endurance? These things are what form the ground of waiting.” ~ Sue Monk Kidd

When first asked what I wanted to be when I grew up, I was probably three and said something cute like ballerina.

At 15 when I was asked, the answer was more loaded because I was choosing between physics or drama studies. By 17 I was being asked to choose a university degree.

I wanted to apply for a Bachelor of Arts because I loved history, literature and drama. I imagined a university where I would debate philosophy, get heated up over a sonnet and ferret out the dark hidden corners of Australia’s criminal colonial history.

My mother said that no child of hers would do an arts degree. It sounds harsh, but her words streamed right out of a society that has big opinions about real jobs that make real money (so you can buy a real house and have a real wealthy family). In Australia, that pretty much rules out art so before I knew it I was enrolled in a real degree that popped me out four years later directly into a job as a health professional.

I didn’t get to debate the finer points of Shakespeare but I could fetch a salary of $60K upon graduation, a ceremony I never attended because I was already working over-time in a new town.

I was off and racing right from 17, getting the grades I needed to succeed in life and my parents, friends and teachers were right there egging me on to make sure I wasn’t left behind: don’t take a gap year because you might never go back for an education, they said. Get a good job, buy property early, shore up financial security; marry young before the pool of men shrinks; have children before thirty to avoid birth defects; grab life with two hands, chase after what you want, make it happen.

Life was too busy to ask questions.

Monday to Friday I knew exactly where to be and what I would be paid—a transaction that told me precisely what I was worth. Saturday or Sunday the rest of life could get crammed in: friends and family, laundry, groceries, errands. The weekend might leave a few morsels of time where I could read or write, except usually I was so freakin’ tired I’d collapse in front of the TV.

In a world screaming Productivity! and Accumulation! I wasn’t encouraged to wait. Instead I was warned that to pause is to be left behind.

What if I hadn’t been asked, “What do you want to be when you grow up?” but instead was asked, “Who are you now?”

What if I was given the time to answer? Because this question needs time and nobody can answer it for me. I needed a protected waiting-ground, a safe container for incubation so that the uncertainty could just lie open; the question be suspended and valued in its unanswered state.

Asking What do I want to be? rocketed me forward into an imagined future which I modelled on the people around me. Who am I now? would have sent me inward to touch everything known and unknown already present within.

At 17 I had no idea what I wanted to be but I could have told you what I loved, what lit me up, what made me want to kiss the earth in gratitude. My love of arts mightn’t have led me into a secure and well paid job, but perhaps by exploring the things that awoke passion within me I might have illuminated my interior and found out who I was.

By focusing on my future safety, happiness and security I was handed answers before I even really asked the questions. By focusing on the future I raced right over the present which was a sacred and important waiting-ground.

Which is probably why when I finally did pause on a meditation retreat in my late 20s, I discovered I was living a life miles away from who I really was. I’d run so fast to keep up I’d never stopped to check if it was where I wanted to go.

I still don’t know what I want to be when I grow up but I have discovered the immense power of waiting. I have learnt to sit in the tension of uncertainty and simply become still. Once still, the inherent motion of life becomes apparent and I realise that I am intrinsically unfolding in a way that has nothing to do with willpower.

After so many decades of high-powered advise and goal-setting seminars, it is a great surprise to discover within something quite exquisite blooming all in its own time. I cannot tear the petals open without destroying the bloom. I cannot set a schedule and demand it keeps pace. I cannot neaten it or sanitise it. I cannot manipulate it or direct it.

I can, however, inhabit the pause, exist in the tension of not knowing, and wait. 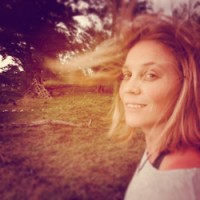