Developing a Home Yoga Practice: It’s Not About Discipline. 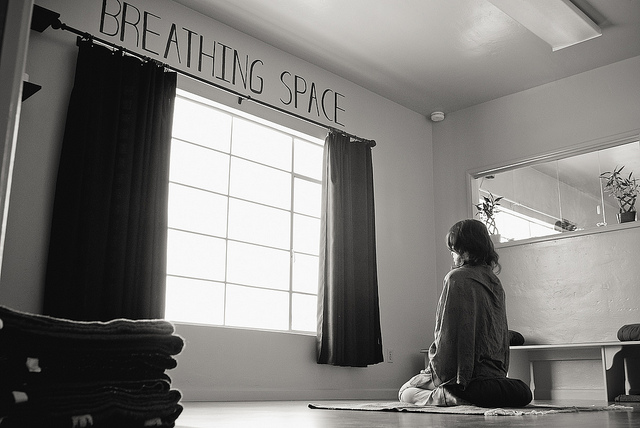 Discipline is a lie; habits are the truth.

When I ask my yoga students if they have a home practice, 90 percent of the time the answer is no.

When I ask them why, the answer isn’t what I would expect, which would be, “I don’t have enough time.” Almost universally they say, “I don’t have the discipline. I need a class and a teacher to motivate me.”

Most people can’t go to class more than a couple of times of week, if that.

Developing even a 15-minute a day home practice has profound benefits.

Patanjali’s Yoga Sutras says, “Practice becomes firmly grounded when well attended for a long time without break and in all earnestness.” (I-14)

We are creatures of habit, not discipline. Discipline is boring.

And discipline is a lie.

We all have habitual things that we do—some good and some bad. It takes discipline to change or create a habit. But after the habit has been established there’s no need for discipline—thank goodness.

If you practice yoga and or meditate, you know how good it makes you feel. And when you’re away from either for a while, once you restart your practice, you ask yourself, “Why don’t I have enough discipline to keep up my practice?”

I’ve been practicing Yoga for forty years and meditating for more than thirty years. That doesn’t mean, however, that I’ve always been consistent in my practice. There have been days, weeks, months even, when my practice was scant to nonexistent for whatever reason or excuse I conjured up in my mind.

They were always good, justifiable excuses.

Even as a teacher, sometimes the only yoga I practiced were the poses I demonstrated to my students. When I was teaching ten classes a week, that was one of my good, justifiable excuses—“well, I’m doing a practice when I teach.” Most students think we teachers “walk the talk.” We don’t always.

In the wonderful book, The One Thing-The Surprisingly Simple Truth Behind Extraordinary Results, Gary Keller completely debunks the idea of discipline. Now this is one of the most successful businessmen in the United States. So if he says discipline is a lie—believe it.

“Achievement doesn’t require you to be a full-time disciplined person where your every action is trained and where control is the solution to every situation. Success is actually a short race-a sprint fueled by discipline just long enough for habit to kick in and take over.”

According to The One Thing, in a 2009 study, researchers at the University College of London discovered that the “point of automaticity” came on average at 66 days. This differed depending on the person and on whether the behavior was easier or tougher to establish. But 66 days was the sweet spot.

So I decided to try this with my asana and meditation practice. And it worked! There was not a single day in 66 days that I didn’t go to my mat for my asana practice and my cushion to meditate. And it got easier and easier as time went by. It’s true—“once a new behavior becomes a habit it takes less and less discipline to maintain.”

I knew the habit had kicked in when I had to leave New Jersey at 6:00 a.m. to drive home. Then I had a full day of work ahead of me. Normally I practice in the morning and would never have the wherewithal to practice at night. I was almost ready to go to bed when I remembered I hadn’t done my practice that morning.

Even though it was short, I did it. That was at around day 46.

And there appears to be a kind of halo effect when even one positive habit is created and firmly established. In The One Thing, Australian researchers found that “students who successfully acquired one positive habit reported less stress, less impulsive spending, better dietary habits…and even fewer dirty dishes.”

We are all pulled in so many different directions and as our energy and will-power are sapped, so is our discipline—so why should we rely on something so easily self-defeating?

The name, The One Thing refers to the question, “what is the one thing you can do today, such that by doing it, everything else becomes easier or unnecessary?” I know that if I consistently do an asana practice and meditate, everything in my day will go better, no matter what obstacles are thrown in my path.

I will be more focused. I will handle all problems, disruptions, and issues with greater ease, awareness and clarity.

Life will be easier and stress and anxiety, unnecessary.