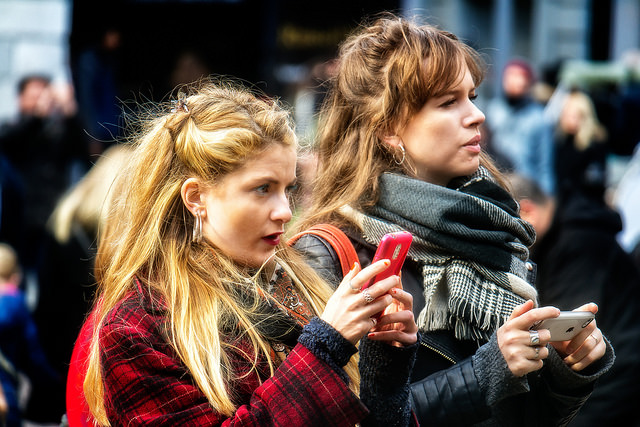 We’re all guilty of it—purposely posting misleading photos and statuses to portray a certain image of ourselves in the social media world.

With the rise of filters, photo apps and Photoshop, it’s hard to discriminate between what is real life and what’s intended to create a certain impression on Facebook or Instagram.

Social media has changed our world—for better and for worse. Never has it been so easy to keep in touch with family, friends and acquaintances without wasting a whole lot of time on the phone for an hour just to find out what they’ve been up to.

Instead, we can know everything about them in one click and a few minutes of scrolling—what and where they ate this weekend, who they spent time with, how they’re feeling, how big their kids are getting and even what their vacation plans may be for the holidays. “Just booked my trip to Hawaii! Mai Tais with Santa!” (Actual Facebook post from a friend of mine yesterday.)

Personally, as someone who lives 3000 miles away from my entire family and a large chunk of my childhood friends, I bow down to social media. I am able to keep in touch with everyone I’ve ever known through this revolutionary new world and I take full advantage of that.

But what bothers me is watching how completely paranoid, insecure and bat shit crazy some of my friends get over some of the social media games we’re all playing.

I watched a friend of mine obsess over one guy’s daily additions of new female friends. She managed to create an entire story in her head about what his motivations and intentions were behind this move: he’s a “flirt,” he’s “feeding his ego,” he’s playing mind games, he’s trying to make her jealous.

Truth be told, I’m pretty sure he was just accepting friend requests as they came in and not giving it a second thought.

I’ve watched other friends post cute selfies of themselves and then end up disappointed at the lack of “likes” they have gotten. Or worse yet, if someone in particular that they were hoping to impress with their cute selfie didn’t take the time to hit the “like” button.

Another friend was downright livid that someone she had a crush on was “liking” a bunch of other girl’s photos and status updates and ignoring hers.

Truth be told, it’s really sad to think about the effect social media has on all of us.

I have actually lost count of how many relationships have broken up over discoveries on Facebook. The great thing about social media is you can instantly chat, message and post pictures of what you did last night in an instant.

The downside of social media: your chats, messages and photos of what you did last night can get you in a whole lot of trouble.

I have seven friends in the last two years alone, whose relationships ended because they discovered their spouses or partners were cheating on them through social media. Gone are the days where people would just sneak off to a hotel room and the only way of getting caught was if someone saw them.

Today, all you need to do is forget to log out of your account. Or have someone accidentally tag you in a picture with someone or somewhere you never told your spouse you were going to be. Or your location shows up on their phone when you’ve told them you are somewhere else.

Affairs are pretty much a lost cause these days with the internet. If you’re having an affair, most likely you’re going to get caught through social media.

Is What We See Real?

Yes, a lot of what we see and read about our friends and family on Facebook is very real. And beautiful. And heartwarming.

I love seeing pictures of my nieces and nephews running on the beach together with the seagulls following their laughter in the background. I smile and feel a part of birthday parties and weddings that I can’t be at when I scroll through an album a friend of mine posted of the event.

I laugh and often share with my own children videos of funny moments my friend’s post of their children doing something silly.

But don’t compare your life with someone else’s based on what you see them post.

We don’t know if someone is fighting depression.

If a marriage is crumbling. If someone’s child is being bullied at school.

If the girl you like actually likes the guy whose wall she just wrote on.

So, let’s stop making up stories based on what someone is doing on Facebook.

Instead what we can do is use Facebook for what it’s intended—keeping in touch with people we don’t often see, giving us something to do when we stand in line at the grocery store and brainstorming on the next great selfie we’re going to take.

It’s all in good fun—if we use it that way.

Please Don’t Envy Me: The Facebook Status Everyone Should Read.