The Heartbreaking Life of Kaavan the Elephant. 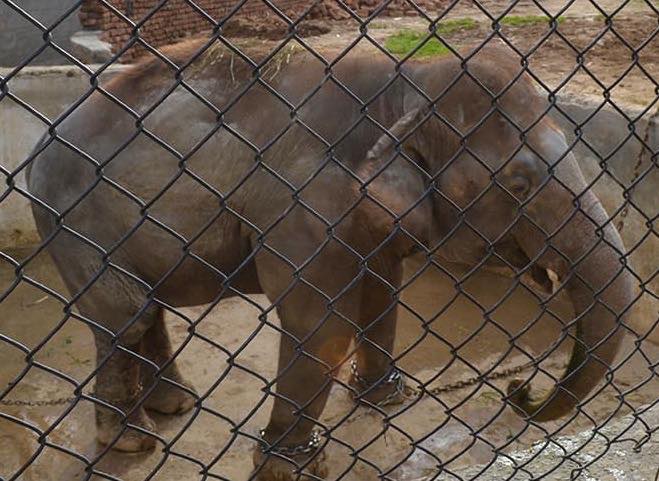 Editor’s Note: This article has been updated based on recent changes in Kaavan’s situation. ~ed.

Imagine if you lived in chains in a concrete enclosure for twenty-eight years with trees and bushes nearby, but unreachable to you?

This is the pitiful life of Kaavan, an elephant that was sent to Pakistan’s Islamabad Zoo (also known as Marghazar Zoo) three decades ago from Bangladesh.

This summer, a tourist visiting the zoo was outraged at the horrid condition of this lonely elephant. She observed him swaying his head from side to side, a behavior known as weaving, which elephants exhibit due to stress and depression.

The pathetic sight of Kaavan prompted Samar Khan to start a petition asking the zoo and the Capital Development Authority (CDA) to release him to a sanctuary.

The global pressure from messages posted on both the zoo’s and the CDA’s Facebook pages, as well as emails sent and calls made on behalf of Kaavan, resulted in the CDA requiring that the zoo remove his chains. This seemed like a step in the right direction for Kaavan, although the ultimate goal of Ms. Khan’s awareness-raising efforts is to bring about his release to a sanctuary.

After nearly three decades of being chained up, this elephant deserves more than anything to be in a natural setting, where he is free to roam and enjoy the company of other elephants.

The zoo claims that Kaavan is used to his enclosure and doesn’t mind it, which is the most absurd perspective. Who would ever not mind being chained up? The enslaved elephant’s reaction is observed in the way he repetitively bobs his head. Is that a sign of an elephant who “doesn’t mind”?

A report by The Express Tribune said that the zoo proceeded to unchain two of his legs, as if they were improving his condition. This minuscule change is hardly notable (what’s the difference between having four legs or two legs chained?)

It was also observed that the zoo unchained Kaavan to go on brief walks with a handler, but then he was chained back up afterwards. It almost seems worse to give him a small taste of freedom from chains, only to then put the shackles back on.

Although the most recent update is that he is currently unchained as of yesterday, the CDA has gone back on their word before, so we can’t count on this decision. The ultimate freedom to work towards is for him to be released to a sanctuary.

Since hearing the story of Kaavan recently, this poor soul has been on my mind. Seeing a photo of him in his barren, run down, concrete enclosure with chains around his feet is nothing short of devastating. If I were to ever find myself in Pakistan, I would probably camp out in front of his enclosure until they agreed to release him. Such is the heartbreak I feel over animal cruelty and mistreatment.

What right do humans have to dictate and control an animal’s life this way?

Sitting here in my comfortable little home in the United States, I wonder: what can I do to help an elephant like Kaavan who is all the way across the world? How can my voice be heard on behalf of his miserable situation?

I signed the petition and shared it on Facebook, emailed the Chairman of the CDA, the Pakistan Embassy, and the Prime Minister’s office, and emailed two elephant sanctuaries I know of in Thailand that might be able to help.

What else can I do besides pray to the universe to release him from his tragic enslavement?

The goal of the “Free Kaavan the Elephant” Facebook page is to put enough pressure on the CDA to release Kaavan to a sanctuary. This needs to be done as soon as possible, as Kaavan’s health is compromised—he already has gangrene- prone gashes on his feet from the chains. An elephant that previously lived there died as a result of gangrene and neglect. Her name was Saheli and she was twenty-two years old.

Elephants can live up to seventy years old in the wild. They are emotionally complex beings who form strong social bonds with other elephants. In a natural environment they are active up to 18 hours a day and can cover more than 30 miles in a day.

Kaavan has been denied everything that is humane. He has not one aspect of freedom in his “home.”

The Islamabad (Marghazar) Zoo has a history of deplorable conditions and neglect of their animals and several big cats have died as a result.

I don’t see how anyone could visit a zoo like this and not feel at least somewhat depressed. This establishment should really be called the Islamabad Torment Camp.

Please help give Kaavan a voice by signing this petition and sharing it on social media, and sending emails to these Pakistani agencies: