What it’s Like to be Homeless & Lose Everything: Lessons I Learned. {Adult} 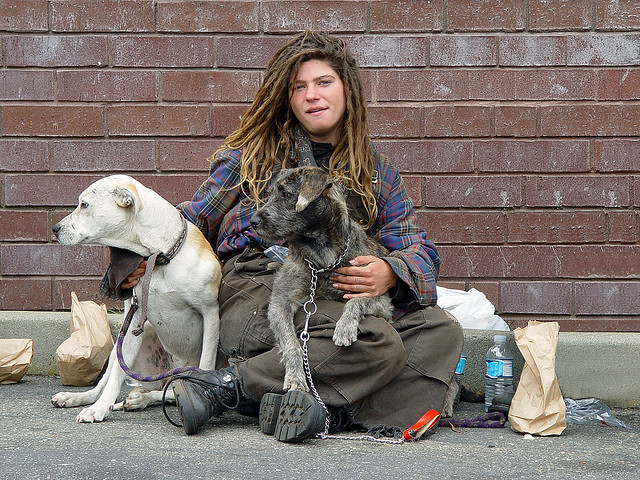 **Dedicated to Chelsea Madrigal, who opened a door for me.**

We’ve all seen them. Those glassy eyed kids slumped on a city curb, singly or in twos, maybe with a filthy dog, probably  with a make shift sign, “Hungry. Please help.”

They’re not old, they’re not war vets, they don’t have physical disabilities. Why are those kids there, we wonder, as we either step over them or look at them pityingly and drop a quarter into whatever receptacle they have supplied.

When I first moved to New York at 22 in the early 1990s, I lived in the East Village. My building was an old tenement house, not yet gentrified and swarming with roaches.

It didn’t matter; I loved it.

Every night when I came home from my waitressing job, I stopped to get a slice of pizza at Ray’s and then walked down my street listening to the music drifting out of Deanna’s, a jazz club that burned down years ago.

To get into my door, I had to step over a pile of human wreckage—at least, that’s how I thought of it at the time. Heroin addicts and squatters—people I would have realized were around my age had I bothered to look—always ended up on my stoop. Sometimes they were unconscious, sometimes their needles had rolled on the ground away from them, once a mad-eyed girl drenched in sweat began screaming when she saw me and grabbed at my pant leg.

I tiptoed past, accepting this level of interaction but no more.

What the hell could I do about it anyway, I thought to myself. I pulled the old elevator door shut and glided up to my apartment where I had a bathroom, a bed, a phone, a roommate—all the things that made me “normal.”

Three years later, I was the one being stepped over.

It started, ironically, with a love affair.

I met a guy—handsome, brilliant, charismatic—he swept me off my feet, and I had no idea he was a narcissistic drug addict.

By the time I found out, it was too late; I was “in love,” or, more accurately, entrenched in codependency.

Our spiral into homelessness started out as vague irresponsibility—something with which I was totally unfamiliar. I was the upstanding citizen, the rule minder, the girl who never wanted to be in trouble so she never did anything wrong.

When he first marched over some late notices for our phone bills on the way to the kitchen to cut up a bunch of lines, I laughed along nervously. By the time the sheriff came to kick us out of our second apartment (a mob flunky kicked us out of our first), I wasn’t laughing anymore.

The first night, we just walked. Up and down the streets, from one end of Manhattan to the other—strung out on coke, penniless. We belonged nowhere. There was nowhere to go, nowhere to be, nowhere to rest. The dirty curve of the city sky took no notice as we blew from block to block like so much wind-strewn trash.

The places we stayed over the next year stand out to me like flashes of lightening in a dense black night.

The dock on the Hudson, huddled around a meager fire with a huge group of other homeless people who fished and bathed in the oily water, and who convinced us to do the same.

The train out to Long Island, and the phone booth in Montauk at the end of the line, where we would crouch together miserably trying to stay warm until the first morning train to the city rolled back in and we could lay down on it’s empty benches for a little while.

The Yale campus, where my boyfriend had gone to school. We hid in the library, washing our feet in the sink, roamed the dorms stealing clean clothes because we had none, and snuck into the dining hall where I stared, bug eyed, at the beautiful architecture and stained glass as I tried to cram as much food down my throat as possible.

Bryant Park, where we were awoken after a 20-minute desperate slumber under the boiling sun by an orchestra warming up and a cop tapping the bottoms of our shoes with his billy club.

The roof of my apartment building, which we got to by using my old key. As we climbed silently up the stairs I ran my hand along the outer wall of my one-time bedroom, mourning my own death—the death of the girl who slept in cool sheets, who had friends, and sometimes even flowers in her kitchen.

Every place we went, we were unwanted, the clock ticking down our departure before we even arrived.

Once you slip down the sides of such a deep hole, it’s remarkable how hard it is to climb back out.

With each day that passed, we were less like the people we had once been. We were strays, a public nuisance, and it was only the raw instinct for continuing to draw breath after breath that kept us from collapsing once and for all and letting the city absorb us into its body—down through the sewers and into it’s rat-filled veins.

Now, I am once again a person who belongs, who has a clean bed, and who sleeps under a roof rather than on top of it—but it doesn’t always make me any more adept at reaching back across the abyss.

I remember the rare moments of grace from my dark time.

A fellow homeless woman, very advanced in age, insisting that I share half of some leftover Chinese food that someone had given her.

A man, named Larry Whipple, who sat with me for a few minutes in the waiting room at Penn Station where I was camped out, and for no reason that I can now discern wrote me a check made out to cash for $50. (Larry, if you’re out there, I have always wished I could pay you back.)

A girl who let us sleep on her floor in her apartment in Washington Square Park—though she barely knew us and we were the worst possible houseguests anyone could ever have—and who remains my friend today.

There weren’t many others. We were mostly met with derision, or just ignored.

But would I have ever have fought my way back to the surface without these act of kindness? I don’t think so. If I had, it would have taken a lot longer and I wouldn’t have come as far.

Compassion is a mighty tool.

The merest whisper of it carries more power than most of us realize. One kind glance, one hand outheld, one moment spent really listening can be the thing that triggers change.

Not everyone will be ready to accept our love or our kindness, but if we are willing to offer it, eventually it will land in a place where it can take seed.

When I see kids now like the kid I once was, or anyone trapped in poverty, mental illness or addiction, I don’t assume I can save them. I realize that the circumstances that led them there are complex. But I always look for an opening. A cracked door through which I can make some kind of meaningful contact.

If the door is closed, I allow myself to move on, but if I can see a sliver of light, I will knock gently.

One of the many lessons I learned from being homeless is that kindness is never wasted, even when we can’t discern its immediate result, and, conversely, that cruelty never happens in a vacuum, but always has negative repercussions.

Knowing that, I can choose kindness confidently, never doubting that is my true north.

How do we help people who are suffering rather than simply stepping over them?

Just being willing to slow down, feel them in our hearts and let them know they’ve been recognized can be enough.

What is Your Most Prized Possession? Here’s how 5 Homeless People Responded. {Adult}