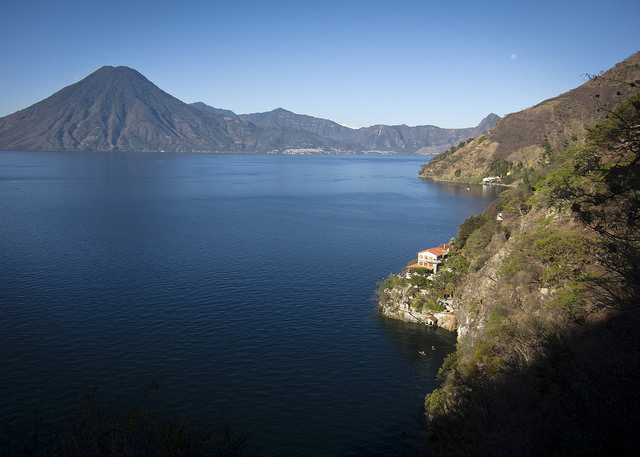 I didn’t leave because I was disillusioned.

I wasn’t running away from anything. Not consciously.

Soon after arriving, I got the gut feeling that I’d be staying abroad a long time—though at the time I didn’t know whether I’d stay in Guatemala or try my luck in another country, like many friends and colleagues.

I was immediately free—as in the opposite of busy.

It was so liberating! Even in a dangerous, dirty, foreign city—I was free. I’d been busy in Austin. Lots of work, both during and after school hours—family visits, dinner parties, chores, errands, grocery shopping. Suddenly, I had no obligations (other than work, and my job was a lot less demanding than it had been in Texas), no plans and no expectations.

In retrospect, it almost seems as if I was fleeing from something specific when I left home, but I really wasn’t aware of it at the time of departure. That “something” is best summed up as The System. I was stepping out of the frame, quitting the race, moving off the national grid and opting out of my chosen (and initially beloved) career as a school teacher.

Today, I’m just as disillusioned with the field of schooling and “education” as I was when I left my first career in advertising and marketing—if not more so. Because I never saw advertising as I saw school teaching—as worthwhile, inspiring and important. Now, I see traditional schooling for what it is—a way of training the masses to be oppressed. But that’s another story.

After three years of living in Guatemala City, I was in for another huge shift in lifestyle—the biggest ever—becoming a mother.

I met my partner, got pregnant and moved to Lake Atitlan in 2012. I became immersed in the colorful, complex Maya culture. (The world did not end that December 21.)

For the first three years at the lake, we lived in, or near, Panajachel—a bustling small town with a unique mix of local Mayans, long term expats and short term volunteers and tourists.

Just over four months ago, life shifted yet again. We moved across the lake and into our own home, on our own newly bought land. We are really off the grid now.

Disclaimer: I am (was) a Spoiled North American Woman.

It never really crossed my mind until adulthood that some people (a.k.a. most of the inhabitants of the Earth) actually live without a washer/dryer. Or a dishwasher. Or a refrigerator. Those handy home appliances are standard in my country, at least for the middle class and higher income brackets.

So, when my family took a great leap into the muddy unknown, we became (somewhat unwittingly) a whole lot more sustainable, at least as far as our carbon footprint. My little family (hubby, toddler daughter and myself) moved to a new place—a place we had sought and bought with the profit I made from selling a house I’d owned for nine years in Austin.

So now we live on a few acres of land in a little two-story house. And by little, I mean tiny—it’s just under 400 square feet. It does help that this land and house happen to overlook majestic Lake Atitlan, the sparkling blue rural Guatemalan lagoon.

Forgive the too-much-information, but I feel compelled (and a both little proud and a little ashamed) to tell you that since that day, I dug holes and shit in the woods. I did this for the six weeks until our dry composting toilet was ready. I bathed precisely twice a week, thanks to the generosity of a dear friend and neighbor whose running water and delectable solar shower is just a 10-minute hike away—until our rainwater collection system was complete, and our solar shower became functional, after almost three months!

My beat-up old 1993 Mitsubishi definitely could not handle the rocky roads in our new neck of the woods, so we sold her. No more car. Public transportation only—moto-taxis and boats locally, buses or shuttles if we need to go further, and perhaps one day next year an actual airplane ride. Although, for now, our time, energy and money is going into home renovation projects.

For the first two weeks of our new residency, we had no power. We burned candles at night. Then, we got our solar power system all set up, which allows me to work and write from home, thanks to the sun. The wonders of technology!

This experience has reminded me how flexible and adaptable I am/we are. How we humans can pretty much get used to anything, for better or worse. And how to be grateful for the little things.

My daughter Jade is a great teacher in this regard. Whenever she spills or breaks something, she has taken to saying, “No importa, mama!” (or papa). Translation: it doesn’t matter. It’s gonna be okay.

Sometimes, I have to remind myself—I chose this.

Although I’ve been gradually moving further and further away from the lifestyle I led in the U.S. for the past six years, this was no doubt the most drastic and sudden shift into shocked sustainability. I would wake up feeling a mix of anxiety, fear, excitement, boredom, curiosity and doubt most days.

Now, I’m feeling more and more settled all the time—both in my own skin and in our new house. I have lightened up, and I am learning to live by the mantra of my little girl: No importa!

7 Things I Don’t Understand About My Own Culture.