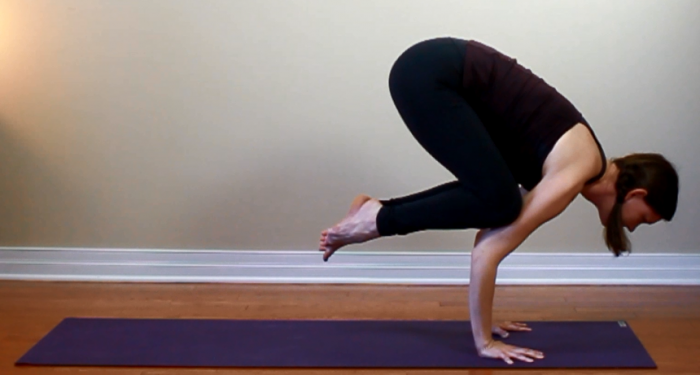 It’s that dreaded moment in class again—it’s time to learn and work on Crow pose.

The first time we learn something, it is always by accident.

I’ve even come to think about learning a skill—like music, or cooking, or (dare I say) crow pose—as a process of elimination. We first learn what not to do, and then accidentally happen upon a moment of genius talent that makes it so that we feel like we are both good at doing whatever it is we’re doing and we’re enjoying the hell out of it.

The first moment of genius talent is always an accidental moment, which while we don’t have control over when it hits us, are almost guaranteed if we spend enough time practicing something.

And with enough repetition of this, we end up learning how to do something that we Love (with a capital L), and we learn how to do it really well.

Accidentally happening upon a moment of genius talent and then creating the conditions to repeat it many times is the basis of all skill. The repetition is what turns our accidental skill into an intentional and cultivated skill.

One of the best ways I’ve found to repeat something is to “chunk it up.” In regards to crow pose (or any other asana), it’s about breaking the posture into all of the varying constituent elements that eventually add together to become the full pose. This is good news, because while the full version of the posture may seem intimidating or downright impossible, its elements are relatively simple and easy to understand.

The trick is to identify what crow pose is really asking of our bodies, and then to practice those elements in easily performable ways, many, many times.

Let’s start with the strength elements: the spine is in flexion, meaning that it curls into itself like a little roley-poley bug. The low belly is hard at work holding the spine in this flexion, otherwise the spine would flatten out, which makes it really hard to balance (the key is to make yourself as compact as possible). The hips are externally rotated to bring the knees to the outside of the arms, and the inner thighs are turned on as loudly as possible, because without them doing work to hold the legs outside the armpits, the arms will absorb the weight of the legs (and as the thigh-bone is the second heaviest bone in the body—the pelvis is the largest—that’s a lot of work to ask the arms to do—poor wrists!).

The hips are also in flexion, which means that the thigh-bones are working themselves as close to the heart as they can, which is practiced every time we do a standing forward fold (or any other fold).

These elements are found all over the asana practice, so they are easily accessible and ready to be practiced just by flowing through some sun salutations and observing the similarities between postures.

The second element of crow pose, which is usually the element of the pose that trips people up, is the balancing aspect. Just practicing downward facing dog and caturanga are already prepping the body and the shoulder girdle for taking flight. I think the biggest key to nailing this element is: don’t get discouraged! We practice walking and standing on our feet all day long! It would be silly to assume that we are as coordinated or abled to stand on our arms, even with five minutes of daily practice. But that five minutes of daily practice will go a long way.

The trick is: keep practicing. The more you practice, the more you open yourself to those scattered accidental moments of genius talent, which, when encountered often enough, with enough repetitions, will turn into a cultivated skill set that you can call upon whenever you wish.

The same way Jimi Hendrix learned to play the guitar, so we too shall learn to do crow pose.

I’ve prepared a 40-minute at-home CrowFlow, breaking down the posture into all of the strength elements and emphasizing them along the way so that you come into your own understanding of your bodily successes and limitations.

If you’re ready, clear out some space, roll out your mat, and let’s get to it. I love practicing with you.

The Yolk of Yoga.

I Don’t Want To Want That: How Sharing An Elevator Ride With a Rich Man Made Me Re-Evaluate Money.