Gun Control: Congress versus The People. 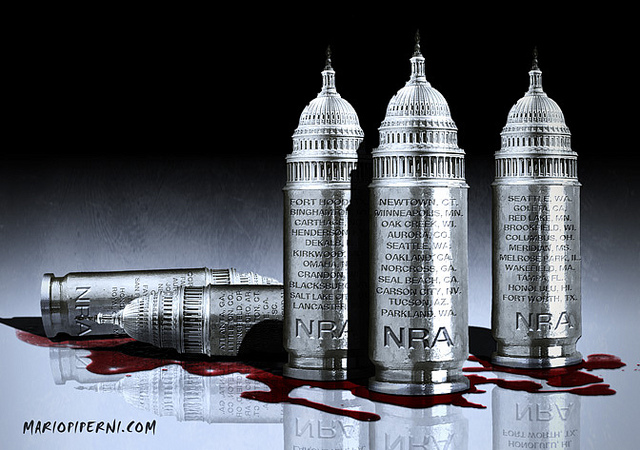 How does an issue such as gun control—widely supported by a majority of the public—get no action from our “elected” officials?

Trying to understand American politics and the processes of elections and passage of laws is enough to make our heads spin.

It’s no wonder that many Americans don’t try to understand the system—much less take part in it.

In the wake of another mass shooting, President Obama cited polls that find, “the majority of Americans understand we should be changing these laws.” As for the press coverage of this issue he said, “I can imagine the press releases. We need more guns, they’ll argue. Fewer gun safety laws. Does anybody really believe that?”

A July survey conducted by Pew Research showed that 80 percent of respondents were in favor of laws that prevented mentally ill people from buying guns, and 70 percent were in favor of a national database for gun sales.

Yet the Republican-led Congress will pass no regulation.

In this instance these numbers mean nothing; what matters is the opinion of Congress, and they are anti-gun legislation at the moment.

How is it that our elected officials don’t represent the opinions of the people?

This is where the spiral begins.

Congress represents the views of the people who hit the polls on election day, not those who speak up in a poll. Sometimes the views of more populated states are outweighed by those less populated states that are more likely to be anti-gun control. For example, in the Senate—which currently has 54 Republicans and 46 Democrats—the individual state populations are the key. The votes of senators from pro-gun Wyoming (population 584,153) have the same weight as gun-control supporting senators from California (population 38.8 million).

So no matter how many more people live in a state, the two senators from that state get no more weight than a sparsely populated state. Yes, this makes for “fair” voting, but on such controversial issues as gun control, maybe the people should get more of a voice.

Can we get a popular vote on this issue?

For example, a state like Illinois or California that has a large majority supporting gun control is outweighed by pro-gun states like Alaska, Nebraska and Alabama, with a fraction of the populations. It’s madness!

In Congress, 70 percent of Democrats supported gun control measures such as a ban on assault weapons, while just 48 percent of Republicans supported the same ban. Amazing that such an issue brings up such vast differences in opinions within the government when most average Americans I have spoken with agree with me: Something has to be done.

Congress isn’t just against high-profile gun regulation—even the measures supported by a large majority of the American people— it also prohibits federal efforts to conduct research on the causes of gun violence!

I’m all for guns. I enjoy shooting target practice, and I believe I have the right to arm myself in my own home. Do I believe I need to be armed with an automatic Uzi-submachine gun or an AK-47? Not so much. Do I believe anyone really needs those weapons? Not unless we are going to civil war. Do I appreciate them for the collection appeal and fun at target practice? Absolutely.

The Second Amendment was written to protect the people of America from their government if need be. That is why we have the right to bear arms—in a well-regulated militia, not anytime a misguided person wants to be armed—to keep the government in check, if needed. Where this got lost, I’m not sure, but it has.

The NRA has no business in politics.

Republicans and the NRA have been in bed for years. The party uses gun control scare tactics to keep many people voting their way. The Democrats will take away your guns! We’ve all heard it.

(And just to clarify, I am quite moderate; I share many views with both parties. I vote for anyone that I feel will bring more good and peace to the world, which is becoming quite a difficult task lately.)

I believe an outright ban will never work here, even though countries like Australia have disarmed their citizens, seeing way less gun violence since. It would be very similar to the war on drugs—a street-level black market would rise up and the problem would be worse than it is now. Laws are for law abiding citizens, and most of the gun-related tragedies that occur are committed by unstable members or criminals.

This is an issue, I believe, that the Federal government needs to butt out of, allowing each state’s representatives and bodies to reflect the will of the people in that state. People should then have to respect the laws of other states when crossing state lines.

And voting—I know it seems futile, like our personal votes don’t weigh in, but collectively they do! And not just in presidential elections; I know I am guilty of skipping midterm elections.

During the 2014 mid-term elections, just 36% of eligible voters went to the polls. And in states and districts where it counts, many of them voted for Republican candidates picked in primaries by just 9.5 percent of US registered voters.

In these tight race elections over hot, divided issues, it’s the gun control views of that 9.5 percent that make the difference in the way the government sways.

Got an opinion? Vote.

Despite what the NRA tells US, Gun Owners overwhelmingly support more Gun Control.