My Marriage Freaks Me Out. 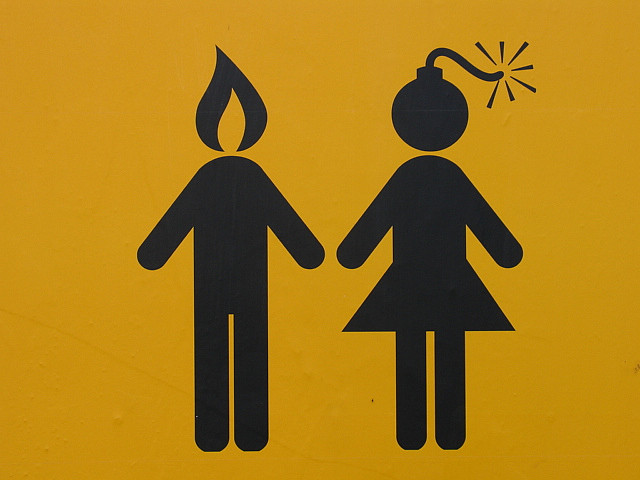 Throw marriage to the dogs and ring in the divorce papers—it’s a naysayers party and it seems we are all invited! Or, at least that’s how it feels. It seems that talk about marriage gets more alarm bells ringing than wedding bells, more fisticuffs than kisses.

What ever happened to happily ever after?

My husband and I got married just one year after our whirlwind romance began. After our second meeting, I basically moved in. Staying for a couple of nights in a row meant I needed some fresh panties, my school books, my toothbrush and of course my plants couldn’t go without water in all that time. The plants though, were just an excuse to move in quicker, because I knew from our very first night together, that he was the one.

I know what you’re thinking—most likely the same as everyone else. And, I mean, how could you not?

If anything, you’re in the same boat as me, peeking through your rain jacket just trying to weather the storm. Chances are, you have just as many friends tying the knot as you have scrambling to untie it.

And if this isn’t you, then you’re most likely on the second boat, which is gruesomely overflowing with people who are trying to grow extra fingers and toes so that they can keep up with break ups, let downs and divorces.

It’s hard to keep a ship from sinking when life keeps drilling holes into the bilge. If it’s not our past relationships that have calloused our hearts, or the excessive amount of fingers and toes we’ve grown to keep up with the cracking of hearts, then it’s the media adding weight to an already sinking ship.

“The Four Signs Psychologists Use to Determine your Divorce”

“How to SAVE your Marriage”

How about star signs and academic TED talks that spout off the cemented personality traits of your lover and the science behind why he/she cheated. Whether it’s the ever-changing technological “battlefield” or the astrologist who said you’d better make the switch, because your current Capricorn just can’t live up to a Libra in the realm of love making—we are constantly bombarded with messages that failure is inevitable.

Monogamy is as old as religion and we all might as well just jump ship, because the titanic isn’t the only ship that lay at the bottom of the ocean.

Knowing all of this, getting married seems extremely illogical and foolish, especially as quickly as I did, and people are not afraid to highlight your idiosyncrasies.

When we announced our decision to spend our lives together, I was questioned by many. “Are you sure, I mean you have only known him for seven months,” or “Megan, you fall really easily, are you sure this is what you want?” And my personal favourite: “So you finally found a way to stay in the country.” (For those of you who don’t know, I am a Canadian living abroad and yes, when I met my husband our love affair required a marriage certificate.)

However, those who know me and even those who don’t should also know that I don’t take matters of the heart lightly, and neither does he.

But I get it—we are all programmed to “hope for the best but prepare for the worst.” I understand the statistics, that you are “speaking from experience” and that “you’re just looking out for me,” but let’s just for a second listen to my version of reality.

I had a dream, and I made that dream come true. One of my many dreams was to find the love of my life, and hold onto it for a lifetime. Sink or swim, I found the one, and just as I have the choice to dream, I also have the choice to keep it alive.

My eyes are wide-open to the possibilities, and to the painstakingly hard work that can be involved, but my eyes are also glistening at how beautiful the reward. My decision to love my husband, is to me, like the decision you make when having a child. I am sure there are days when strangling your potty-mouth kid seems like the best of ideas, but we refrain anyway because a life without our children would be a life with no water to drink and no sea to splash our feet.

So yes, we all have choices and I made mine. But why?

I mean, as recent history shows, I’ve supposedly just signed a ticking time bomb. Well, in a monsoon of voices, I have found refuge in my own, but that didn’t just happen overnight. Once I graduated high school, I left home unknowingly for good—because I felt the world could teach me a thing or two. I dated and played around. I had one night stands and long-term relationships. I’ve been the cheater and the broken heart. I’ve learned a second language, posed nude—for art purposes of course—and been on both sides of the consciousness spectrum. I’ve met people who left lasting scars and some who have left me forever grateful. In essence, what I am trying to say is that the attainment of one voice, is in the weeding out of many.

In all honesty, no one knows what the future holds. My path won’t necessarily look like yours or vice versa—I just hope it is one you’ve paddled through yourself. Let the voices that surround you be a reflection in the water, but never be afraid to cast some stones on it. Our instincts are sharper than we give them credit for and our gut feelings more useful than we sometimes allow them to be.

Regardless, I understand this isn’t the easiest task for many of us, and that the complexities of what I am saying, go far beyond my words. In the end, I am just trying to say that marriage doesn’t have to be for everyone, but neither does divorce. Just as you have the choice to walk away, you—in many cases—have the choice to stay and make it work. You also have the choice to say no, “marriage isn’t for me,” and that my friends is also okay.

My hope is that marriage does not continue to be a lifeboat, nor a stop-off in the “tour-de-la-vie.” My hope is that we all save ourselves a little misery and build our own foundations, our own love stories. Let’s give a little magic back to the idea of marriage, a little romance back to happily ever after and at last, just a little more faith in us.

Connecting with the Nature Spirits.