Pope Francis, Kim Davis & “The Danger of a Single Story.” 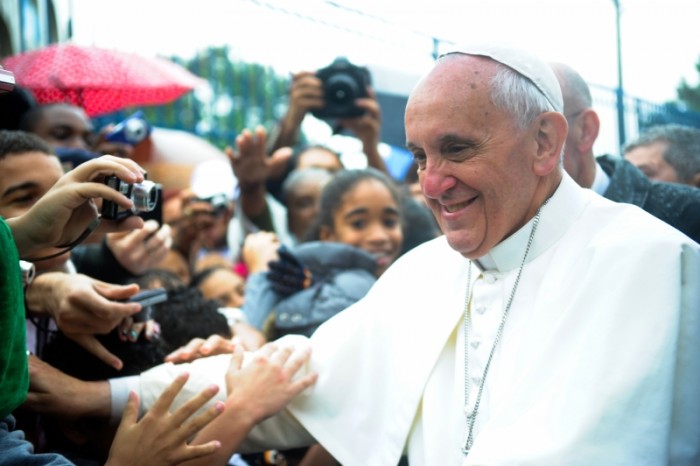 I am not Catholic—I’m not even a Christian.

I have no stake in defending Pope Francis or the Catholic Church from critics. But what I saw unfold from liberals and the left when the news broke that the Pope had had some kind of encounter with Kim Davis, was frankly shockingly reminiscent of the most egregious right-wing vitriol. The speed with which conclusions were jumped to—and the leap that was made from the “meeting” to every possible grievance people had against the Catholic Church—was astounding and disappointing.

But there is great danger in reading only one single story.

When Reuters broke the news on September 30th, I was the first person to respond to their Facebook post about the “meeting.” Here’s what I said:

“We have no idea what he said to her. He could have told her to get a life and do God’s work in a more worthwhile endeavor. I don’t like this speculation and innuendo about the meaning of the visit. Unless the Pope comes out publicly against Gay marriage, which would indeed be disappointing, I’m reserving judgment.”

There were about 45 “replies” to my post, many of them misinformed accusations that totally accepted the very first story that was reported before any real facts were known.

When I wrote a post on my own Facebook page basically reminding people we didn’t have all the facts, and that the Pope certainly did not schedule his own meetings with the general public, I was surprised that many of my own friends also immediately jumped to conclusions with comments like “his secret meeting” and quoted Kim Davis’ words that “she felt honored” as if they were unequivocal truths.

More of my friends jumped to negative conclusions than I would have expected.

One person even tried to make a correlation between the “meeting” and the fact that one of her son’s friends committed suicide, suggesting that the Catholic Church’s opposition to Gay marriage, and thus the Pope, were somehow responsible. That was a stretch beyond my comprehension but she continued to defend this position in later comments.

It has now become pretty clear that the Pope was set up. The “private meeting” was not private and  wasn’t much more than a rope line. The words he uttered to “stay strong” were probably said to everyone of the several dozen people he met, in what amounts to a group meeting at the Vatican Embassy in Washington. There was a deliberate and diabolic effort to undo the goodwill engendered by the Pope’s positions on Climate Change, poverty, and income inequality.

Kim Davis’ lawyer, Mat Staver who founded the anti-gay organization, Liberty Counsel, orchestrated the Davis encounter with the aid of anti-gay Archbishop Carlo Viganó, the Vatican envoy to the United States. There is now a 34,000 strong petition to remove him from his position because of his roll in this embarrassing setup.

There are many Catholics, recovering Catholics and non-Catholics who oppose many the Church’s current policies and past actions—from not ordaining women, to the way the sexual abuse scandals have been mishandled over the years, to policies pertaining to the LGBT community. These legitimate issues aren’t the only or the whole story, however.

In 2009 Chimamanda Ngozi Adiche, the brilliant Nigerian author of Half of a Yellow Sun and Americanah gave a powerful TED talk, “The Danger of a Single Story.” Here she points out just how “impressionable and vulnerable we are in the face of a story.”

Initially in her talk she discusses the single stories most whites and Westerners have about Africa and Africans. She then goes on about going to Mexico for the first time. All she’d ever heard about during her time in the United States were stories about immigrants from Mexico sneaking across the border, fleecing the health care system, being arrested.

After walking around Guadalajara she said, “I realized that I had been so immersed in the media coverage of Mexicans that they had become one thing in my mind, the abject immigrant. I had bought into the single story of Mexicans and I could not have been more ashamed of myself.

The initial story of the “secret meeting,” albeit reported by reputable news agencies, was just that—a story.

There were virtually no facts, but that didn’t stop the frenzy of negativity.

So here’s the thing, even when we have strong opinions about issues, we must be vigilant to not appear as rabied, one-sided and vitriolic as the people we oppose. In other words, don’t behave like the right wing, non-fact checking, FAUX News watching, people you distain. There is a huge, problem with jumping to conclusions and believing what you want to believe because it serves your agenda, or out of plain ignorance.

The Question I have for Kim Davis.

Why I Support Pope Francis as the Face of New Catholicism.