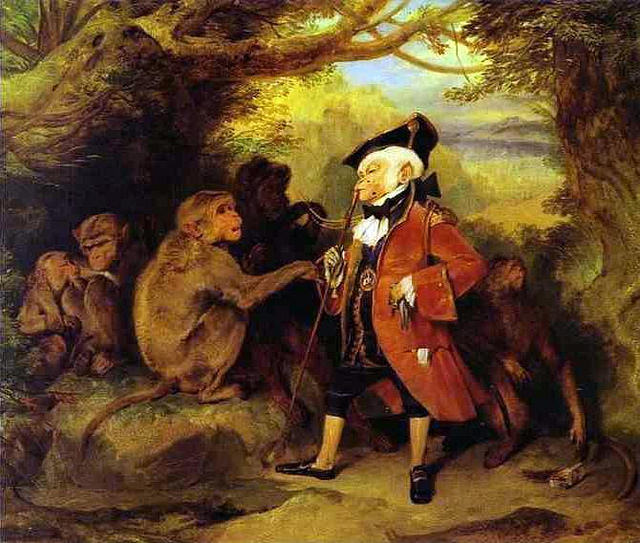 It has been said anyone can write a few lines of Shakespeare if they give themselves time, but a million monkeys typing random keys might more quickly produce a masterpiece.

Still, a lucid mind intent on solutions can be millions of times more productive than the best of laborers; one good mind can bring down an empire, after all. Climate change still awaits its Edison, the Palestinians their Napoleon or Gandhi. If we want to change anything we need to achieve some optimum between hard work, brilliant ideas, and emergent solutions.

The million monkeys might think if they keep at it long enough they will produce a Hamlet, but mathematicians are skeptical. And why waste your time with such random action when there is always some hidden Shakespeare, with his masterpiece manuscript, waiting in the wings? Whether it be ending the occupation or solving climate change, we tend to overlook genius in favor of fervent action. All too much activism is a typing away at random keys while brilliant solutions gather dust.

But there is a randomness to beauty and a sense of the accidental that hangs about our accomplishments: many solutions to the world’s biggest challenges will emerge unexpectedly and from below, as if from the twitching fingers of primates. The mind blows answers to the wind and waits for a reply, spits out solutions to the crap wheel of life.

A keen mind relaxes until the moment of action, finding the still point around which all things turn. Most activism, on the other hand, is sheer force of numbers. Most of us prefer blunt tools, rushing like Neanderthals, as the prey runs free. It is a good way to go extinct. Better to train the mind to spot quality and then wait for the quarry.

There are those who heap upon the scales of justice whatever junk they can find. But a mile of abuses do not outweigh the brilliant inch of a good argument. When monkeys argue for justice they tend to mix everything up. It is not enough to say you have been abused, not enough to prove it in court. If you want to argue for cosmic justice, best to find a Socrates, who can turn his opponents inside out.

But the problem with a Socrates is he might just as easily turn his arguments against his benefactors. If we would but make of our philosophers activist-kings, and make of our kings and activists philosophers, the world would be a better place indeed. But philosophers and activists have never mixed well. Philosophers want to step so far back that they can see what is really going on and act accordingly; activists mistrust those who are unwilling to stare straight in the face of injustice and act, though. The power of denial is simply too great for them to trust detached reason.

Activists expect cosmic justice, but there is no cosmic justice on earth—the scales do not even come close. Thieves are praised precisely for what they have stolen, the devious win power through their deceptions. Even when we try for justice there is a tendency to overshoot the mark, answering one ethnic cleansing with another. As Gandhi has said, an eye for an eye makes the whole world blind.

The basis of war lies in the belief that the justice claims of your own team need not be weighed against those of the other. Yet we can always find something for which to blame our enemies—this is why we have courts. But activists seldom have time to hear their opponents. We all have claims to justice, because everyone has been wronged by somebody, but to see that we need to see further.

Archimedes said he could move the world if he but had a lever long enough. Yet, problems get hazier the further we step back. Reason is its own act of faith, and the problem with faith is you do not know where it will land you. Consider the Christian Minister near my city, caught wandering around town with nothing on in the middle of the night—just another naked ape in conversation with the divine. But in America that makes you a sex offender. Follow truth where it leads and you will always run substantial risks. And yet, if you fail to follow truth, there is little reason to take your word for anything, for there is always a danger one yet undiscovered argument will bring your whole edifice crashing down.

There is simply no way to measure the outcome of thinking deeply versus acting with vigor. Letting us each go the way of our own dispositions is no solution either: most of us are drawn to what is easy, but facing injustices is seldom enjoyable.

If only we were better organized we would have the numbers to challenge injustice, all the little fish making one really big fish to swallow the big bully fish whole. But good organizers tend to make a hash of things before moving on to the next project. Even Martin Luther King Jr. left behind a string of disasters, as he moved from one project to the next.

Perhaps if there is a God, he is no different, creating world after world, with each doomed to self-destruct. Or maybe he is just waiting for seven billion primates to type out an answer worthy of Shakespeare. Someday we might get it right: much more likely we have passed by the answer a thousand times but never seen the jewel lying in the mud.

There is a distance from which all things come into focus. There is a space in which theory and practice fuse and wise and effective action unfolds. When activists fail to seek it, they overshoot the mark; when philosophers fail to dive in, they die of thirst. One thing is for sure: if you do not understand these words, you are missing some of the most important things in life. But understanding such things can take a lifetime.

Stand in a Circle & Shoot.