The Truth about Marriage that Nobody Tells Us. 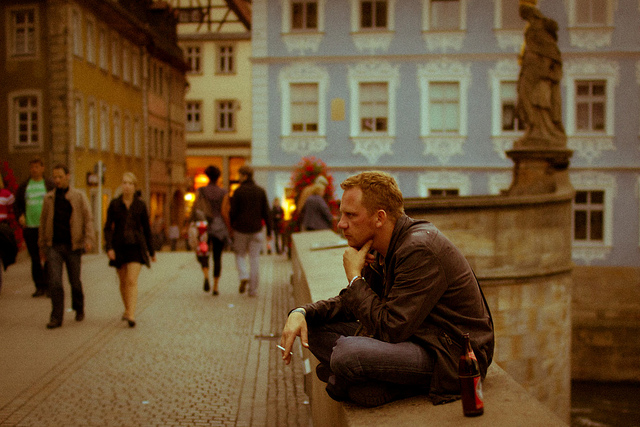 Growing up like every young girl, I dreamt of my wedding day.

I never thought much about actually being married and what that might look like, but the wedding… I had that all mapped out.

When I was in my mid-late 20s, it seemed that all of my friends had found their dream man. I was a bridesmaid in five weddings in one year alone, and attended another three the following year.

I took copious notes on what I liked at my friends weddings that I’d do at my own, what I didn’t like that I absolutely would not allow at my own wedding…and then I’d brainstorm fabulously creative things to make my wedding stand out from all the rest.

My wedding was pretty fabulous, I must say.

And I certainly didn’t think my marriage would be anything less than perfect or anything short of forever, because I grew up Catholic and Italian. And those people never get divorced.

I was pretty realistic about marriage thanks to my parents. They taught my siblings and I that it was a huge commitment not to be rushed into.

They showed us that it wasn’t all sunshine and roses…that some years there would be a lot of bickering and tough times, but you sucked it up and made the best of it because that’s what a strong marriage is about.

They were big on loyalty and trust. They showed us that there were a ton of sacrifices to be made once you had a family.

Marriage is not for the faint of heart.

So when I got married, although I had moments where I felt, “Is this it?” or “OMG…is he ever going to change this behavior?” or even “Wow, I long for the days where we were all over each other and had sex four times a day!” I certainly didn’t expect it to be any different.

Part of being with someone every single day of your life is accepting reality. We have long standing friendships that last 30 to 40 years or longer and those friendships go through just as many ups and downs as a marriage.

Sometimes we grow apart from our friends for a period of time but then come back together. Sometimes we don’t see eye to eye and we fight. Sometimes we just get sick of each other and need a little space.

But most friendships survive these peaks and valleys. It’s something we expect from friendships and still, they withstand the test of time.

The interesting thing is that we somehow expect complete and total snychronicity with our marital partner at all times when we don’t have this with any other person in our life.

We expect our partners to be the “go to” person for every issue that arises and deliver whatever we need in the moment.

We expect them to anticipate our every thought and need without having to express it; we often expect them to fulfill every sexual fantasy and desire we have and never turn us down.

We have this unrealistic expectation that every day we’ll walk in the door, look at our partner and think, “This is perfect! My life is complete and total bliss having this person in my life. I’m 100 percent complete now that we’re together.”

If you have a good marriage, it’s like this the majority of the time. But you have to work at it for the rest.

I like to think of marriage like a plant. It requires alot of nurturing and tending to. Sometimes the leaves wilt and we consider giving up on it, thinking it’s looking a bit wilted or about to die, but with a little extra nurturing, attention and TLC, it comes back to life and sometimes even sprouts new blooms.

I feel like we give up too easily. When the going gets tough, we bail. Divorce has become so acceptable nowadays, that once we have to work at it, we feel that it’s okay to say, “It’s not working. I can’t stay in this anymore.”

Or a shiny new person enters the picture. One we don’t live with, share a bathroom with, argue over finances with, have to tend to when they’re sick or take care of children with—someone we’re not with 24 hours a day, therefore never giving us a chance to grow bored with them.

So we want to discard the old and move onto the “new” because the “new” is so much better than what we had.

The truth about marriage: every object loses its luster, its mysteriousness, its newness after a period of time. But how much do we value it? Are we willing to live through the days, weeks, and months where we don’t see the beauty and uniqueness of that object the way we did when we first purchased it?

Because the truth about marriage is—this is reality. It’s a beautiful, soulful, connective, profound union between two individuals. And although it may not always be sunshine and roses, it’s a union worth fighting for. It’s a union worth not giving up on.

It’s worth maybe having some faith that you will find your way back to each other like two friends who have grown apart, given up on each other for a period of time…but who remember why they were ever friends to begin with.

Why Everyone Should Get Divorced Before Marriage.