Using Astrocartography to Determine the Best Place to Live. 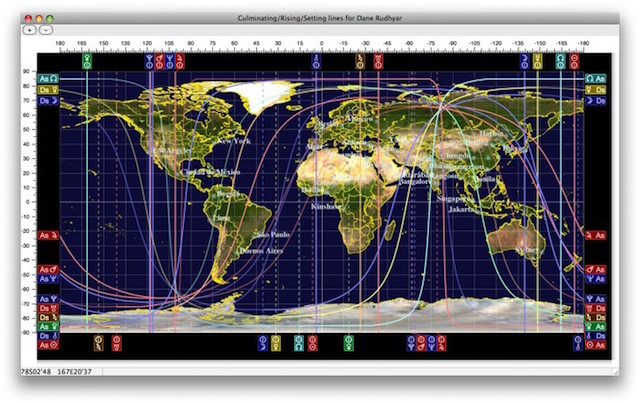 Astrocartography can be used to help people find the best places to live, work and find love in the world.

Astrocartography is one of several methods of locational astrology, which claims to identify varying life conditions through differences in location.

It is great for the astro buff or anyone curious about where they are living and how they can use the energy of locations to their advantage or just know why there is little or no hope, beating the same drum trying to make stuff happen. It also provides some entertainment.

A relocated natal chart is used according to your location. It is placed over an astro map or Astro”Carto”Graphy. It is basically your astrology chart imprinted over the world map.

It is believed that the influence of these lines attribute to different experiences, or luck, in different locations, depending on which lines are influencing a specific place. For example living somewhere under a Sun line or Jupiter line is considered lucky and living under a Saturn or Pluto line can bring on difficulties or challenges.

I have an interesting life, sometimes painful, sometimes experimental and sometimes lucky.

I have found over the past 20 years of traveling and living in new places, that there are just some places that resonate with me more than others and after some resistance to using astro maps, I succumbed to it and finally found a place I now call home.

I have always been restless, a daughter of a Marine Engineer, and named after a hurricane that sank the ship my father had been working on, in the Caribbean. I have been on an endless search for somewhere that really felt right on a inner level, outer level and practical level. A place where I could feel like I have finally arrived without having to actually transition to the other side. I know it may sound dramatic but it has been mentally and physically exhausting changing countries and cities 10 times from 2010-2015.

In April 2010, I was living in Sydney, Australia and after purchasing a nice apartment in an “up and coming” neighborhood I found myself pacing my flat on a daily or weekly basis. I was so bored, I needed a “change of air” as the Lebanese saying goes.

I love reading the Turkish coffee cup (reading coffee grounds) and after seeing an image of a camel in my cup reading I decided to go to Dubai.

Like many, I had always been very curious about Dubai, so I thought: what do I have to lose?

Thanks to the internet and social media I had scheduled clients to meet soon after arriving. I worked solidly from April to June and then realized how awfully hot Dubai can be in the summer and wanted to go somewhere a little cooler and more liberal. I had friends who lived in Beirut, so I decided to take a trip to Beirut in June and ended staying there for two years.

All of this moving was unsettling, so I decided to use the astro maps to help me determine the best location for me.

I relocated my birth chart to the place of my current location and then looked at the astro maps, which cover that chart and saw how it correlated with the houses and signs in my relocated chart.

In Sydney I have the astro map lines of Neptune and Venus for my relocated chart—not too far off the East Coast and going down towards Melbourne. Neptune is in my 6th House and Venus in my 3rd, so for me Sydney was all about work, short trips and the media. Lots of work but not much fun.

In Dubai, I have the astro map lines of the Moon and Venus and with these planets falling in the 7th house. I found that I worked with a lot of women which is both the Moon and Venus and that there was a sense of instability with the fluctuating moon but Venus will bring in money. Like everything in Dubai for me was influenced by the shifting sands of the desert.

I also channelled and created my Love Oracle Deck of cards in one day and worked on that project while I was in Lebanon. Relationships were better and exciting but the internet in Lebanon was painfully slow—I wasn’t able to maintain my online business due to power cuts and slow servers. It came to a point where I had to go, so I went back to Dubai until I was granted my U.S. residency.

Off on another adventure I landed in Los Angeles in 2013 thinking it was the best bet for Television and the launch of my Oracle Deck. I hadn’t checked my astro cartography and after seven months of going about by business and experiencing setbacks, mainly of financial nature, I has some astrologers look at my chart!

After seeing that I had Pluto in my relocated 1st House sweeping right down through California I understood exactly what was going on. Oh yuck! Pluto wasn’t doing me any favors or providing amazing lessons. I just had a bunch of debt (Pluto rules banks and debt) so I decided to go back to Sydney to re-group.

After re-grouping, I went back to Dubai and then had the sense to consult my chart again, after feeling settled once again. I would think I would have learned this lesson by now. Oh my.

According to my astrocartography, the best place for me to live in the U.S. is Miami, featuring a lovely Jupiter, Sun and Mercury on the Midheaven or 10th House Cusp and a North Node in the 7th House.

So, I decided to take a leap of faith with the astro cartography very much tried and tested under my belt.

I have never been more happy than living just north of Miami on the beach. I could have saved a lot of time and energy by coming here to begin with, but sometimes it is a situation of divine timing or trial and error.

In the short time I have been in South Florida I have been able to connect with what I call a vortex of energy off the coast going into the Bahamian Islands. I will be hosting events with some like minded soul family members who I have connected with since being here. I have also shot a number of amazing videos and am working on a documentary. Things just keep coming together and I pinch myself everyday. I feel truly guided and connected to my spirit guides and often get crystal clear messages that come through re-confirming everything.

If you are an astrology buff, I highly recommend you check out your astro cartography to give you some sort of divine intervention or scientific guidance in understanding your locations and what they can offer you.

It has worked for me!

Meanings of Houses in the natal chart, planetary lines and the north node:

Sun—general ease, feeling of wellbeing, in your own element, on stage.
Moon—instability, unbalanced, constantly fluxing and changing, associations with women.
Mercury—good for writing, teaching and sales, mercurial pursuits are favored.
Venus—good for love interests, money, beauty and harmony.
Jupiter—where things fall into place easily and effortlessly. Where opportunities are more abundant.
Neptune—illusions and disillusions or looking at the world through rose colored glasses. Can be good for spiritual pursuits or where depression may be highlighted.
Pluto—transformation, debts and isolation.
North Node—Is where you are going in this lifetime.

Wherever you’re supposed to live, here’s how to bike every day: 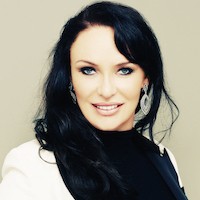