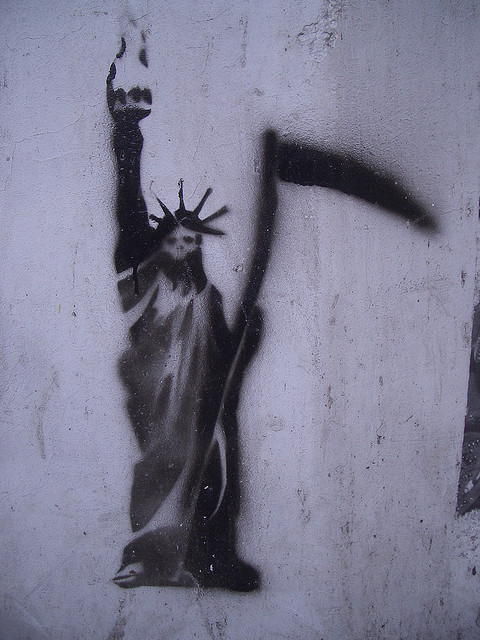 I cried hard. I cried real tears from a place I don’t willingly visit in my daily life.

Tears flowed like wild horses let loose from a corral, running rampant over fields of their own choosing.

I’ve reflected on the images of 142 dead college kids in Africa killed by terrorists earlier this year, provided by social media as a method of exposing our seemingly subconscious bias. I barely remember hearing about this travesty, let alone seeing the outpouring of support for those so horribly effected by this event. I read how those victims were shot and hacked to death for doing nothing except becoming educated. They were killed by a group that rivals ISIS in their brutality and in numbers.

I cried openly for them as I felt the fear of voiceless, nameless victims who would not find retribution on behalf of a world superpower who likes to act like we care.

There would be no vows to eliminate Boko Haram and no symbolic gestures to suggest we care at all about those who really have no voice of their own on the world stage.

Then there were the images of carnage and death in Beirut. There, tales of heroism personified by Adel Tormous, a man who tackled one of the suicide bombers in an attempt to stop him, dying in the process. There were stories of children who died, of innocence lost in a moment of extreme violence. I couldn’t remember seeing any media coverage on this, or any mention of the names of the victims or an outpouring of support over social media.

“When my people died, no country bothered to light up its landmarks in the colors of their flag,” Elie Fares, a Lebanese doctor, wrote on his blog. “When my people died, they did not send the world into mourning. Their death was but an irrelevant fleck along the international news cycle, something that happens in those parts of the world.” ~ Elie Fares via The New York Times.

In the diatribe of prejudiced discussion, there have been countless examples of finger pointing at Muslims as the cause of this mayhem. Yet, I don’t see the recognition that Muslims are paying the heaviest price for the formation of ISIS. There is little mention in this callous and biased distortion of the truth that Muslims are being systematically killed by ISIS, and that ISIS has killed far more Muslims than they have any other religious group. Muslims are fighting, and dying, for an ideal far greater than religious extremism.

Today, I’ve been branded as anti-American by some because I’ve pointed out that Arab Muslims are one of the most historically oppressed people in history.

I’ve brought up events like the pagan atrocities against Muslims when Muhammad was alive. I’ve brought up the Crusades, the Ottoman Empire, the dissection of Arabia, and the Zionist movement as the origin of modern-day terrorism in the Middle East. I’ve brought up a Western foreign policy that installed and maintained tyrannical and oppressive forms of government in the region, and I’ve brought up the displacement of an entire people from their homeland in order to create a new country.

Apparently, stating these facts makes me un-American. Knowing them just may make me a pariah in discussions that toe the party line, whichever party that may be.

I cried today in the stark realization that our media is complicit with terrorism. It’s constant replay of acts of terror is nothing more than ISIS propaganda authorized, in my opinion, in order to create an undercurrent suitable for war and for a further erosion of our civil liberties. I once commented to a conservative friend, “If you are saying that al-Qaeda hates us because we are free, then the Patriot Act and NSA should eliminate that hatred or, at least, show them that their tactics are working.” Now, we are being told that France is too free, and that their brand of freedom is one of the causes of these terrorist acts.

I guess I’m just not sure if I understand this society anymore. It seems that the Statue of Liberty is no longer breaking those shackles strapped to her ankles, she’s donning them.

She’s no longer using her arms to welcome the tired and the hungry. She’s using them to build walls designed to keep them out.

In a nation that says it’s too poor to fix its roads and bridges, building walls is affordable. In a nation that can’t afford to provide health care to its people, to provide a livable wage for the working poor, or a usable education to its people, it can find money to invade nations, build ill-performing weapons systems and spend more than the civilized world on its military.

In this society, that same Statue of Liberty would be subject to stop-and-frisk, and likely have that wonderful tablet she is holding searched without a warrant if she were real.

Ironically, the French offered her to us as a gift of friendship from the people of France to celebrate our dedication to freedom and democracy, and now some of us are telling the French that they are too free for their own good.

The average Parisians response? Well, when their government told them to be very afraid and stay indoors, they thumbed their nose at the idea and went outside. To be free. To suggest to those who were trying to instill fear in them (both the terrorists and their own government) that we will not be slaves to fear.

In Africa, there are boys and girls who still go to school despite the terror of Boko Haram. In Beirut, boys and girls still play outside despite their being targeted. In Iraq, policemen still show up to work and children still play among the rubble left by American invaders. In Syria, in Egypt and in Turkey, Muslims are dying at the hands of terrorists without much fanfare from the West.

No, it is just too easy to spew anti-Muslim hatred when terrorism rears its ugly head rather than understand just how much the vast majority of Muslims are sacrificing to fight it.

I’m realizing that interspersed with these tears of sadness are tears of frustration.

So, ignore me if you will. Unfriend me if you must. Block me if I offend your sensibilities. But I won’t be silent.

I am an American. I won’t shut up because you think your profile-picture-turned-flag is actually doing something. I won’t shut up because you preach peace in your church while seeking to oppress my brothers and sisters. I won’t be quiet while the party who brought us Reagan’s “Mr. Gorbachev, tear down this wall” becomes the party seeking to build a much longer one. I won’t pat you on the back for your “prayers for Paris” while innocent children are slaughtered in Africa with nary a peep out of you.

No. It’s time we wake up. It’s time that these tears become the cold water that wakes us from our slumber. While we can’t stop idiots from being idiots, we can stop giving them a soap box on which to stand. We can stop believing everything on CNN, MSNBC and Fox News just because they agree with our political ideology. We can start thinking on our own, and we can start living the prayer instead of saying it.