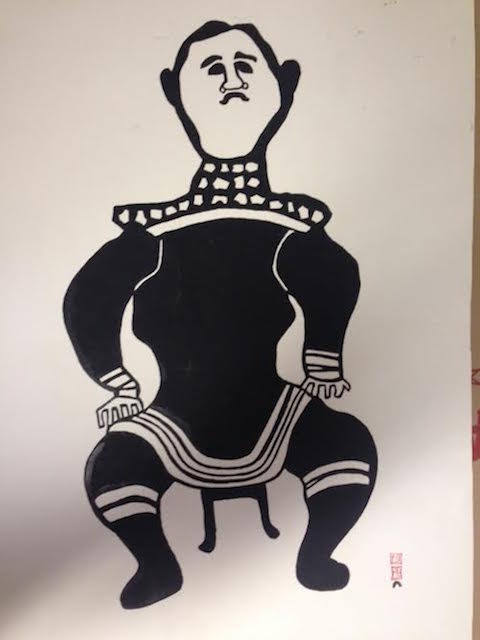 My mother and father were collectors.

All of these precious items lived in my mother’s basement after they separated when I was six.

She held onto them the way one holds onto the past—in trunks and boxes that, upon a glance, overwhelm you.

She’d walk down to the basement with the intention of sorting them, selling them, releasing them, letting it all go.

And then she’d walk straight back up the stairs again and close the door behind her.

There were only a few dear items that she courageously removed from the basement, had restored and stored with caution.

These were the Inuit prints.

They lived in the third floor closet, carefully placed between acid free paper and cardboard stock.

When she learned that life was nearing its end for her, Mom called my sister and I together and told us to choose the ones we wanted.

We could each choose two. The rest would be auctioned.

And so we did.

One that I chose was called the Sitting Woman.

The value of these prints varied in financial terms, but after she died they took on a value far beyond financial. They became a piece of her that I would carefully frame and place in my home in D.C.

And so in September the Sitting Woman was carefully packed and shipped alongside other gifts from her, and trucked to Washington D.C.

I kept her in her packing for a long time.

I think I was scared to look at her, to be reminded of what having her with me here, outside the third floor closet, actually meant.

So there she sat, bundled away safely.

On one October afternoon, I gathered some courage.
I’ll just check that she is alright.
Ever so carefully I got the scissors out
I cut the packing tape slowly, slowly
Layer after layer
I gently lifted up the final piece of cardboard stock
Then the acid free paper
And sure enough, there she was
Looking at me as always,
With neutral and steady eyes
She was okay.

The boys were home.

I took her out of the outer cardboard package
Placing her in one smaller card stock envelope
She’ll be happier here, I thought.

It was dinner time.

The boys stayed in the same room as her, playing a jumping game.
Up the storage trunks they’d climb.
And wheee, down they’d jump
And roll
And frolic.

Distracted by dinner duty, I left them and went upstairs to cook.

I cannot remember what drew me down to her again.
What I can remember is this image of the cardboard:
Scissors laying on it.
And stabs.
Scissor stabs.
In the cardboard.

I remember flying to her, lifting the paper I’d hoped would protect her
And falling to the floor—
Scissor holes all around her beloved head.
A halo of scissor stabs.

I remember yelling something.
I don’t know what.

And a child.
A small child looking up at me.
Scared.
And then crying.
Sobbing.
“Sorry Mummy”, he kept saying.
“I’m so sorry”.

Mummy was a shaking puddle by then, held by her older boy who looked at the sobbing five-year-old with disdain.

Why? I wailed.
Why would you do that?
What were you thinking?
Who does that?
Who stabs cardboard?
I can’t ***ing believe it!
You, stupid, stupid child!

My terrorized screams went on and on,
gradually melting into desperate cries.

My Mom was gone, and her treasured gift to me ruined.

The crumpled wailing ball that I was became a grey and tearful shadow.
Rage turned into shock.
Grief took over (again).

And I dragged myself along to dinner.
Where the children and I ate.
In silence.

Over the course of that evening
My husband returned home
He bought me flowers and poured me wine
My little one apologized profusely
And hugs abounded for Mummy, poor Mummy.

Over the course of that evening
I checked time and time again to be sure
Quite sure that it hadn’t been a bad dream.
That it had really happened.

And I’d lost it.
Totally.
Completely.

I know that the Sitting Woman was not just any art print.
I know she represented the dearest friend I’d ever had.
Her pain, those stabs, I felt them.

And so when I read beautifully inspired blogs like the one about the boy who shatters the mirror when he slams the door in anger and his mother who responds lovingly, I think of that moment.

And I wish so hard that I was like that mother.

But in all truth,
In that moment,
That moment of shock,
I became the child, not the Mom.

And this, too often, is what happens when we see red.
What is happening in front of us—the facts—is not so relevant.
It is the meaning that we attribute to it that triggers us.

Some may excuse me, given my grieving status
Or the emotional roots of the story,
But ultimately it is all the same.

I repaired my relationship with my boy quickly that evening.
I held him and explained that I’d lost control.
That the print was extra special.
That it represented a special story to me.
I told him that I was wrong in my reaction.
That I loved him
That I shouldn’t have said those things.
That I’m learning, too.
And that I’m still sad a lot of the time.
That I was sorry, oh so sorry.

It was after the fact, though.
As will be any reparations I do to the beautiful Sitting Woman.
Who still sits stoic in my basement (far away from scissors)

A pretty penny will be paid to restore her and frame her.
And a new story will be told when people comment.
A little monkey boy had his way with her.
And it was remedied. 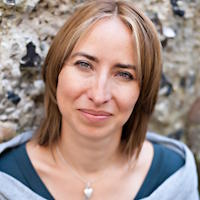