Lessons in Acceptance: Being a Motherf*cking Tree in a World of Tiny, Round Pegs. 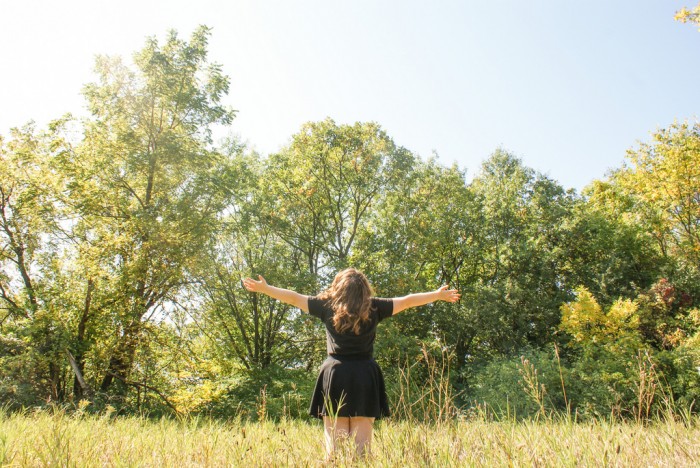 “My mission, should I choose to accept it, is to find peace with exactly who and what I am. To take pride in my thoughts, my appearance, my talents, my flaws and to stop this incessant worrying that I can’t be loved as I am.” ~ Anaïs Nin

I remember the first time I’d ever been told that I was “too much.”

I was six years old. It was the end of the first marking period of first grade, and my report card showed all high marks—except for one: talking. And the note next to it mentioned something about how “Sara raises her hand and talks too much in class. She needs to learn to give the other students a chance.”

Curious by nature, it was true that I almost constantly raised my hand to answer and ask questions, engaging in whatever discussion I could with my teacher. I had an unquenchable passion for knowledge. I thought it was a good thing.

But it wasn’t. I was too much. Even then, at six years old, I’d felt the wrath of society’s harsh hand in deciding that being too much was unacceptable and therefore discouraged. And though it may seem like a trivial remark now, that report card comment drastically shifted the lens through which I saw myself in the world.

As a result, undoubtedly exacerbated by other influences I’d soon encounter, I would spend the next 17 years making every effort to shrink—to be quieter than I wanted to be, as insignificant as possible, hiding behind whatever walls I could build, being less than I knew I could be.

It didn’t happen overnight, but this marked the beginning of a lifelong battle with myself to suppress my natural tendencies. By the time I hit adolescence and early adulthood, I had lost every part of me that mattered: my curiosity, my voice, my intelligence, my peace, my confidence and my sense of purpose. I’d shrunken to the best of my abilities, and the only thing that remained big was the magnitude of the rigorous upheavals into which I’d thrown myself over and over again in an effort to keep shrinking.

I write this now from the other side of those violent throes, but getting here was not an easy feat. It took everything I had during those 17 years not only to realize why (or at least partially why) I’d been in so much mental, emotional and even physical pain, but to completely unravel it. To commence the unpleasant and unglamorous process of un-becoming. To find peace and take pride in myself—my real, big, talented, flawed, curious, messy self.

Only on that journey of unraveling and un-becoming would I understand the damage I’d done by so diligently shrinking enough to be acceptable, by forcing this square peg into a round hole as aggressively as I could.

Except I wasn’t even a square peg. I was a tree. A whole motherf*cking tree trying to fit into a tiny round hole.

And while I’d been pretty successful with most attempts—which really meant I’d been anything but successful in the scope of my potential—every time, without fail, my stifled bigness would go up in flames as if to say, “hey b*tch, remember me? Stop putting me out.”

Eventually, I had no choice but to listen. And in order to undo what I’d done, to survive that unpleasant and unglamorous process of un-becoming, there were two things I reiterated to myself on a regular basis:

Some people don’t like big motherf*cking trees in their yards (even though they’re unarguably vital to the health of our planet). They stand in the way of an otherwise beautiful view, they shed leaves in the fall and if they’re too close, they can topple over to destroy a house.

I had to understand that being big meant that not everyone would like me. My inquisitive nature would irritate those who didn’t have the open mind for discussion, my intense passion would intimidate, deflect and ruin many potential friendships and my stubbornness meant I’d stand my ground until I fell—even if I fell into and consequently destroyed someone’s house.

But just because I wouldn’t necessarily be accepted or embraced by the masses didn’t mean I couldn’t accept or embrace myself. It didn’t mean that no one would ever accept or embrace me; it just meant I’d have to work a little harder to find those people, simply because we’re not as common in a world comprised of tiny round pegs.

I’d given every effort to masking my intuition by denying myself the right to be who I truly was, but with every effort, I was only met with forceful blows of pain as the truth of my being begged for attention. I’d been so determined to become quieter, subtler and weaker, and given my insane amount of drive, I’d always made progress in those directions. But whenever I’d get too far, undoubtedly nearing the breaking point, something bad would happen: sickness, injury, severe depression and often habitual responses of self-abuse.

I’d collapse under the weight of all the things that weren’t me, and I’d hit the ground hard.

It took a major awakening full of rerouting and and reconsidering everything that made me who I’d become—small and unsure, numb and yet sad—to declare that enough was enough. That I was ready to be the person I’d always wanted to be: my true, big, messy self.

Finally, I’ve reclaimed that potential as I slowly but surely allowed myself to be big and bold and passionate and unashamed of being the whole motherf*cking tree that I’d so fervently tried to cut down for all these years.

I did it by remembering that fateful report card comment that told me I was too much, by talking about that memory throughout my process of un-becoming—usually to myself, but sometimes with another person (which was immensely helpful).

I did it by recognizing that I am a messy and inconceivable masterpiece of all the lessons I had to learn the hard way. The lessons that I may not have learned had it not been for all the shrinking I’d tried to do and all the ways I’d hurt myself in my efforts.

I did it by choosing to accept the mission of accepting myself—my real, big, talented, flawed, curious, messy self—and here I am. The whole motherf*cking tree with sights set on the open sky instead of some hole meant for a tiny round peg.

Are You Being Authentic? 4 Ways Your Body Knows.