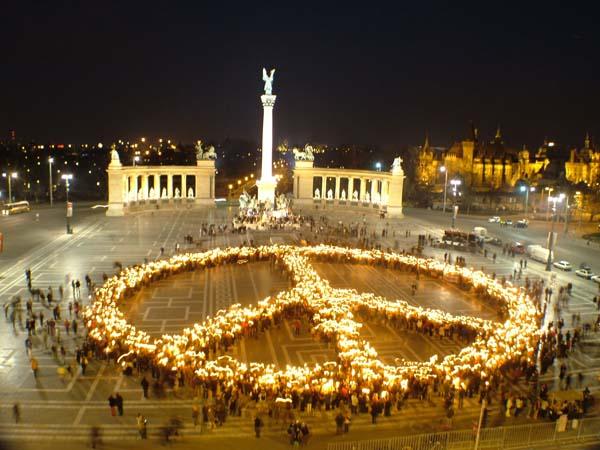 After the Roman Empire fell, the Catholic Church came to govern almost its exact reach, through a religious hierarchy eerily reminiscent of the Roman military.

As barbarian invaders entered China from the steppes of Asia, they repeatedly found themselves governing a great civilization, and the Confucian bureaucracy, with its finely reasoned system of ethics, its meritocratic exams, and its well-trained officials, was ready-at-hand to help them govern. Even as Confucian officials resisted alien rule, the Confucian system of ethics sustained Chinese civilization through its maintenance of state norms and institutions. Each of the world’s great religions has held together a people as the states of which those people were a part came and went.

Religions may shape our identities more than states because they are able to affect us so much more deeply. Spiritual experiences, embodied in ritualized life transitions, bind us together symbolically and experientially. In the most powerful spiritual experiences, the world of discreet objects, along with one’s sense of self, appears to melt, and inside and outside, self and other, are experienced as one great whirling ocean. Returning from this experience to everyday consciousness, there tends to be a greater sense of connection and purpose. And it is through this sense of connection that religion brings us together.

But less powerful experiences can also be transformational. To surrender into union with others in music and prayer, or to contemplate the deeper purpose animating our lives, can put wind in our sails and make our lives more full. The co-religionists with whom we share these momentous occasions come to appear as the people who matter most in our lives. Religious rituals indoctrinate us into a shared set of values and beliefs and they organize communities through shared services and community activities. All of this brings us together.

Religion more generally integrates non-conventional consciousness. The religious sociologist, Peter Berger, draws a distinction in his now classic Sacred Canopy between the sort of everyday waking experience through which we conduct our day-to-day affairs and the more extraordinary experiences of birth, death, dreaming, derangement, sickness, and social displacement. He points out that these nonconventional experiences are actually quite common and if they are not somehow integrated, they are the joints around which self and society may come unhinged. According to Berger, these states are a problem for which religion is the solution. Religion integrates our personal lives into the wider social body by weaving our most unconventional experiences back into a shared system of values and meaning.

Perhaps it is for this reason that whenever peoples have been thrown together, through war, migration, travel, or trade, religion has provided a shared sense of identity and meaning. States can more easily govern when their citizens share a common identity. But alienated individuals also crave the binding power of shared religious rituals and experiences.

Religion has laid the grooves for many a civilization, providing a basis for peace and social harmony. It casts wide the net of group identity to include rival polities and societies, deepening the bonds of empathy, and strengthening cooperative institutions. And like little else, religion orients the gaze toward the totality of all things. Religion can bring us together by bringing in everything.

While many of us still cling to a common sense of humanity based on a shared religious tradition, the foundations are crumbling as the ground moves under our feet. The universal literacy that has been fostered in not just in the developed or even the developing world, but also often in failed states, means a higher proportion of humanity than ever before has acquired the ability to question religious authority. Education has a way of turning power structures upside down, for it shows us that things might be otherwise. We thereby come to scrutinize the values and norms, rules and creeds, into which we have been conditioned. And such questioning can pull the rug out from under what might be an otherwise vital religious tradition.

The growth in what we know springs not just from literary but also from technological sources. Through the Internet we are exposed to groups about whose existence we would otherwise be unaware. The barriers to entering new groups are lowered along with the barriers to leaving our own. Easy in, easy out, means less dedication and looser bonds, and this bodes ill for religion as well. Meanwhile, the groups with whom we are closest are increasingly exposed for their transgressions. Just yesterday, the Mormons were the rising religious faith in America, but as devout Mormons check the claims of church elders against information they find on the web, they are discovering their founder to be a polygamist and likely charlatan. And for many their faith is slipping away. Something similar is happening in mainline Protestant sects, where ministers and parishioners alike are exposed the non-canonical texts and the history of early Christian movements. This is shaking the whole conception of Christianity to the core.

Such revelations could be multiplied across sects the world over. They are the result of increasing literacy, travel, trade, and media reach. And while they make it ever-more difficult to establish religious authorities that are immune to question, there is little uniformity in the response to this challenge. If the world’s great religions are to continue doing what they have long done best, they must break free the bonds that once bound their peoples together and establish a firmer foundation upon which humanity itself might be united. For religion to survive it must thus go under. If it is to last it must recreate its very function.

Perhaps only those who have touched to the very core of the function of religion can even contemplate what this might look like. But it would be a mistake to assume religion can get by on some stripped down mystical essence. Religion has always been a communal activity. But if it is to matter in the new millennium, its flock must now become the world. We would all do well to think a little more about how religion might unite humanity and how humanity might make better use of religion. Whatever we find, it will not be what we expect. But such has always been the case with new religions. It is time to make the world anew.

This is an excerpt from Convergence: The Globalization of Mind.

The Strange Death & Rebirth of God.