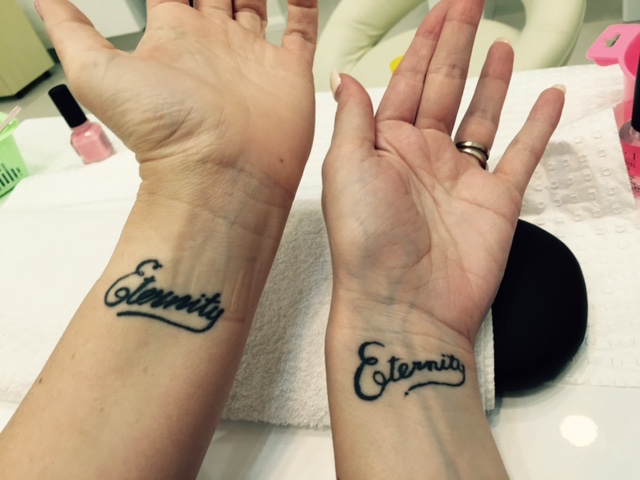 Today I was at a nail salon having my nails painted. I don’t always get my nails done professionally, and I’ve only been to this particular salon once before.

Now, it’s not a run of the mill tattoo—a heart or an arrow or a rose—it’s the word “eternity,” written in script, as depicted by Arthur Stace on the streets of Sydney from 1932 to his death in 1961.

Stace was an eccentric, a reformed alcoholic and a former soldier. He became known as Mr. Eternity, because he would leave his house at five a.m. every morning to find places to write his iconic copperplate script “Eternity” across Sydney. When caught by police, he would respond that he had permission from a higher source.

Stace became a local legend, and in 2000, the year of the Olympics, Sydney honored Stace by emblazoning his word across the Harbour Bridge: Eternity.

The thing a lot of people don’t know about Stace is that he was illiterate. But somehow the word called him; it was his dharma to spend fifty years spreading this word across the streets of Sydney.

The word “Eternity” comes from the passage, The Echoes of Eternity in Isaiah 57:15:

“For thus saith the high and lofty One that inhabiteth Eternity, whose name is Holy; I dwell in the high and holy place, with him also that is of a contrite and humble spirit, to revive the spirit of the humble, and to revive the heart of the contrite ones.”

A few years ago, I tattooed it on the inside of my wrist. For some reason, the word—the simple look of it, the notion that a man spent his life scrawling this in chalk on Sydney streets—moved me.

Moved me. Goose bumps. That sense that someone is walking on your grave. That’s what I experience when I see that single word. As a writer, I find the power of words to change someone’s very being utterly amazing.

And here, sitting next to me in the nail salon, was a woman who had been moved in the same way and had this word tattooed in the same place on her skin. We struck up a conversation, and discovered that both of us only had the one tattoo: Eternity.

What does that mean? Is it some sort of arcane sign provided by the universe?

Some of us try so hard to attribute signs to the ordinary, from a feather found on our path, to numbers that seemingly appear constantly, to words. These people would argue that these signs show us the way—our divine path. They’re messages from the universe, from a greater power.

In the Spontaneous Fulfillment of Desire (2003), Deepak Chopra writes about “coincidences” that befall us:

“Can such moments be ascribed to mere coincidence? Of course they can, but on closer examination they can also prove to be glimpses of the miraculous. Each time we have an experience like these, we can choose to dismiss it as a random occurrence in a chaotic world, or we can recognize it for the potentially life-altering event it may prove to be. I do not believe in meaningless coincidences. I believe every coincidence is a message, a clue about a particular facet of our lives that requires our attention.”

He goes on to define “synchrodestiny”:

“When you live your life with an appreciation of coincidences and their meanings, you connect with the underlying field of infinite possibilities. This is when the magic begins. This is a state I call synchrodestiny, in which it becomes possible to achieve the spontaneous fulfillment of our every desire. Synchrodestiny requires gaining access to a place deep within yourself, while at the same time awakening to the intricate dance of coincidences out in the physical world. It requires understanding the profound nature of things, recognizing the wellspring of intelligence that endlessly creates our universe, and yet having the intention to pursue specific opportunities for change as they appear.”

Chaos theory tells us that small differences in initial conditions can have a profound effect, or a “butterfly effect,” as coined by Edward Lorenz in his paper. Even though systems are deterministic (their future behavior is determined by their conditions and no random elements involved) their outcome is not predictable. So chaos will reign even if predetermined ingredients are used.

But is it really chaos?

When my fellow Eternity-wearer left the salon, she turned and said to me,

“Wouldn’t it be funny if we ran into each other ten years from now, and our second tattoo was the same and in the very same place?”

Indeed, I thought, funny and strange and inexplicable. And certainly if that happened, I would need to hush my speculation and admit that this is more than a coincidence, and most definitely a sign.

Are they what we make of them? Or are they messages from a greater power?

If this were a sign, and we were to follow Deepak Chopra’s article, I was meant to write this article; for unforeseen, unknown reasons, it’s my synchrodestiny to do so. Even if we were to ascribe to chaos theory, this small change could have a “butterfly effect” in the future.

So on this occasion, I’ve followed my synchrodestiny, and will wait to see where it leads me.

A Conversation with Dr. Deepak Chopra