The War on Terror is far from Over: Afghanistan Plagued by Killings. 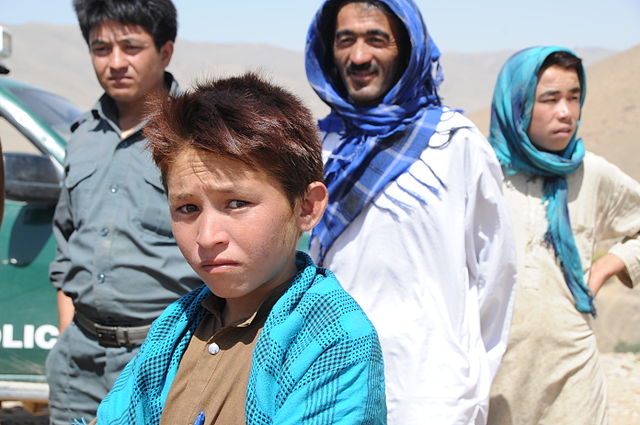 Protesters gathered Tuesday to hold vigils and light candles for the victims of the latest slaughter of innocents in Afghanistan.

Imagine for a moment that anyone we knew who decided to move away from their childhood organized religion, or familial religious beliefs, could be labeled as an apostate and brutally slaughtered. Even if, say, that change was just from Catholic to Baptist.

Imagine that we are both Christians, yet I must kill you because you are of Asian descent and chose Baptist and I am Caucasian and Catholic. In America, we barely give thought or notice to these little details because here they don’t matter to most people—things like this are as insignificant as a gnat for most of us.

For the Hazara people though, this slight detail of ethnic descent may mark them for death. The most recent killing of seven hostages has thousands protesting the violence. The victims, who had been held prisoner for months according to the families of the victims, included three women and two children. The taking of hostages across the country has become a serious issue in recent months, a spokesman for Afghan President Ashraf Ghani stated.

This is what is occurring in Afghanistan as we speak and has been for decades. The most recent victims were kidnapped and had their throats slit in Zabul Province.

Officials are blaming the killings on the Islamic State (ISIS/IS).

The Hazara people have lived in fear of being kidnapped and brutally murdered just for being who they are, and now these fears of sectarian violence are rising higher than ever before. The Hazara are one of the few groups that have prospered since the American led overthrow of the Taliban, and they escaped much pf the warfare that has swamped Afghanistan since the toppling of the Taliban.

Just quickly, I would like to offer some definitions for context. If you are anything like me, you may have a hard time keeping up with who is who, and whom hates who in the Middle East. I don’t say this to sound callous, but I have been trying to gain an understanding of Islamic sects and ethnic minorities for nearly a decade now and it is a very complex place to understand.

Founded in the 7th Century by the Prophet Mohammed. He founded the first Islamic State in Medina in 622 A.D. SO Mohammed is to Islam what Jesus is to Christianity. After Mohammed, came four caliphs who led Islam. The 4th was Ali.

The Shiite denomination of Islam believe that only the heirs of the 4th caliph, Ali, are legitimate successors of Mohammed as leaders of Islam. Second largest branch of Islam. Believe that the Mahdi, “the rightly-guided one” whose role is to bring a just global caliphate into being, has already been here and will return from hiding. (Second coming?)

Largest denomination of Islam. Believe that the first four caliphs after Mohammed took his place rightfully as successor to Islam. Sunnis thus believe that all heirs of the four caliphs are legitimate religious leaders. They believe in regards to the Madhi that he has yet to come and emerge from history.

Persian speaking people of central Afghanistan, Hazara Town in Balochistan, Pakistan and Karachi. They are overwhelmingly Twelver Shia Muslims and make up the third largest ethnic group in Afghanistan. They are descended from the Mongols, and largely viewed as outsiders. Not only are the Hazaras predominantly Shiites, they are ethnic immigrants, so to speak, and were originally Buddhist upon their arrival 800 years ago. When they converted they largely chose Shia Islam, which is viewed as the same heresy as we saw in the 1500’s between Catholics and Protestants.

Twelver is the largest branch of Shia (Shiite) Islam. They follow their chosen 12 Imams as the political and religious successors of the Prophet Mohammed.

Apostasy (“a defection or revolt”)

The formal disaffiliation from, or abandonment or renunciation of a religion by a person. It can also be defined within the broader context of embracing an opinion contrary to one’s previous beliefs. One who commits apostasy is an ‘apostate’.

In a 2014 Professor Cole, a noted Middle East historian stated that”Shiites are more like traditional Catholics in venerating members of the holy family and attending at their shrines. Contemporary Salafi Sunni Islam is more like the militant brand of Protestantism of the late 1500s that denounced intermediaries between God and the individual and actually attacked and destroyed shrines to saints and other holy figures, where pleas for intercession were made.”

The Taliban view the Hazara people as apostates. They’re fundamentalist militant Sunnis—Islam’s modern day Templars, if you will. It’s their way or no way. They were removed from power after the American invasion, and are fighting to regain control of Afghanistan.

The Taliban carry political and religious reasons for hating the Hazaras, dating back to the Russian involvement in Afghanistan in the 1970’s and who sided against whom in that mess. (The Hazaras sided with the Soviets, and we backed and armed the Taliban to fight against the Soviets). So, the hard-line Taliban have viewed the Hazara people as the enemy for decades. In 1998 the Taliban went on a three day murder spree slaughtering 2000 Hazaras.

In 2001 the Taliban destroyed the great Bamiyan Buddhas that had been etched into the cliff face by the Hazara 600 years ago. They have been oppressing them for years. While that was a sad loss of historical beauty, sadder still is the loss of life that continues to take place for these oppressed and victimized people.

So essentially, it seems they are fighting themselves.

It’s hard to say who could be responsible for the ethnic/sectarian kidnappings and killings that are again on the rise against the Hazara people. Have the militant fundamentalist members of the Taliban deserted the ranks to join ISIS, leaving the ethnic minorities safe under the Taliban rule? Or are The Taliban still practicing this form of sectarian violence and terror under the guise of being able to blame ISIS? Is this new method of brutal killing a new tactic for a new Taliban that is trying to match ISIS in brutality?

Typically beheading was not a tactic used by the Taliban. Yet this year, the rise in the number of beheadings against the Hazara victims has been on the rise. This makes me think that this is a new, more violent Taliban that has grown in response to the instability of the region and the growing ISIS threat. It just seems, that with the Taliban at war on so many fronts against Afghan forces, as well as fighting a war against the elusive ISIS, why do they need to continue the slaughter of the Hazara people? This points all fingers to ISIS who it seems have declared war on anyone who isn’t them.

The lines become very blurred here as ISIS uses The Quran as justification for its practice of beheadings. The Taliban once cited the practices as un-Islamic. We may never know who is to blame in the ever shifting face of the enemy in Afghanistan, nor does it matter.

The goal is clearly to incite instability in an already unstable country.

That’s what terrorists do. So you see, I would think twice before claiming that we have won any wars on terrorism.

Guess Who This Islamic Militant Hit-List is Targeting?!