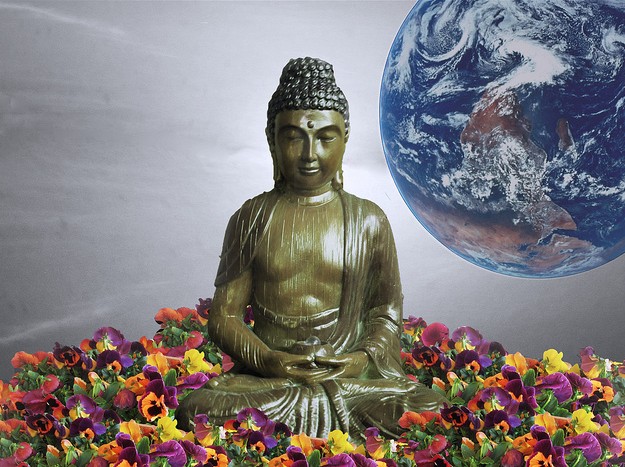 In December, world leaders will meet in Paris for a global summit on climate change.

Buddhist leaders from around the globe, including the Dalai Lama and Thich Nhât Hańh, have united ahead of this summit in a call to action.

In an unprecedented approach, they appealed to the world’s leaders to take a stance on the issue of climate change. These representatives of Buddhism signed a declaration urging leaders to phase out fossil fuels and shift towards 100 percent renewable energies. Never before have they united to take a stance on an issue like this.

Of course, a pillar of Buddhism is protecting the planet and doing no harm. In their declaration they wrote, “Our concern is founded on the Buddha’s realization of dependent co-arising, which interconnects all things in the universe.”

Representatives of Plum Village, founded by our beloved Thich Nhât Hańh, signed on the letter stating,“When we harm the Earth, we harm ourselves.” In a press release related to the appeal, head nun Sister Chang Khong said, “The Earth is not just our environment. The Earth is our mother. We must take action. Not out of a sense of duty, but out of love for our planet and each other.”

Dear Thay, as we call our teacher, has been speaking out on climate change for years, as he has always been gently outspoken, busting through previous barriers and bridging gaps between East and West with his wisdom and teachings. In the days of the Vietnam War he said, “Man is not our enemy. The real enemy is our ignorance, discrimination, fear, and violence. The enemy now is not our governments or corporations, but the energy of greed, mindlessness and indifference.” The weight of these words rings true even today.

Hańh’s gentle wisdom has influenced UN Climate Chief Christiana Figueres. “We need to change our way of thinking and seeing things,” she has said. “We need to wake up and fall in love with Earth.”

How right she is. The Buddhist concept of interbeing has been gifted onto the climate change crisis. Western thought tends to be very dualistic and separate while Eastern thought, especially Buddhist, tends to focus around interbeing—non-dualistic thinking that we are indeed all one, and all connected to each other and our environment.

In his books, The World we Have and A Love Letter to the Earth Thay discusses Buddhism and ecology. In 2007 he led thousands in shifting to vegan diets, as opposed to vegetarian, in the name of protecting our Earth. In his “Falling in love with the Earth” article form July 2014 Thay states:

“Whatever nationality or culture we belong to, whatever religion we follow, whether we’re Buddhists, Christians, Muslims, Jews, or atheists, we can all see that the Earth is not inert matter. She is a great being, who has herself given birth to many other great beings–including buddhas and bodhisattvas, prophets and saints, sons and daughters of God and humankind. The Earth is a loving mother, nurturing and protecting all peoples and all species without discrimination.

When you realize the Earth is so much more than simply your environment, you’ll be moved to protect her in the same way as you would yourself. This is the kind of awareness, the kind of awakening that we need, and the future of the planet depends on whether we’re able to cultivate this insight or not. The Earth and all species on Earth are in real danger. Yet if we can develop a deep relationship with the Earth, we’ll have enough love, strength and awakening in order to change our way of life.”

I hold a deep respect for and am much influenced by Buddhist principles in how I try to practice in my own life, and I believe strongly in living simply, lightly and minimally. Regardless of what or who influences my daily practice, the Dalai Lama was dead on when he stated in his climate change video, “This is not a question of one nation or two nations. There’s no other planet where we may move or shift.”

Pope Francis’s historical stance on climate change is the same. The Pope himself said, “We are not God. The Earth was here before us and was given to us.” So no matter our religion, the fact that across the board these leaders are speaking out on the issue touches me.

Climate change is a very real and very global issue, and we can all do our part individually and collectively.

The Dalai Lama on climate change:

His Holiness the Dalai Lama on Climate Change.