Why We Cannot Blame the Refugees. 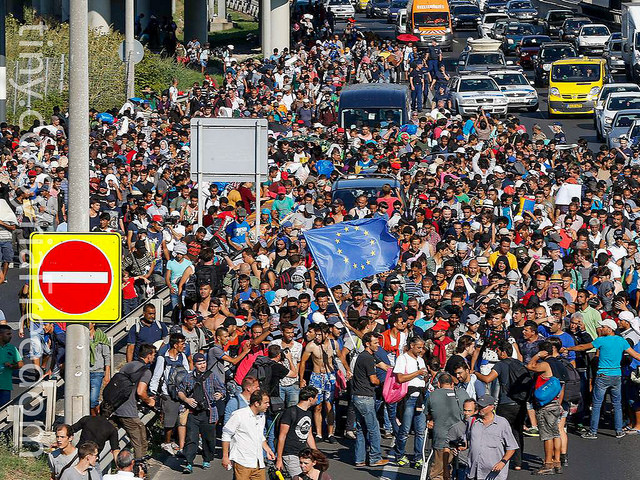 There are currently 59.5 million forcibly displaced refugees without a permanent place to call a home. Over half of the world’s refugees have been in exile for more than five years.

Fifty-one percent of these refugees are under 18 years of age and have no security and no permanent warm bed, regular meals or education. Currently, only half of refugees under 11 are enrolled in a school; only a quarter of refugees over the age of 11 are enrolled.

While many countries are doing their best to provide shelter and security for many of the refugees, thousands have to walk thousands of miles to cross heaving borders and then board overcrowded boats—but as we have heard, the boat is a far safer option than what they are leaving behind.

There have so far been at least 3,511 migrant deaths in the Mediterranean during this year. With winter arriving, the journey will become far more treacherous.

Almost a quarter of a million people have been killed in the Syria conflict alone since 2011—11,964 of them were children.

If we do not take care of the growing problem of refugees fleeing war torn countries, we are running the risk that some of these people may become frustrated, angry and ostracised; they are then vulnerable, and may eventually end up in the hands of terrorists, further inflating our problems.

Unfortunately, after the terror attacks in Paris on Friday, November 13 2015, concern has grown that the people fleeing war-torn countries could settle on European land and bring terrorism there. Many believe that ISIL/ISIS’s plan was to cause widespread backlash for the refugees, as they are angry that they are trying to settle in the West and flee their regime.

Melissa Flemming, spokesperson for the UNHCR spoke at a press conference after the attacks in Paris, saying:

“Asylum and terrorism are not compatible with each other[…] Many are fleeing extremism and terrorism—from the very people associated with the Paris attacks. A world that welcomes Syrians can help defeat extremism. But a world that rejects Syrians, and especially Muslim refugees, will just feed into their propaganda.”

Flemming also spoke about reports that some states were reacting to the attacks in Paris by backtracking on commitments to relocate refugees and ending aid programs:

“We are deeply disturbed by language that demonizes refugees as a group. This is dangerous as it will contribute to xenophobia and fear. The security problems Europe faces are highly complex. Refugees should not be turned into scapegoats and must not become the secondary victims of these most tragic events.”

The UN High Commissioner for Refugees António Guterres also spoke after the Beirut and Paris terrorist attacks, saying it was “absolute nonsense” to say that refugees were responsible for the terror attacks and that they were terrorism’s “first victims.”

Guterres explained, “It is not the refugee outflows that cause terrorism, it is terrorism, tyranny and war that create refugees,” adding, “It is clear that the Daesh strategy is not only to set Europeans against refugees, but within Europe, to set citizen against citizen within communities, community against community within countries, and country against country in the Union.”

Guterres also explained his belief about a refugee passport being left behind at one of the terror scenes in Paris, saying, “The passport was left to be seen, which means that the Daesh also has, as a strategy, to put the refugees in the spotlight[…] this is also designed to try to force Europe to close its borders. So to try to blame the refugees is absolute nonsense.”

One 19-year-old female refugee spoke after the terror attacks in France, but was to afraid to give her name. She said:

“It is the key to process these events and to prevent misconceptions about who the guilty ones are. As a French Muslim, I worry that this massacre will be used against the French Muslim community by politicians, like it happened back in January when Charlie Hebdo was attacked. But I also worry that refugees, especially those coming from Syria, will be the next target of conservative politics and racist acts.”

Asif Arif, director of the Ahmadiyya Muslim Community in Paris, said he expects that more Islamophobic incidents will take place:

“This is not an usual thing. You’ll now definitely see a rise of attacks against Muslims and not just in Paris, but in all of France.”

Muhammad el-Khaoua, a 24-year-old graduate student in International Relations explains, “Right now, we are guilty unless proven otherwise. We have every reason to be afraid.”

Although there are many people who find it unacceptable that people are fleeing war torn countries and trying to find peace in Europe, there are also many who are speaking out so that we see refugees as individual people, rather than just one word, “refugee.”

Sadly, we don’t know and can’t possibly know each story. Refugees are classed together as a group of tens of millions of people, and we know very little about the hardships, terror, grief, suffering, loss and insecurity that the majority of them face on a day-to-day basis.

Humans of New York have worked with the United Nations Refugee Agency to deliver some of the personal stories so we can put a face to some of the refugees. We then stand a chance of gaining a better understanding of a small amount of what they have had to endure carrying only a glimmer of hope that they will eventually reach safety.

Brandon Stanton, the photographer for Humans of New York, wrote on his Facebook page:

“Together, these migrants are part of one of the largest population movements in modern history, but their stories are composed of unique and singular tragedies[…] Despite paying Turkish smugglers $1500 per person, the refugees are loaded into boats that are filled to many times their capacity. The boats usually leave at night to avoid detection. Often the refugees arrive carrying nothing but horror stories. Unfortunately there is little waiting for them on the other side. If they are lucky, a handful of volunteers will meet them on the beach with a bottle of water.”

It is essential that we create stability, show unity, show compassion and give the refugees faith that the world is not looking away. It cares, and it cares today. Not tomorrow or next year or when lost paperwork has been replaced or when they have become a victim due to the increasing amount of concern and fear that they may be terrorists.

Simply by opening our minds, understanding that we cannot brush everyone with the same stroke.

There are tens of millions of innocent people struggling right now, and each one of their lives is worthwhile. We cannot allow widespread fear to tarnish how we see them. Terrorism is the very thing that millions of them are fleeing.

We have to do whatever we can to help create some kind of stability, whether that is just by offering support to people of a different culture who live in our neighbourhood, or by donating material or financial support.

We can’t turn a blind eye and allow more destruction to spread on the planet that we all share, as we all have a right to live in safety. When we turn on one another, we are giving the terrorists what they want. We absolutely have to reclaim calm and unity to have any chance of a peaceful and stable future.

We are all concerned that terrorists may be crossing borders along with innocent refugees, which is why it is essential that we tighten border control and know who is coming into and out of each country.

Following the attacks in Paris, Germany’s chancellor, Angela Merkel said, “The era of uncontrolled migration and illegal immigration is over. Paris changes everything.” I agree wholeheartedly. We should be controlling who enters each country, not just to protect existing inhabitants, but to protect the innocent refugees too.

Something Everyday People can do to Help the Refugees.