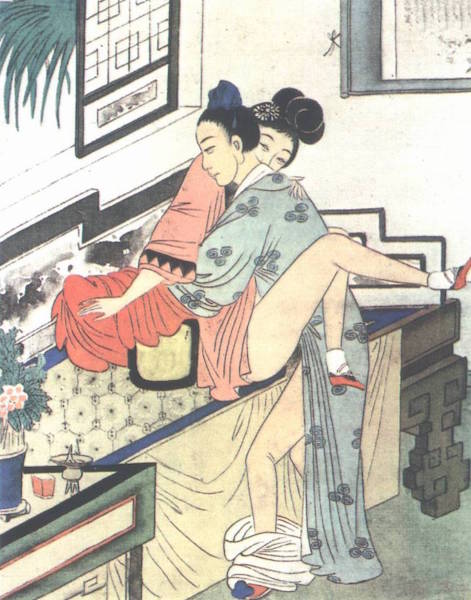 I was walking in the park by the art museum downtown Milwaukee. Out in the open, next to a patch of woods was a 10 point buck.

This was one big deer; it was mid day, and I was shocked to discover people walking by without noticing it.

They didn’t expect it to be there, that close to downtown, so they didn’t see it.

When you don’t expect to see, hear or feel something you are less likely to notice it. Most men experience orgasm and ejaculation as a couple: happening at the same time. So they aren’t likely to discover that they can have many orgasms without ejaculation.

In much the same way most people don’t have orgasms as they ride the elevator, take a walk in the park or sit in rush hour traffic. But just knowing that they can, and that some people do makes it more likely that you and I will.

And if we do, won’t that change the whole flavor of traffic jams?

Let’s explore how you might be able to have a lot of fun with orgasm, just by altering your perception of what is possible.

If you want many more orgasms, whether you are having sex or not, read Shoot the Moon.

If you are a man or want your man to experience multiple orgasms try When One Orgasm Isn’t Enough.

Having many orgasms is much more about energy than it is about having more sex.

With enough sexual energy you will naturally orgasm.

When I got home from a particularly intense Iron Shirt Chi Kung workshop I cuddled up next to my partner. As I usually do in such a fabulous situation I relaxed waiting patiently to discover what would happen.

Often, the key to great play has nothing to do with reaching for a breast or rubbing a thigh like you have done before. And much more to do with being open, fully curious to discover what you do next.

I reached for her ear lobe and held it between my thumb and first finger. I had no idea why. But after about a minute she began to shake, a little at first and then more. What followed was seven full fledged full bodied orgasms. I held on for the 10 minutes that this wild ride took: amazed.

The explanation I came up with afterward is that I was flowing so much energy, especially sexual energy, that orgasms resulted. I have no idea if this is actually what happened. Often the stories we tell ourselves after a miracle are less miraculous than the miracle itself.

Over the next several days I discovered that she could orgasm regularly without any stimulation of her sexual parts. She dug it, and it blew me away.

It also expanded my world of sexual possibility.

One of the practices that we had done in the Chi Kung workshop is we had stood still for almost an hour. That is a long time to just stand without checking your phone or reading a book or watching TV.

I needed something to do, so I imagined the center of the Earth full of sexual energy, like a soft sweet Tootsie Roll Pop. I reached into that soft center and pulled that sexual energy all the way up to my belly.

For the better part of the hour I pulled more and more. When the teacher announced our standing was done I wanted more. I had dreaded the idea of standing that long, but felt like I could remain there forever. For several days afterward my sexual energy raged through every part of my body. I felt young, powerful and alive, younger than my years.

I could focus attention on my shoulders, wrists, or feet. And when I did it felt like the best sort of energetic massage possible. I discovered not only that I could have as much energy as I wanted, because I only needed to pull it from the center of the Earth, but that sexual energy is both arousing and healing.

As I mentioned, when I got home I discovered that the sexual energy I had accumulated generated multiple effortless orgasms too.

When one orgasm isn’t enough

For a man to have a second, third or fourth orgasm you need to tempt orgasm out from behind ejaculation, discovering that they aren’t Siamese twins.

You can have an orgasm without ejaculation, and that is the key to male multiple orgasms.

Doing so you will discover that the edge isn’t as distinct as you imagined. When you don’t rush over it you can hang out there, feeling many sensations that you haven’t noticed before.

With practice you will get ever closer to orgasm, and in the process you will be making more subtle distinctions learning about your sexual self.

One day, or evening, you are in for a great surprise. You will get right up to the edge of orgasm and a full body relaxation will greet you there. Instead of crossing the border you will stand on it: orgasm will come out to meet you, without ejaculation.

Make no mistake, this will be a full bodied, sparkly, tingly orgasm. It will light you up, but there won’t be a let down on the other side of it. Your penis likely will remain hard and you will continue to be sexually excited.

It may take some practice to experience your first orgasm without ejaculation. But it won’t be long until you have the second, third and fourth.

Like riding a bike you will have discovered the knack of it and be able to have as many orgasms as you want.

But be gentle with yourself, no need to go for the Guinness world record for the most consecutive male orgasms. And feel free, if you wish, to cross over the border and ejaculate anytime.

Ejaculation after several orgasms reveals that orgasm is grown up pleasure and ejaculation just a release of energy, leaving you a little forlorn or disinterested.

The Secret to Unconditional Sex. {Adult}