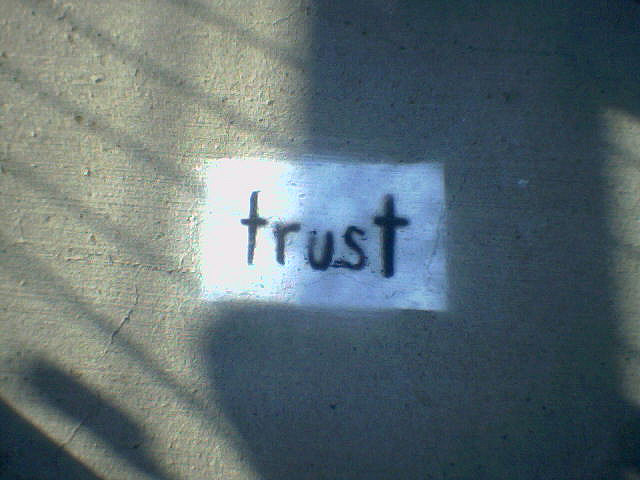 Trust—it’s only five letters long, but it’s one of the biggest words in my life right now.

Over the last few years, noticing the patterns continuously playing out in my life, I realized—I have a huge issue with trust. Not just a little inkling that I needed to learn to trust more—no, more like I needed to relearn the whole concept of trust again, so that all of my relationships were no longer controlled by the lack of trust that I had in everything and everyone.

It’s all I have ever wanted—to trust. To fully trust those around me—the people I love, the people I work with, my family, my friends, the man at the store, the woman on the phone—I just wanted to be able to feel that I could trust them, all of them.

Then one day, a scene flashed before my eyes. I was a small child, about nine years old, or maybe ten. I was standing outside, with a big piece of plywood in front of me. I quickly pulled the wood up over the front of my body, shielding me from whatever was on the other side. Betrayal, lies, secrets. I needed something to protect me from ever again being the recipient of such hurtful dishonesty.

This scene was not one that actually happened in real time, with real wood or a real me. But it did happen on a soul level. At this young age, I had created a protection to keep myself safe from the pain of betrayal.

I had my first real experience of true and utter betrayal when I was quite young. It was at a very pivotal and formative time in the belief systems and patterns I would carry with me, on a subconscious level, for many years to come. As most of us do, I’d had numerous little snippets of betrayal already in relation to my siblings, as we all learned how to grow and become independent of one another, finding our own foot hold in the world while leaving the next one behind.

These experiences shaped my relationships of the future as well, but that is another story—one that birthed my fear of abandonment and fear of being left behind for something or someone “better,” more fun or more mature. But this betrayal, that came forth from the mouths of my parents, was perceived by my young innocent heart as the ultimate betrayal and resulted in a shock to my psyche and nervous system that has taken me years and years to heal.

And I’m still healing—I am becoming healed. I am becoming whole. I’m finally, truly starting to feel the trust returning to my system. I’ve learned to forgive the people who kept things hidden from me. I now know they were trying to do the best thing—they never intended to plant the seeds of betrayal or mistrust in my soul.

I spent the last two years in a deeply intimate relationship with a man who I wanted to trust with all my heart. But it wasn’t there. We had little bits of trust, but we didn’t have big trust. We didn’t have the kind of trust that makes you feel safe—safe to be vulnerable, to be in a heart wide open state, to be raw and real. I didn’t feel it. Both of us had our own lessons to be learned in the realm of trust.

I spoke to him about what I was going through. I told him about how I had felt betrayed as a child, and how I feared—in all of my relationships—that I would experience this same kind of betrayal again. I tried my best to be open, to be vulnerable and to be real in the moments that brought up so much historical pain. But as much as I tried, I still couldn’t trust.
And so, as these patterns will keep cycling through our lives—until we break them once and for all—learning the ultimate lesson that we’re being asked to embrace, I got to experience this painful pattern once again. Straight from the man who I had shared my deepest fear with.

Strangely—and yet not so strangely at the same time—a similar story unfolded before my eyes. Secrets kept hidden, a pack of lies played close to the heart—it left my head spinning and my heart frozen in fear.

After dealing with the initial shock—I took a step aside and chose to heal, once and for all, my issue with trust. And so this time it’s different—I’m aware. I’ve awakened to the fact that in each secret that is kept tucked away in a deep abyss, it is done so, not out of the desire to hurt or a penance for pain, but out of a person’s own inability to trust the divine flow and unfolding of life. It is done to try to skirt their own reality, for just a little bit longer, so they can try to figure out the best way to deal with it.

Sometimes secrets are kept because the realness of the situation is too painful to deal with—or it’s too confusing or too hard to face. But secrets are never kept to hurt me. It’s not personal anymore.

Another person’s secrets and betrayal are not about me. They are strictly and solely about that person’s relationship with themselves.

I am not a victim of betrayal, I am player in life unfolding.

And so I need to learn to trust myself.

Trust, to me now, is not something I seek in another being.  Trust is what I hold in my heart, with a deep knowing that every moment is transpiring just as it is meant to.

When I hold this knowing at the core of my own being, trust itself becomes part of who I am.

Trust is now one more aspect of my own awakened wholeness.

On Brene Brown, Braving Trust & How a Roll of Paper Towels Changed my Life.

Trust is a State of Mind. 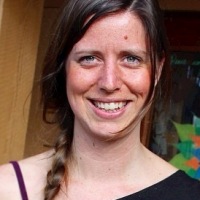