Why Christmas is not just for Christians: 10 “Christmas” Traditions that are Actually Pagan. 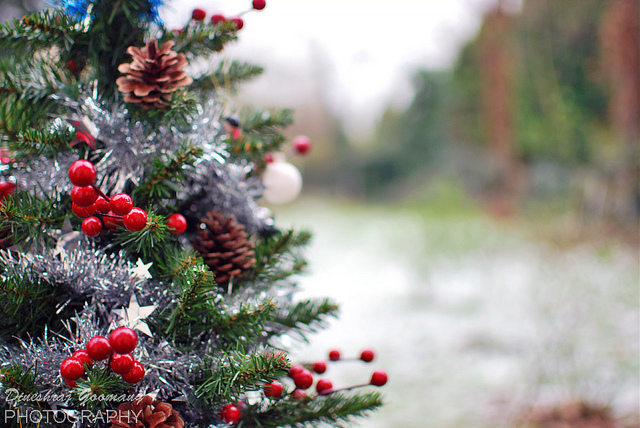 I am not a Christian, yet I celebrate Christmas every year in the spirit of Yule-tide.

I was brought up Catholic to the point of being confirmed, and then my parents pretty much gave the go ahead to make my own religious and/or spiritual choices.

I turned away from religions for many years, due to what I labeled hypocrisy, and I forged my own path through life, eventually coming to my own practice and understanding of religious beliefs, spiritual practices, and what works for my own  heart and soul.

Without labeling myself as any religion or belief, I want to share why I still join in Christmas celebrations. So much of modern day Christmas is actually borrowed from Germanic and Pagan traditions, which were assimilated into Christian celebrations to make the forced shift to Christianity more palpable to those peoples.

The Winter Solstice in the Northern hemisphere is the shortest day of the year and the longest night of the year. The next day begins the return of the light half of the year, where the days grow longer and longer until the Summer Solstice.

Pre-Christian people of the Northern hemisphere celebrated this time of year as Yule-tide—the returning of the sun. On this night, Christmas Eve as we now know it, our ancestors celebrated the rebirth of the Oak King, the Sun King, the Giver of Life that warmed the frozen Earth. From this day forward, the days would become longer, and this was cause for much joy and celebration. This is what I honor in my celebrations of Christmas.

I don’t feel the need to argue and debate what it needs to be called. That is just a label and I have no use for labels in my life. Anyone can call the holiday whatever they want, whatever makes their hearts happy, and they can wish me a happy, merry, joyous, blessed or whatever they may say, and I will take it to my own heart as a well-wishing, finding no cause to take offense for their beliefs.

So for anyone who wants to claim Christmas as “theirs” or make it all about a religion, or not a religion; or for anyone wondering if they should even celebrate when they’re not a Christian, here’s some historical pagan/earth connections that we can all rejoice in honoring, as well as the ways that Christians are still honoring nature without even realizing it:

Kris Kringle—He was the Germanic Pagan God of Yule who was morphed into the modern day Santa Claus, aka St. Nicholas bringer of gifts by Christianity.

Mistletoe—Was hung as decoration. It represented the seed of the Divine, and at Midwinter, the Druids would travel deep into the forest to harvest it. Represents fertility because it too, grows green in winter. Bonus: “We kiss under the mistletoe to honour Balder, the Norse God, and brother of Thor.“

Christmas tree—The decorated evergreen tree was originally a symbol for “Life Eternal.” Even in the dead of winter this tree bloomed green and full of life, thus it was used to symbolize life.

“Deck the halls, with boughs of holly”—The boughs were symbolic of immortality. Because holly and evergreen didn’t die they were considered sacred to the Celts, representing the eternal aspect of the Divine.

Pine cones and nuts—These were a representation of the sleeping Earth. In winter after the autumnal harvests the Earth went to sleep in the dark part of the year.

Caroling-–Originated from the tradition of wassailing. This took place in two forms. One was an event of wassailing to the trees in an orchard as a blessing for the trees to thrive and live long in the coming spring. Next was an event on 12th night of wassailing, which was an exchange between feudal lords and their peasants/tenants. The tenants sang songs at the doors of lords in exchange for food and hospitality. Not begging, but a reciprocal exchange. “Here We Come A’Caroling” was derived from the original “Here We Come A-Wassailing.”

The Yule Log—Every year we watch the TV put on the Yule Log for days on end, without ever really understanding what it is. This was usually Ash in Pagan tradition, dragged in on the solstice, lit with a piece of the previous year’s Yule Log, and then left to burn and smolder for the 12 nights of Yule-tide. It was then ceremoniously extinguished and saved for next year. Ash was considered a bringer of light into the hearth.

The Divine Child—One of the major Yule Deities was the Divine Child. Yule was a celebration of fertility and rebirth. Of peace, love and harmony. It’s only natural a Divine Child would celebrate this. And evidence actually reveals that Baby Jesus was not actually born on December 25th. This was just incorporated to smooth the often bloody and forced transition as Christianity overtook Europe.

Red and green—Ancient lore states that the belief was that from the time of Halloween to Yule-tide, the veil between the world of the living and the world of the dead was at its thinnest. So red represents blood and green soil, or earth. Red is attributed to the God of War (Apollo, Mars, Thor, Aries, Osiris ), and green to the Chthonic God (Dionysos, Iormigundr, Pan, Apophis).

As this holy-day season approaches I encourage us all to celebrate mindfully. Let’s stop trying to make everyone who disagrees with us “wrong” and ourselves “right.” If someone doesn’t want to do “Christmas” respect that. We can wish them happiness and blessings in whatever way we would like, it is our intention that speaks through our words.

If someone chooses to take my well-wishing as offensive, well that speaks of their mindset not mine, and that’s okay. I wish blessings and merriness to all those who cross my path with a kind heart, and honest well-wishings, thus I have yet to have someone stop and tell me I’ve offended them.

There is no need for me to shout “Merry Christmas” at someone who is clearly Muslim or Jewish. That’s just obnoxious. And it’s not American either. American’s need to learn our nation’s history before running off with the argument that we are a “Christian Nation.” Sorry folks, if you believe that, you have been duped.

Let us embrace this joyful time of year with pure and loving hearts. Let us be mindful of one another’s rights of religious/spiritual freedoms. Let us let go of our clinging to idealistic beliefs and viewpoints so that we have some sense of identity. Let us love one another and find peace in our hearts so we may bring it out into our bleeding world. Let us find unity instead of division. Let us all find gratitude and love for our fellows.

Let us find inclusivity to all and to all a good night (pun intended).

These are the wishes and blessings that will be behind every single “Merry Christmas,” “Happy Holidays,” or “Happy Chanukah” that I utter this year.

The Imaginary War on Christmas.