8 Ways We can Sabotage a Relationship Before it Even Starts. 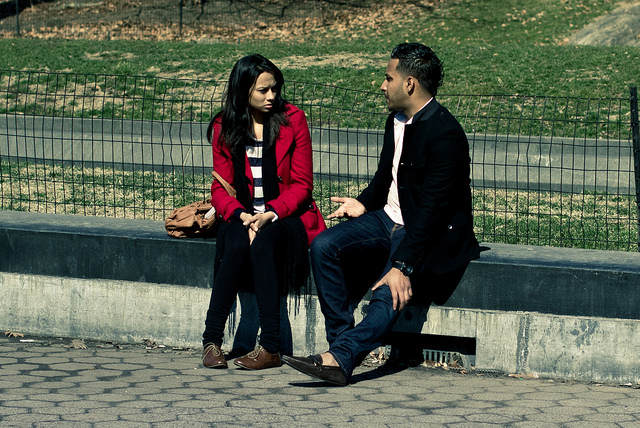 My friend *Eve (*not her real name to protect her identity), sabotages almost every relationship she starts before it ever gets off the ground.

She meets somebody she really likes, gets through the first or second date, and then pulls a litany of damaging and cringe-worthy moves that make every guy second guess his decision to date her.

Then they stop returning her calls and text messages after what were actually decent dates.

It makes me feel horrible for her, but at the same time when I point out what she’s doing that might be driving them away, she fails to listen, then repeats the behavior the next time around and wonders (again) why she’s alone.

We all have some baggage. Even if we’re in our early 20’s and still fresh to the dating scene, we have probably at some point in our lives been let down, had our hearts broken, or been raised to have certain expectations of people and relationships.

Although our experiences have been different, the one thing we all have in common is that most of us are looking to find someone we’re attracted to, have a great connection with, and can be in a committed relationship with…if not forever, then at least for a little while.

Unfortunately there are a lot of ways we can sabotage a new, potentially great relationship before it ever gets off the ground. These are some of the most common complaints I hear from friends that make them cut things off after just a few dates.

The #1 sure fire way to be disappointed with anything is to have a fantasy already created in your mind about how this relationship should look and how it should play out. The reality is, you just met the person, you’re probably just getting to know them unless it’s somebody you may have been friends with first, so you need to give it a little space to organically become what it’s meant to be.

Don’t have any expectations going into it, and if it turns out to be a wild, burning, hot romance, then think how much sweeter it will feel since you never saw it coming!

He sends a text. You analyze what he said, word for word even if it was just “Hey… I just wanted to say hi.”

She doesn’t respond to your phone call within a day, and you get pissed off or upset and make it mean that she’s blowing you off.

You over-think your last date ad nauseam, wondering what it meant when he said that he’s never met anyone he’s ever wanted a long term relationship with: What? Does that mean he doesn’t want one with you?

Let’s admit that we all do this to a certain extent because we want some kind of assurance that the other person is into us—but there’s a limit to how far this should go. Not responding to someone’s phone call or text message for a certain period of time because you want to appear “cool” or unavailable is typically going to make them think you aren’t into them.

And when someone thinks you aren’t into them, they start to lose interest fast. Why invest time in someone who doesn’t seem to want to invest in you?

Similar to playing the hard to get game, many of us are scared to make the first move—whether it’s asking for the person’s number at that initial first meeting when you sense interest, setting up the first date, calling first, or following up with a flirty text or phone call after a date that went well.

Why do we do this? Is it so hard to let the person we’re interested in know how we feel about them without feeling like we’re going to combust?

Apparently it is, since so many of us are doing this and then we’re regretful later when a person we had real feelings for walks away because they think we’re not into them.

5) Expecting too much too soon.

Whether it’s time spent together, constant communication throughout the day, some kind of commitment that you’re exclusive and aren’t going to date other people, everybody moves at their own pace. Sometimes one person is more sure than the other and wants things to move faster while the other person is like, “Whoa nelly…I’m not even sure yet I want to be in a relationship!”

Relationships don’t need to be rushed. Unless you only have like… a year to live and you feel the urge to get one last relationship in before you die, take it slow and enjoy the ride.

6) Jealousy over past partners.

We’ve all at some point in our lives, been in love with somebody else and had other serious relationships. And those people have helped mold us into who we are today. But being jealous over your current partner’s exes is really nothing but a mirror of your own insecurities and will cause a whole lot of conflict and fighting if you can’t get past it in the beginning.

If you really can’t trust that the person you’re dating isn’t over an ex or is still pining for them, you might ask yourself whether you’re ready to be in the relationship yourself. There are very few things that turn both men and women off more than a jealous partner.

7) Making assumptions about how the other person feels.

It’s common that in the beginning of any new relationship that we’re going to be a bit more guarded with our emotions and feelings to protect ourselves. And sometimes this can lead to making assumptions about how the other person is feeling or not feeling as a way to “fill in the gaps” as to what is not being said.

Better to just put it all out on the table and ask when in doubt. Open and honest communication is the only way any relationship has a shot at working.

“Well, I called her the other day so it’s her turn to call me,” or “I’m the one that asked him out on the last date. He should be the one to initiate the next one.”

When we start keeping score as to who did what and who owes us something, we’re sure to end up frustrated and disappointed. One person is ultimately going to feel that the other person isn’t keeping up their end of the polo match game and walk off the court before the game has ended.

And that would be rather unfortunate since the game was just getting started.

So many of the things we do are really just a matter of wrestling with our egos. But if we want to give a potential relationship a real chance… some patience, honesty, willingness to put ourselves out there and genuine trust in the other person will go a long way in increasing the chances of success.
Bonus: Start off your new relationship right: