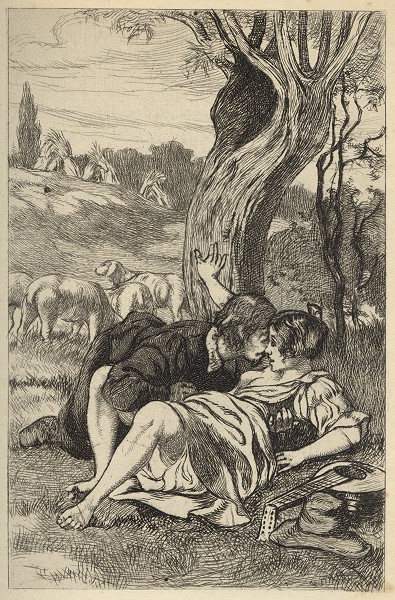 Three men went on a search for the secrets of the vagina. Of course it was a mistake to send three men but one was a scientist, another a great lover, and the third was a poet. They thought their bases were covered.

The scientist approached the vagina first, with tools to prod and poke. He moved slowly, searching only for what he could prove. But the vagina danced and joked and shifted its shape. It made itself endlessly unpredictable. The scientist threw his hands into the air and stormed off, muttering to himself about how he would rather study the distant planets than try and please his spouse.

The lover was more confident. He knew Tantric sex techniques proven to make even the most disinterested vagina sing. But his attention remained on his own prowess and he was too full of his past accomplishments. After all he was a great lover! But the vagina was not impressed or interested in his past exploits. And the lover gave up long before the vagina yielded her secrets.

The poet, even more distant than the lover, spoke of flowers and children, of wonder and mystery. The vagina laughed and realized the poet himself already lived in a mysterious world. He lived in a world all his own, excluding anything real and always courting obscurity. The poet never even noticed the vagina; he was too busy spinning out magical worlds only he could appreciate.

Despite their inane and trained talents these men could not discover what it is that makes the vagina/woman so magical. That will be left up to you and me.

A vagina cannot be measured, controlled, or coerced. Men through the ages have preferred battle in distant lands to the mysteries of love at home.

While a vagina is not the final frontier, it is a base camp for the final trek to enlightenment. When you are able to dance with such a dicey partner as the vagina you can rest lightly on the inherent iffy-ness of life. Whether you have your own vagina or seek access to one, you know that nothing short of mojo will keep that dynamo humming.

The first secret to courting a vagina: do not do unto a vagina what it expects you to do unto it.

While the same nut requires the same sized wrench day in and day out, a vagina never succumbs to the same charm more than twice. The appetite of vaginas/women wanders more widely than a puppy with ADD.

Women and vaginas are dynamic and transient creatures; they thrive on changing conditions. They want attention and they seek it through endless variability.

If you are driving across Western Nebraska the road is flat and straight, so much so that you may tend to space out and still end up in Colorado. But once you get to the mountains the roads are so curvy and rugged, ever changing, and suddenly that lack of attention can lead to disaster. All the same, a lack of attention to the variability of vaginas/women leads to sexual disaster.

Penises however require predictability. A man likes his package handled in the same way over and over. Vaginas seek the opposite to assuage their desires. But random unpredictability will not do. That would make loving a series of non-sequiturs. And it most surely is not.

The secret to the best sex ever is to hear what a vagina/woman is asking for before it/she knows. And then, without hesitation, deliver exactly that.

A touch here, attention there, a different tempo or thrust; only vaginas/women know the way to profound and unconditional sex. Follow her surreptitiously, by paying such close attention that you notice where she wants to go before she does. That results in sexual mastery shared by the two of you.

Without cues from the vagina/woman sex is sure to go awry. The first advanced female sexual secret is to dance with the endless unpredictability of a vagina/woman.

Wooing a vagina/woman is a timeless and spaceless pursuit, which really makes it is no pursuit at all. It is holy, in that where you are is exactly where you should be. And if you notice where you are she experiences safety and approval.

Embrace yin by noticing her emotions, her sensations and her thoughts. Melt into all three of these. When you do so you let her know that she is perfect just how she is.

Treat her body in general and vagina specifically as though it is the holy grail of sexuality. Let it offer you a safe place to settle into.

Don’t fantasize about being somewhere else, because right where you are is as it should be. Let your attention be of a single focus: her.

There is nowhere to get to

Give her the gift of your undivided attention. Let each moment overflow with pleasure: that way you enjoy the journey, without destination.

Bring your attention and your touch to her fully. Doing so sets fire to wherever you touch and you won’t need to seek pleasure, it will find you.

Touching is not a means to an end, it is an end in itself. When you are not going anywhere sexually you will be tickled with where you end up. If you are going somewhere specific: like to orgasm, then you will miss the scenery.

Yin glitters with orgasms, tiny ones that often go unnoticed. They provide a trail to bigger orgasms and the biggest life affirming orgasms. Follow the orgasm road.

I slowly slid my middle finger into my sweetie’s vagina.

A secret of vaginas and other unknown places: move slowly when you have no idea where you are or what you are doing.

“Move your finger down, yes, that little disk is my cervix,” she said.

“Put your finger on the right side of the disk and slowly, evenly, push to the left,” she said.

I did just that for about six minutes when a magical thing happened. Her legs tightened and she emitted a loud groan. Her body twisted and every muscle moved. This was not sexual pleasure; it was physical pleasure. Another few minutes on the right side of her cervix brought more “releases.”

When I sensed that it was time, I moved my finger to the left side of her cervix and hung out there until the darnedest thing happened. That side woke up with orgasms. I had no idea what I was doing but it was working so kept at it.

I began to free form, moving to the top and pushing down and then vice versa. Each positional shift resulted in more releases. Not immediately, but after a few minutes which taught me something else about vaginas.

Vaginas operate on vagina time. And it is not about the clock or what you are doing. Vagina time is about sensations and releases. You touch and hold until sensations rise up. When you court a vagina on the vagina clock it will not be long before you are having some of the best sex of your life.

After that session with her little cervix we had wild, uninhibited sex. Her vagina was fired up and on fire.

“Nobody I have been with would ever do that for me!” she panted gratefully.

I could not fathom why not. The payoff was so grand. The process of my finger spending time in her vagina and my hand pressed against her pubic area was some of the best medicine I have ever experienced.

Age 61 years; it was my first real vagina lesson. And there were many more lessons to come.

The Art of Giving an Orgasmic Yoni (Vaginal) Massage. {Adult}