“Almost Happy” is not Happy. {Fiction} 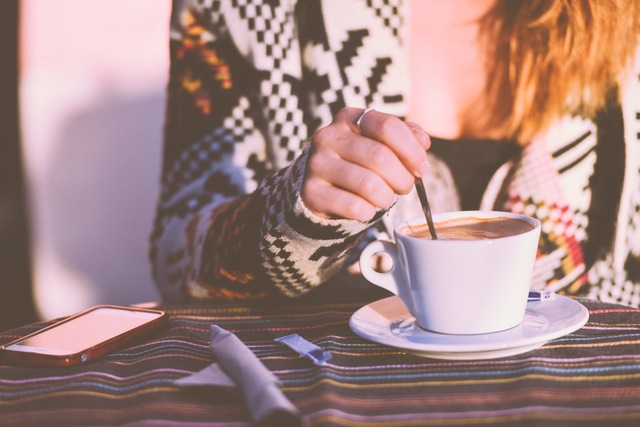 She was almost happy, this little girl in a grown up world—the pain and fear would fade when she was with him. In the beginning she still had the dream about the dragons, but they weren’t as frequent and she no longer dwelt upon them the way she used to.

Maybe it was the way he made her laugh or the way he listened to her stories when she struggled to get to the point. It had been so long since she felt truly safe.

“Damn,” she said realizing she had forgotten her purse again.

The barista stared at her with that vacant disbelief and judgment that made her feel small and inept. She could feel the heat of impatience from the caffeine-deprived addicts behind her.

“I got this,” said the man with kind eyes and unruly hair.

She tried to refuse the coffee but shame gave way to pride and she just wanted to get out of there—and she really needed coffee. The night before had been late and it was freezing outside today so she tipped her head in a grateful nod and mouthed “thank you.”

When the girl behind the expresso machine announced, “Cara. Venti caramel machiatto,” she muttered something about paying the man back and hastily grabbed the cup, her face still flushed with embarrassment. Glancing over her shoulder, she managed a waive of gratitude to the man without actually making eye contact and fled.

That had been seven months ago.

They began seeing one another about a week later. At first it was just her paying her debt, insisting she buy the man’s coffee. When he asked her name and to sit and talk for a few minutes she didn’t know what to say. He was already offering her a chair and for some reason she just sat down. Somehow small talk gave way to more vulnerable things and by the time she realized what time it was, that she was going to be late once more, she had agreed to dinner.

She thought about making up an excuse and telling him she couldn’t make it but she had never been a good liar. Besides, it was just dinner. “You can just have dinner with him Cara,” she told herself. A few weeks later, she realized she was breaking all her own rules again and, quite possibly, falling in love.

He didn’t try to control her. He wasn’t a stage five clinger. He was nothing like Caleb. That had ended badly and she had vowed not to fall in love again. At least not for a while. She needed to get herself together. The therapy was helping. She was figuring out what she needed and wanted and how to be alone. She wasn’t about to let the candle she had worked so hard to ignite be blown out by some stupid infatuation. But he did have those kind eyes and he was gentle. At first she didn’t think he was attractive. Something about his nose was funny when she looked at him from the wrong direction. Still, he was awkwardly handsome.

“So what do you want, Cara?” her therapist always asked her. That question had always pissed her off.

“Who knows what I want? Does anybody? I mean look at the world. Nobody posts pictures of the crap in their life on Instagram or Facebook.” If she were still on FaceBook her status would be “feeling confused” most of the time. If she was honest—but God, nobody is that honest and relationships are hard. People get sick. Children die. Terrorists. Life is difficult. “What do I want? I want a cure for cancer. I want world peace. I want Ben and Jerry’s.”

After about five months she knew it wasn’t going to work. But he was safe and nice and it had become kind of a habit. Not a bad habit. Just a habit.

“I want more than a habit. I want more than safe.” Maybe the bad dreams would come back. Maybe she wouldn’t laugh as much. Maybe she would be lonely. But somehow she found the courage to tell him that even though she loved him, that she would always love him, she didn’t want to see him anymore. She had managed not to say “It isn’t you. It’s me.” She always thought that was bullshit and that was one rule she wouldn’t break.

Being almost happy just wasn’t enough. Realizing that had been an epiphany, frightening as it was. Once again her relationship status was “it’s complicated.” She laughed when she thought of how getting along with herself was the most important thing about loving someone else.

“Damn, girl. Maybe you do know what you want. You just need a little more time,” she said.

She handed the man a five-dollar bill and closed her purse. When she picked up her cup of coffee she looked around the place to see if Caleb was there. He wasn’t. She looked at her watch and realized she was late again and decided that was okay.

She sat down gazing into the sunlight. Watching the traffic and people walking by, she sipped her coffee.

Almost happy isn’t happy, she thought. And she smiled.