Fathers, Be Good to your Daughters. 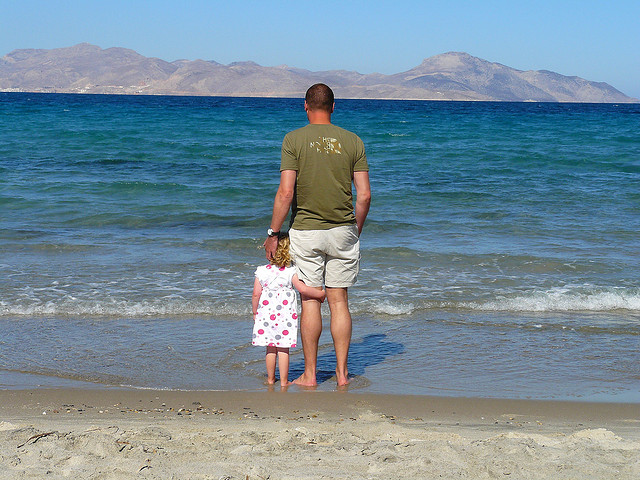 I watched you grow up, proving yourself to the neighborhood kids by being stronger, faster, and more adept at whatever that thing is you chose to do.

I watched as the testosterone took over in junior high and took your voices through a series of squeaks until it landed at a lower octave. And I watched as you went through your early twenties, doing things that I won’t even share for fear that your mothers (or mine) might find out.

To some of you, the most ironic thing happened. One day, you were chugging beers and lighting farts on fire; the next, you were crying happy (and terrified) tears as you were handed a tiny bundle of pinkness, hearing the beautiful yet intimidating words, “Congratulations! It’s a girl!”

Women have a lifetime of preparation in raising girls. After all, we came with the same parts and the same tendency to share all of our feelings all of the time. It may not be easy for us, but mothers and daughters understand each other in ways you never can.

Girls are inundated with messages about body image, and they take a toll. According to the National Eating Disorders Association, 20 million women—mostly girls and young women—suffer from anorexia, bulimia, or other eating disorders in the United States. Even without that shocking statistic, studies show that how you relate to your daughter has a significant influence on her academic and career choices, as well as decisions she makes about relationships and sex.

So how do you raise daughters to be confident, compassionate, and well-balanced? There are no simple answers, of course, but here are a few things to keep in mind:

1) Don’t talk about others, positive or negative, based solely on their appearance. By objectifying women, or by openly judging people for being overweight, unattractive, or even attractive, you are showing your daughter that looks are the most important thing about a person.

2) Compliment your daughter on things other than her appearance, and spend time cultivating those skills or talents. Let her know that looks aren’t everything. Whether she is good at math, music, or basketball, praise her (in front of others, too!), and actively help her to cultivate those talents.

3) Respect her mother. It doesn’t matter if you are married or not, or whether or not you and your daughter’s mother even like each other. Always show respect for the woman who is the most important female influence in your daughter’s life. Make sure you are an example of the man you want your daughter to love someday.

4) Meet her more than halfway. Your daughter may not like the same things you do. Take interest and an active role in her passions. This may mean you’ll have to develop an appreciation for theater, dance, or some other thing you never dreamed you’d be attending, but do it anyway, and do it often.

5) Recognize female role models. Make it a priority to point out women who are revered for things other than what they look like. There are many women throughout history, in the news, and, chances are, in your own town who are strong, talented, and accomplished. Talk to your daughter about them, and let her know the sky is the limit!

6) Recognize when women are objectified in the media, or in real life, and talk about it. When women’s bodies are used to sell cars, or when women are portrayed as “dumb blondes” or trophies, point it out, and let your daughter know she is more valuable and has so much more to offer than just her body.

7) Empower her to speak. Many girls (and women) talk their way through feelings, and they have a lot of feelings. Be patient, and be open to any subject she wants to talk about. Let her know you love her unconditionally (tell her!), and maintain an open door when she needs to share. This is so important on a day-to-day basis so that, if big issues do arise, your daughter will know she always has a safe place to land.

8) Let your daughter know she does not need to be perfect. None of us is perfect. Don’t be afraid to make mistakes in front of your daughter, and talk about it afterward. Say you’re sorry. Exercise forgiveness and compassion, toward yourself and others, and teach her to do the same. You’ll cultivate a healthy mental and emotional attitude, and teach important relationship skills at the same time.

Being a parent isn’t easy, and shifting into fatherhood—especially when you’re gifted with a girl child—is no easy transformation. Your role is more important than you know. Before you know it, your little girl will be grown up and on her own. You, and you alone, can empower her in a way no other human being in the world can.

Hold on, hang in there, and enjoy the ride. It’s about to get good, Dad. Really good.

An Ode to the Fathers of Strong Daughters.