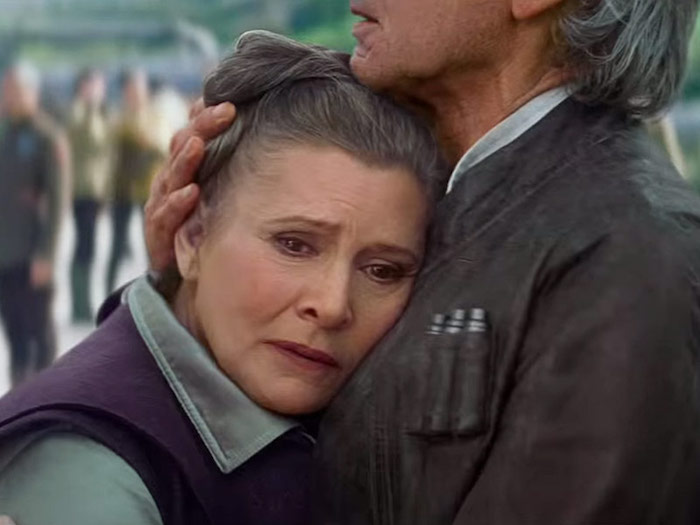 By now, most people who’ve been on social media in the past few weeks are aware of Carrie Fisher’s brilliant tweet to those “fans” who said she had not aged very well.
~

People everywhere, especially women, applauded her response. I did.

However, the irony was not lost on me.

The claims that women have “let themselves go” have been around for a long time—much longer than social media. Women apologizing for letting themselves go is also commonplace. In fact, it’s so common that many of us don’t even realize it.

I was reminded of this a few months ago when my high school class celebrated its 20th reunion. Although I could not attend due to a family commitment, I nonetheless had a fun time looking at the pictures that were posted on a special Facebook page. Despite social media, I had not seen some of the attendees since graduation. It was fun to see how much some people had changed, but I noticed that more than one “apologized” for not looking the way they had back in the day and some even outright said they were “sorry for letting myself go.”

Every single comment along those lines came from a woman despite the fact that there were more than a few men in attendance who had gained considerable weight, lost their hair, or no longer resembled their former selves.

Although the above is hardly scientific, the truth is women are conditioned at a young age to stay as young and attractive as possible, as long as they can. In fact, “young” and “attractive” are used almost interchangeably. When a woman is told she “looks good for her age,” most of the time it means that she looks younger than she is. As a teenager, I purchased Annie Lennox’s hugely popular “Diva” album that had the song, “Keep Young and Beautiful.” The chorus was: “Keep young and beautiful/ It’s your duty to be beautiful/ That’s right girl/ Keep young beautiful/ If you want to be loved.”

While I was aware that Lennox was not being serious and rather, was making social commentary, I still didn’t quite “get” the bigger picture. Interestingly, at the time I was playing Lennox’s album non-stop, I was also reading the stories of F. Scott Fitzgerald in English class, including the tale “Winter Dreams” where at the end, both the reader and the hero, Dexter, learn that Dexter’s first love, Judy, has ended up unhappily married and, worse yet, has lost her once-glorious looks. Dexter is more upset upon learning that then he is about the former. As I recall, I too was more upset by the fact Judy was no longer pretty than the fact her husband did not love her. And I was identifying as a feminist even back then.

Like many, I didn’t think about aging when I was young. I knew, of course, that aging was inevitable for anyone who was fortunate enough not to die young, but I never could actually envision myself as older than my current age. Plus, I was in a rather fortunate position: While I never considered myself a ravishing beauty, I knew that many people found me attractive. However, I wasn’t so attractive that it was ever a possibility to make a living from looks the way that models and various celebrities do. Based on my friendships with women who had worked as professional models, I can say they tend to be more sensitive than most about the fear of aging and “letting themselves go” then most because their faces and bodies are literally their fortune.

However, as I moved closer to 40 and saw the emergence of those first grey hairs and fine lines on my forehead, that voice about the importance of not letting myself go appeared in my head.

Instead of ignoring it, I asked: “What does that mean?”

Namely, does it mean still caring about myself to make an effort or does it mean trying to still hold on to my youth as long as I can?

If it’s the former, then I am all for that. However, if it means the latter, then that isn’t just hard, but impossible.

The truth is, no matter how young I may look for my age, I am never going to be 20 again, nor would I want to be if I could.

After two kids, my body has changed. I may still be thin and in good physical shape, but it is not the body I had two decades ago.

As long as I continue to live and age, I will change and frankly, while I intend to take care myself because I want to stay around for as long as I can, I refuse to apologize if I am told I am letting myself go.

Sooner or later, the above happens to anyone who is fortunate enough to live a long life even if the only person who tells us that is ourselves when we look in the mirror..

While that may still be a while away, I hope I can remember the words of Carrie Fisher which prompted me to write this in the first place: My body is my brain bag, it hauls me around to those places & in front of faces where theres something to say or see (sic).

Amen. And hopefully, if my brain bag allows me to experience half the things Ms. Fisher’s has by the time I am 59, I will be one very happy individual regardless of how well or not well I have physically aged.
`