Say It Loud, Get It Out: How to Own Your Creative Identity. 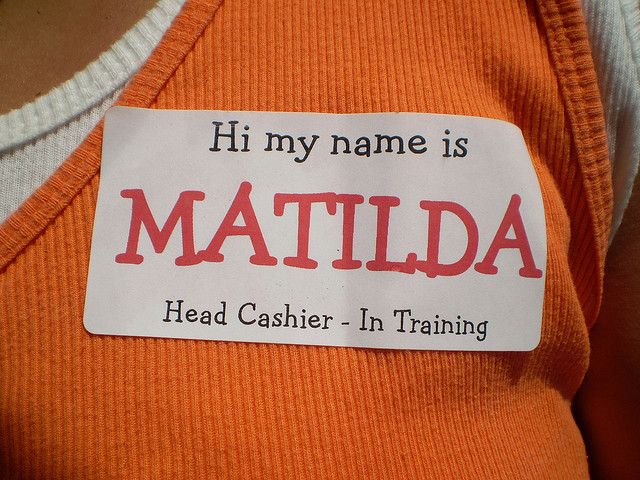 I was organizing an event for my day job recently when I stumbled upon an intriguing name tag.

One of the attendees (let’s call her Margaret Smith) listed herself as “Writer.” No fancy magazine name was propping her job title up in italics. There wasn’t a publishing house or dot com address affiliating her claim below.

“Now that’s interesting,” I mused. I wondered what she writes. How often? What medium? Is she some kind of novelist? Where does she write? At home? Does she have a little nook she sits in? I’ve always wanted a nook…

I had so many questions to ask this poor, unsuspecting stranger. I felt like a rescue dog waiting for her new owner to come home. I was afraid my greeting to her would be somewhat similar. “Where ya been?! Whatcha been doin’?! How goes the writing?! Got treats?!”

Her ambiguity was bold and outright. It stared you in the face unapologetically and made you want to know more. I went back to thumbing through the rest of the name tags. Business people from elite and empowering companies worldwide peered out from behind their laminated encasement. Every impressive name and title signified a mastery of success and achievement—and rightfully so. Scanning through the guest list I felt very proud of the hard work I’d put into organizing it.

Still, my mind drifted back to The Writer.

Once the night took on a life of its own (and I housed a few miniature pot pies in a dimly-lit corner), I decided it was time to find Margaret. If I had to guess, I’d probably get a B or B+ in the fine art of networking. I’m quick on my feet in most conversations, but when the subject matter veers toward the fate of the country, Nantucket or college athletics, I get uneasy. I strolled around the room, scanning people’s name tags and interjecting accordingly. After 20 or so minutes I finally found her.

“Margaret? Hi! I’m LeeMarie. I organized the event. You probably got a bunch of annoying e-mails from me.”

She laughed and introduced herself.

“Yes, I can recall a few. It’s very nice to meet you. What a great event!”

I thanked her for her compliment and for coming. And then, never known to be a person who waits for an intuitive transition, I dove right in.

“I have to be honest, I was looking for you. Ever since you registered and I saw you listed as ‘Writer,’ I’ve been wanting to pick your brain. Sorry, is that weird?” (I have a bad habit of apologizing for absolutely nothing.)

“Oh geez sure. Of course. What did you want to know?” she asked.

“Well, you say you’re a self-employed writer. Do you freelance? Or are you writing a novel? You have your own publication of some kind?” Off I spiraled like the love-starved puppy I was trying not to be.

I couldn’t really stop my eyes from widening. As hard as I try, I can rarely control how much I emote. I’d make a wonderful cartoon.

I was now all the more fascinated with Margaret. She was a woman who identified as a poet. She said it out loud. She let me print it in black and white ink and stick it into a laminated name tag. It was just as real to her as her lovely jade necklace and the glass of wine in her hand. And as much as she was empowered, she was a realist. That became more and more apparent as our conversation continued.

Margaret had a longstanding love/hate relationship with writing, as most of us who even begin to identify with it do. There’s nothing less empowering than calling yourself a writer and then calculating how long it’s been since you actually wrote. Or, even worse, staring at the ten hours of prose you just slaved over and wishing your laptop would implode and save you from yourself.

“I just admire the way you lead with it,” I said. “You just say you’re a writer. Period. Right out there. I mean…I write…but I’m an Executive Assistant.”

She said it in a “No Shit, Sherlock” kind of a way. Like regardless of our aspirations, writers will have day jobs until we run out of days. This was not the advice I wanted to hear. I have heavy dreams of cranking out memoirs from my hut in Bora Bora for the rest of my life.

Margaret went on to explain that she didn’t fully identify with herself as a writer until her children were grown. She actually laughed at the fact that I was having such an unfounded identity crisis at my age. I think in writer’s years, 32 is basically 23. Maybe you can even add them together, which would make me five.

I told her I also wasn’t sure why I have such an unshakable sense of failure when it comes to my creative process. I’m hoping it’s the hallmark of recreationally-imaginative minds. It feels like all my untold stories are fresh-cut grass tips decomposing back into mulch. I can’t quite get to them when they’re green.

I’ll spend an hour lying in bed at night, guilt-ridden over the fact that I haven’t written for two weeks. An hour I could’ve spent writing. It’s a very odd and selective form of paralysis. In the 30 minutes I spent scrolling through Instagram reading quotes about writing, I could’ve authored my own poem. I bet that’s what Margaret would do.

And as I embark on the semi-delusional voyage of becoming a travel writer, I find myself more self-critical than ever. Does anyone really care what I think about Guatemala? Probably not. Do people actually want to see photos of me without makeup on, taking selfies with monkeys in Costa Rican rainforests? Also unlikely. My mother cares. Some of my most loyal friends care. Travel & Leisure magazine definitely doesn’t care.

But, you know what? I care. I really freaking care.

I might not have the wisdom or the publishing credits of a well-seasoned writer, but I know caring is a good enough reason to try. Self-criticism and a looming sense of defeat are just proof you’re putting your neck out there. That goes with anything, really.

Guilt over not creating is just a symptom of ambition, fragmented as the bigger picture may currently be. And travel writing might be a fool’s paradise, but this little fool is still going to give it a whirl. I might be broke in paradise, but I’ll be there. I can write an article about the 10 Best Tips for Going into Debt in Foreign Countries.

The best advice Margaret gave me came toward the end of our conversation:

“If you feel like you can’t find peace unless you get it out, you’re a writer. Writers don’t have a choice but to get it out.”

“I feel sick sometimes,” I said. “Like my brain is full of rotting stories.”

“That’s a good thing,” she replied.

In the end, writers just write, right? We don’t need a name tag to prove it. We need to prove it to ourselves. We just need to get it out. Our creative big picture is composed of tiny little fragments evicted from our brains. We’ve displaced them and now they’re off dancing somewhere, twirling themselves into our written legacy; forming our second and most important identity.

Whatever the case, the blank page is always waiting for us. And it will never stop us from scribbling “Writer” on it in permanent ink and laminating it into reality.

For the Creative Souls who Hide Themselves. 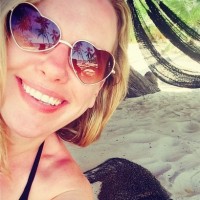