Saying Goodbye to Ghosts of Lovers Past. 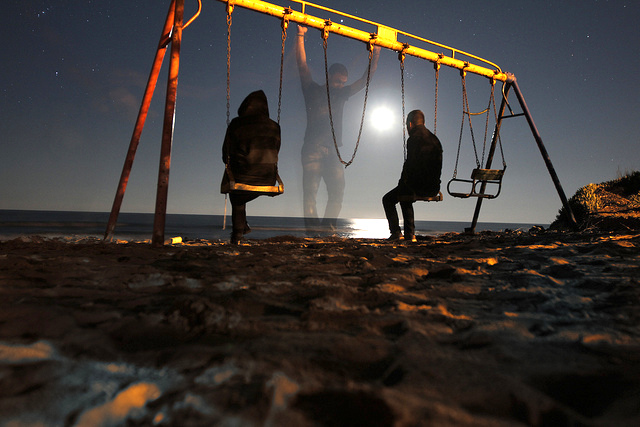 “Even if we never talk again after this day, please remember that I am forever changed by who you are and what you meant to me.” ~ Unknown

As the clock struck 12 and my friends around me erupted into cheers and leaned into the sweet kisses of their expectant lovers, I raised my glass of champagne and said goodbye to my past lover.

I realized as midnight dawned closer that when my lover said goodbye to me and my thanks to him for finally letting me go, I missed the most important part.

I missed my opportunity to say goodbye to him and his ghost, who still lingered on the outskirts of my memory.

For many of us, we accumulate a closet worth of past loves—because in the end, it’s a rare few who capture our heart long enough to actually become a significant part of our lives.

But what becomes of the others?

The ghosts of the maybes and possibilities—the loves who almost were, but in the end just couldn’t be.

If we don’t release ourselves from the memories of the ghosts of lovers past, then we will never be able to fully move into our present or future loves.

Or more importantly, moving into the place of more than just being single, but being truly available.

I realized that I enjoyed hanging onto this memory of him because it made me feel a little less alone, but most of all I hung onto it because I was afraid of letting go.

Because I realized that even in his absence, his ghost had become my fall back.

I believed that what we shared was the makings of the forever kind of love—until I grasped that no matter how much hope I had, the pieces were never meant to align.

Saying goodbye to our lovers and their ghosts are two different things.

That is why I made the choice to leave behind this particular man and his lingering ghost in 2015.

I have learned far too much to only need a ghost of a man as a fall back, but I also had to realize this in my own time as well.

When the moment was right, within the silence of my heart, I thanked him for his part in my journey and I released him.

I was also honest with myself about why I had kept his ghost around for as long as I did—and truthfully, it had very little to do with him, but more with me.

At one point, I was afraid of being alone—I wasn’t comfortable being single.

Because when we aren’t ready to face our own truth, it is much easier to drown in the deception and drama of another as a distraction.

Most importantly, I realized I just didn’t know how to say goodbye.

Goodbyes are something I’ve struggled with my entire life, because I am a forever kind of person.

I’m a ride or die kind of chick, if you will—and so leaving someone just doesn’t come naturally to me.

Whether it’s a friend or lover, when someone becomes important to me, they also become a part of me.

But, in the quiet days of contemplation that lay between Christmas and New Year’s, I realized that my natural instinct to never leave was the very thing preventing me from moving forward.

At one point, this man told me that if things ended, he would only smile because he had no regrets.

And now I understand just what those words mean—because I have finally arrived into my present with clear eyes and an open heart.

This man was an important part of my life and saying goodbye to his ghost doesn’t change this fact.

This man came into my life when I needed him to be the catalyst, moving me toward the woman who I need to be, and into the life the universe has in store for me.

The thing is, I cared about him so much that I refused to see him as being just one of the amazing people who are meant to come into our lives for a short period of time, just to shake things up.

“People come into our lives for a reason, a season or a lifetime.” ~ Michelle Ventor

Only when I became honest with myself—about why I always returned to him and about the kind of woman I really am, and what kind of life I want to lead—did it finally become easy to release his ghost, once and for all.

Because in all honesty, I wasn’t saying goodbye, I was finally moving on.

We had already said our goodbyes and exchanged casual pleasantries over the holidays, but now I was releasing him once and for all.

He won’t be a part of my future and more than likely, I may never see or talk to him again.

And I now understand that sometimes this is the way that it is meant to be, because not everyone is supposed to stay forever.

Just because we say goodbye to the ghosts of our past, doesn’t mean that it was any less meaningful or amazing than it felt at the time—it just means that we are growing, and with it comes change and separation.

I am not scared of being alone anymore, simply because I have faith that this was the right choice.

I don’t know what 2016 has in store for me and I may ring in the next New Year just as single as I was this one.

But the big difference is, my heart is now available and I’m ready for whatever may come.

Because I finally released my ghost of loves past.

And so now, there is no one left to haunt me.