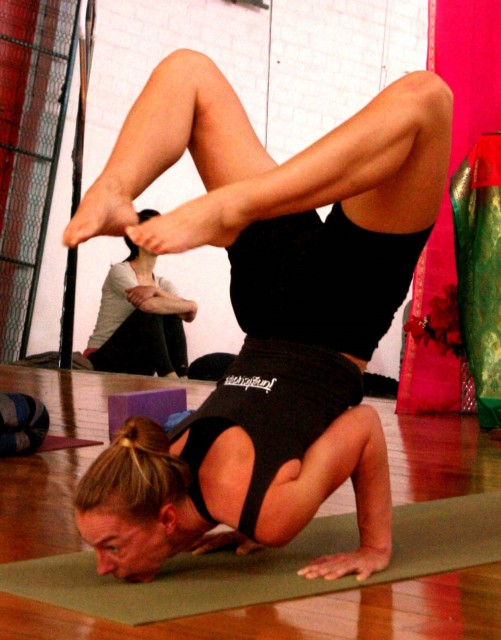 We all know that words can have several meanings. It’s much better to simply accept that than to try to define away ambiguities. Let’s face it, ambiguity is unavoidable.

I’ve spent decades teasing out ambiguities, bringing them front and center, highlighting words that mean much more than we normally think.

So it always comes as a shock when I discover that I’m confused by what someone means when they’re using a word that I know well. It’s a shock to discover that I’ve gotten hung up on a particular meaning of the word.

My friend (and teacher) Nina uses the word like that, but more acutely. She instructs students to use intention to execute a difficult transition or asana, like lifting into an inversion. She teaches that the intention is sometimes more important than the execution.

I never had any difficulty with these instructions, never thought about it much, until Nina’s workshop on intentions. In the lead-up to the workshop, I realized that there was some difference between what yoga teachers mean and what I had encountered in Western philosophy, but the details eluded me.

Knowing I would blog about the workshop, I checked the index of a couple of books for the term, but it wasn’t there. After the workshop, I asked Nina for the Sanskrit term. Sankalpa, she said. And everything began to take on different hues.

Georg Feuerstein, in The Yoga Tradition, informs us that it is a compound word, combining kalpa (vow) and san (connection to the highest truth). Sankalpa, is a vow or commitment to our highest truth. It refers to a statement that we draw upon to remind us of our true nature and to guide our choices. Looking in Feuerstein’s index for sankalpa, we find, “see conceptualization, volition.” These concepts (if I may) provide potent clues to making links between many different interpretations of intention.

Thus, setting an intention for our practice is vowing to seek a higher truth, to follow through on a noble aspiration. “Volition” refers to a choice, as well as determination.

When working toward challenging postures, there is aspiration and determination, if not a higher truth. “Conceptualization” and “visualization” are just as important here. See yourself doing the pose; envisage the reality, then manifest that reality.

One of the most important things to come out of the workshop discussion was that intentions can be goals that set us up for achievement, or they can be the kind of goals that occlude our vision, blocking us from seeing what’s true or real.

That’s what I want to talk about here—the role of intentions in constructing, and obstructing, reality.

Our perception is never total, never universal and never complete. It is limited, or selective—not necessarily intentionally limited—but always limited by our intentions. Goals and intentions can cloud our judgment, and our experience. This is shown in experiments such as the one in which family members posed as homeless people on the streets of New York.

The point of this experiment is that we always approach the world with plans, objectives, goals and desires—in short, with intentions. In the process, we filter out things that do not appear to be relevant for present purposes.

For example, I once caught myself rushing through the city, getting annoyed at people who were strolling along in front of me. It took some time and effort to re-frame what was going on, to recognize that “they” were not why I was annoyed. “They” were going about their own business, oblivious of me and my haste. With conscious effort, I learned to shift my intentions; I shifted from seeing “them” as obstacles in my way to recognizing them as people with their own lives and intentions.

A different example. Nina went to a child care center to pick up a two-year-old for his mother. When she arrived, he was engaged, playing with a toy. She interrupted and said “Hi.” He looked at her quizzically, processing. Then he recognized her. He said, “Nina,” putting a familiar label on the face/voice, and returned to his business. A moment later, when the child care worker appeared with his day-bag and handed it to Nina, everything shifted. He immediately got up, grabbed her hand and said “home.”

We might say that when she interrupted him, he had no intentions toward her. Besides a moment of cognitive dissonance (a familiar face out of context), her appearance had no effect on him. But the appearance of his bag in her hand changed his perception of reality, and thus changed everything.

Another philosopher, Cornelius Castoriadis, explains that our psychic engagement with the world is always a three-fold engagement. The psychic flux, he says, consists of representations, effects and intentions. It’s necessary to discuss these separately, but it’s also essential to remember that they are not separable; they occur together and influence each other.

When I was rushing through the city, intent on getting somewhere and doing something, the people who appeared to be obstructing me were represented as obstacles. I was adversely affected by these unnecessary hindrances; they were obstructing the satisfaction of my intentions. But by changing the way I represented them, I was able to diminish the effect. I didn’t achieve my objectives any faster, but I achieved them with much less stress.

In Nina’s case, because the young fellow had no intentions toward her, her appearance did not affect him. But when his day bag was added to the perceptual field, becoming a part of the representation, an intention was immediately introduced, as was an effect.

So, by all means, set an intention for your practice, your day, your life. But do it with mindfulness of its capacity to affect your reality.

The Power of your Intention.