Spoken like a true Spoiled Brat: I will Spoil my Kids and here’s Why. 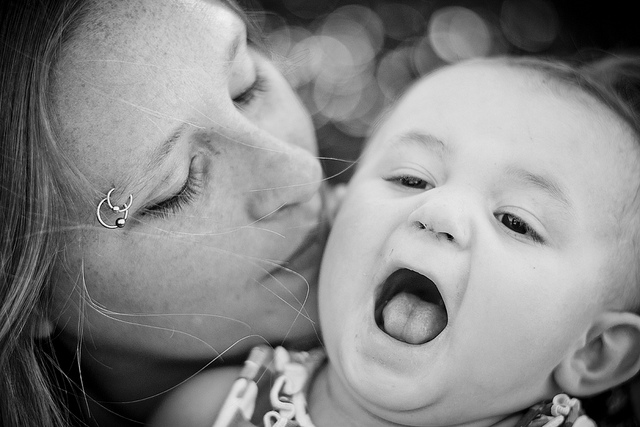 I have written about parenting without ego from the guise of practicing restraint when my ego wants to rear its ugly head at the advances of my very articulate, very willed pre-teen children.

I have not written about the egoic projections that other people, specifically other parents, put out as they unconsciously impart their value judgments on others.

When my daughter needs to eat, I nurse her. When she cries, I console her. When she’s tired, I excuse myself from social gatherings to tend to her sleep. We co-sleep, so each night her body rhythms are synchronistic with my own, and each morning, she awakens to a face with smiling eyes rather than an empty room.

I spoil my child. At least this is the value judgment placed on me pretty consistently.

Her physical body and emotional sensitivities are in charge of her whole life. Admittedly, they are also in charge of mine.

As I find myself entering my fifth month of being woken every few hours, as she gets frustrated at the breast in the middle of the night because she hasn’t organized her body yet to realize she is the one putting an obstacle (her hand) in front of my breast, I noticed myself pulling her arm away with a frustration I’d rather not let linger.

I have made a very marked decision to “spoil” my child and I am “suffering” the consequences of her spoiling.

I was a “spoiled” little brat. I got everything a kid could want. Toys, clothes, food, basically whatever I wanted.

I have a vivid memory of being four years old and seeing the car seats lined up against the hallway wall at my babysitter’s with babies bored and crying, unattended. I remember walking by them and whispering in my mind, “I love you. You’re ok. I would hold you but they won’t let me. I see you there. You’re not alone.”

Even then, I understood the value of something, I myself, wasn’t accustomed to—physical touch, autonomy, and trusting that if I had a need, that I could express it and it be met.

Needs were associated with weakness and wants with being ungrateful. Either way, I couldn’t win. I never knew what I needed only that I wanted something I just couldn’t put my finger on.

So I grew up hearing that I was a spoiled brat.

And, now I’m being warned I’m raising one.

I’m not writing this because my ego is tickled fancy at the opportunity for combat, nor to defend my stance. I am writing this because regardless of the assessments of others, I will continue to do what I do best. For layman’s sake, I write this to be the voice of my non-verbal yet very communicative five month old and every other “spoiled” baby growing right now. I write this as an invitation to all of those who judge us.

I will “spoil” my child and here’s why:

A child with a secure attachment to their parent has a home base. I, on the other hand worked my ass off in my adult years, cognitively, to fight my tendencies toward avoidant connections and ambivalence toward others. I worked to know what my daughter has been gifted each time I abide by her longings decades after she has learned what I hoped to know.

A child with a secure attachment feels confident to make moves from autonomy and self trust when they are offered a safety blanket in the world that they left a very safe, warm, womb to join. I will recreate that womb as closely as possible for as long as she needs a launch pad.

When children’s needs are met in the formative years of life, they do not grow up to be spoiled brats or materialistic twits. They grow up knowing that they, just like everyone else, deserve to have their most basic needs met, and they have an easier time asserting themselves to create them.

I’m talking the needs of fulfillment, the true value of love, and energetic boundaries.

I don’t spoil my children. I meet their needs.

I offer them safety rather than hurrying them up to prepare themselves for the dangers of this uncertain world I birthed them into.

Children are spoiled when their needs aren’t met from the get-go.

Even then, they aren’t spoiled at all. They are running around without resources, not knowing exactly what their needs are but hoping someone else will know for them and provide them.

These same people appear to never be satiated. Hence, “spoiled,” they want too much, and nothing is ever enough because they are longing for something they wouldn’t recognize if it fell on them and wouldn’t let in if it sliced them open.

True intimacy at its finest, is terrifying if one has never shared it. Even more terrifying if they hear its call to them but don’t know how to answer the phone.

The sharing of true intimacy, can begin at birth and for my children, is exactly what will happen.

Spoiled brats become brats when they have been withheld from in all of the ways they most long for—physical comfort, safety, someone listening to and honoring their social, physical, and emotional cues.

They are trying to make up for something they’ve never received and only know they want from the hidden parts of themselves. Parts, they’ll likely never get to hear because they are searching for their answer in the most superficial and loud of earthly ways.

It’s somewhat astounding to me that the world views the fulfillment of my daughter as if (someone else’s) fulfillment is taken away from them in some way.

Here’s what parents might want to contemplate. When we get out of bed every morning (or night) depending on which phase of parenting we are, we are blessed with the choice to discover ourselves through our children. I suspect most people who preach the “don’t spoil the child” verbiage feel deprived of the thing they don’t want to overindulge a child with.

What we do for our children we ultimately do for ourselves. In truly fulfilling them, we come closer to fulfillment.

Parent them from the place in your own innocent heart. The two year old in you that would’ve wanted a parent to hold you when you felt unsafe, to wipe your tears when you don’t understand and teach you instead of scold you. Parent them like their needs are important.

What you are teaching, you are actually learning: that everyone is allowed to get all of their needs met without having to prove themselves for it.

You deserve fulfillment, and so do they.