The Species that Die for Your Dinner. 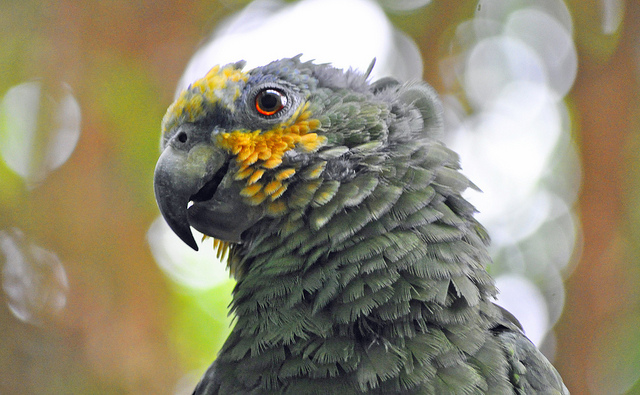 The biosphere is burgeoning with diverse species: pine trees and crocodiles, wolverines and algae, lotus flowers and blue whales.

Humans may dominate the planet, possessing the power to terminate species and bring new ones into existence. But packed tightly together, the mass of humanity is so slight as to fit within a mere cube stretched a mile in every direction.[1]

And yet, as long ago as 1846, Marx could write that there was no untouched nature left, “except perhaps on a few Australian coral islands of recent origin.”[2] The warming of the atmosphere, caused by the human release of global warming pollution, has since that time altered every ecosystem on the planet further and will continue to do so into the foreseeable future.

We are voracious little shrews, transforming the land and ecology of every place we inhabit. We have brought into the world today about a billion sheep, a billion pigs, 1.4 billion cattle, and 19 billion chickens. And we are responsible for their lives, for the lands they inhabit, the soils they degrade, and the pains they suffer.[3] For it is to the satisfaction of our wants and needs that they owe their existence.

The well-being of humanity is bound to the fates of billions upon billions of plants and animals. One massive study, carried out by ecological economists and published in the journal Nature in 1997 estimated the net value of the biosphere’s ecosystem services and natural capital—the fish, trees, minerals, land, water, and natural services, like water purification—to be about $33 trillion annually.[4] Whether or not this is a good estimate, the total value of all of the biosphere’s resources and services added together is inestimable. For without the biosphere there would be no one left to do the estimating.

Living beings hold not only economic but also intrinsic value. Intrinsic value only grows in the eyes of the beholder with the extent of his love. If we love the fish, the trees, and the land itself, their value can only grow in our estimation, for while they may carry some value that can be measured in dollars, they will also carry an intrinsic worth whose value is inestimable. And it may be the case that until we love all life, the living beings of the planet may occupy too slight a portion of our minds for us to even think to assign it an economic value.

A fellow feeling for non-human life can help us live more sustainably. For this sense of connection motivates us to concern ourselves with the fate of the life upon which we depend for our survival. The love for real sheep and cows, pandas and sea otters, redwoods and oak trees, brings to their protection an added sense of urgency. All of this is poignantly illustrated in the human relationship to livestock.

If humanity were to simply stop exploiting farm animals, we would save not only the animals themselves but also much of the land that is now required to sustain their lives. Depending on how high the quality of protein and metabolizable the energy content in their feed, it takes between four and 20 pounds of grain to produce a pound of beef. [5] Looked at another way, according to the U.S. Department of Agriculture, American livestock consume about seven times more grain than the entire U.S. population combined.[6]

This grain might instead sustainably feed 840 million vegetarians,[7] thus making the mass adoption of a meat-based diet not only an environmental scourge but also a sort of crime-against-humanity. For as less grain is produced globally, its price rises, thereby making it unaffordable for malnourished people everywhere. And while African markets may seldom be integrated enough into global markets for the price of grain to rise significantly today, we can expect this to change as African countries develop.

There is an environmental spillover effect to wasting all of this land on livestock as well. People who are well-fed are less likely to have multiple children who can feed them into old-age; so, wasting all of this land on livestock, and thereby raising the price of grain globally, plays a part in overpopulation. Well-fed people are also less likely to open up rainforests for cultivation; hence, the abundance of livestock plays a part in all of the carbon dioxide released in the burning of those forests, and all of the loss of rainforest species. The land that is required to sustain a meat-based diet is simply stunning. Looking beyond the United States to the planet as a whole, about a third of all arable land is devoted to growing food for livestock. And these same livestock require an additional quarter or so of the earth’s ice-free surface area for grazing.

This helps explain why the Brazilians are destroying their rainforests. According to the United Nations Framework Convention on Climate Change, subsistence farming is responsible for 48 percent, and commercial farming 32 percent, of deforestation respectively.[8] But while rainforests may often be cut down initially to provide land for agriculture, over 90 percent of the Amazonian lands that have been deforested since 1971 are now used for livestock pasture.[9] This deforestation has caused the extinction of tens of thousands of species, and according to the Intergovernmental Panel on Climate Change, it may be responsible for up to a third of the carbon dioxide emitted by human activity.

In all-too-many instances the choice is clear: livestock or living species. Meat is species-murder, and the consequences of our cravings will be with us for millions upon millions of years to come. If you want to end hunger, stop the destruction of rain forests, halt climate change, and save species, it may be time to consider going vegetarian.

This article is an adapted excerpt from Convergence: The Globalization of Mind

If you liked, please friend me on Facebook and join the conversation

7. David Pimentel. Sustainability of Meat-Based and Plant-Based Diets and Sustainability. The American Journal of Clinical Nutrition. 2003.

If a Species Falls in the Forest.