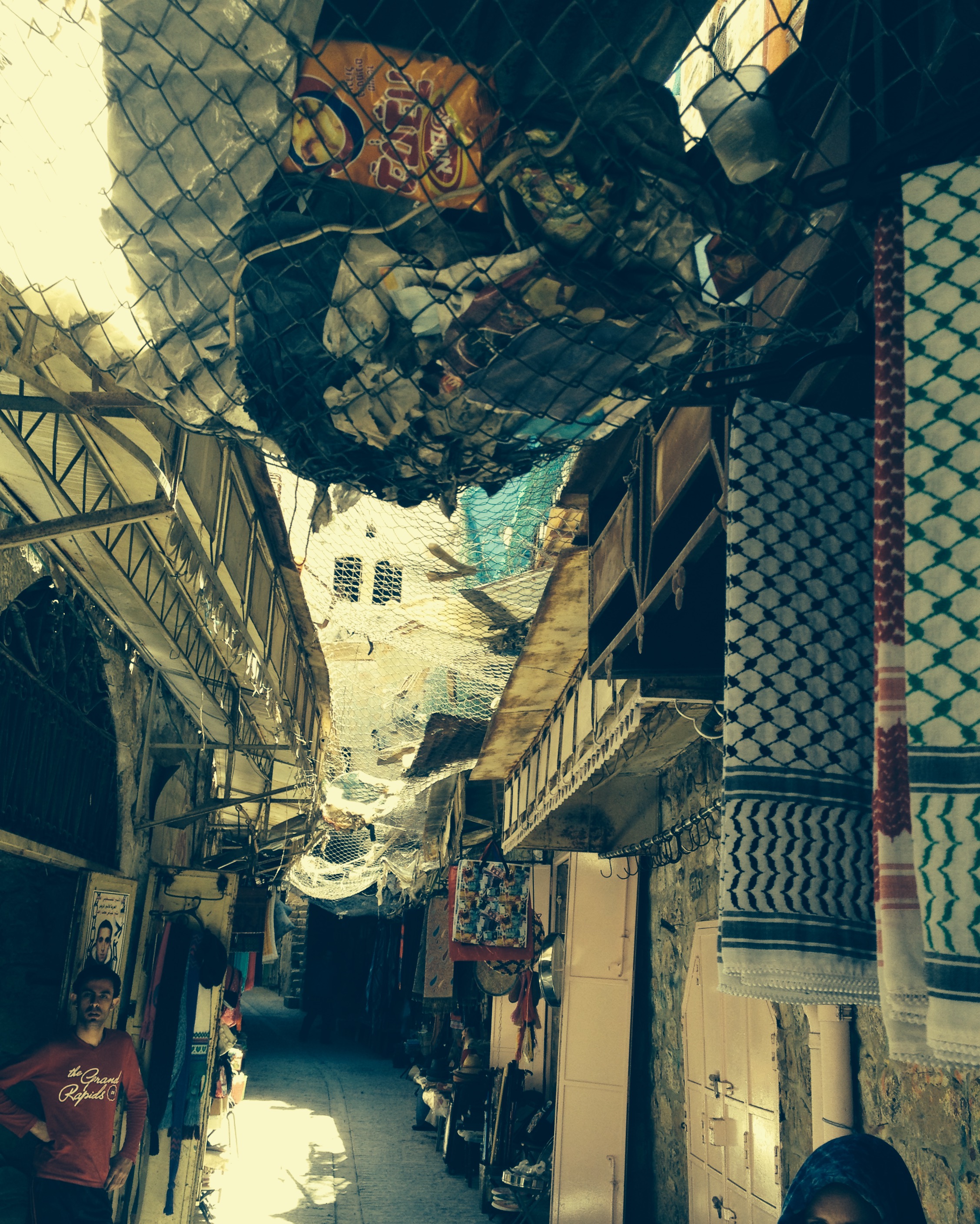 The donkey-cart was racing in circles through the streets of Hebron in front of Israeli soldiers, who were gathering for a fight.

Palestinian youths drew together just down the street, picking up numbers before beginning another ritualized act of stone-throwing. It was the summer before last and just outside the old marketplace of Hebron, perhaps the most fought over stretch of territory in the Palestinian West Bank.

Several hundred Israeli religious-extremists plunked a colony smack-dab-in-the-middle of the main Hebron market several decades back. International observers attest that the settlers regularly drop trash and liquids on the heads of Palestinian passersby from upper-level apartments. It got so bad shopkeepers had to cover the market with a mesh-wire fence that periodically fills with trash. The settlers are there to reclaim land taken from a few dozen Jews killed in a pogrom in the early-thirties and to fulfill a religious mission. And their presence has destroyed the marketplace and much of the life of this city of nearly a quarter-million.

An Israeli soldier stationed in Hebron told me the role of the Israeli Defense Forces there is to keep the peace between extremists on both sides. Ask Israeli soldiers and police in Palestinian territories what they are doing there and you will hear a similar refrain. But the abuses and humiliations of Palestinians regularly occur in Hebron, without intervention, as Israeli soldiers look on. There is even a guard tower in the middle of the market, where shopkeepers say the IDF does nothing to stop the settlers. Countless videos of young Palestinian schoolchildren being stoned by settlers, as international aid workers escort them to school, tell a similar story.

The soldier spoke of his job proudly, amid my gentle fusillade of questions. Why defend these fanatics who only cause trouble for your state? Why spend hour-after-hour, day-after-day, in the hot sun, in order to defend an occupation that is inherently unjust? Why not travel and see the world or help people who really need it? His answers reminded me of corporate employees who go to outrageous lengths to defend the injustices of their employers; his trembling handshake betrayed an inner lack of confidence.

There was good reason for the stone-throwing boys to want to run the soldiers out. The Israelis were the occupying power and had just begun an incursion into the city. Soldiers can easily protect themselves from stone-throwers but periodically shoot to kill. Throwing stones can be dangerous business and it must take incredible courage and commitment to daily play Palestinian David to the Israeli Goliath. As if to highlight the dangers, my good friend and guide to the action, who was from a nearby village, had actually been shot in a nonviolent verbal encounter with settlers in his youth.

And yet, it all seemed so casual and routine. A Palestinian fruit-seller, who was quickly packing his goods, had even set up shop in the middle of the melee. The donkey-cart taunts and the blind-massing of soldiers made the stone-throwing appear less an act of just retribution and more just a ritualized dance of trauma.

The occupation of Palestinian territories compounds the collective traumas inflicted on Palestinians and Israelis alike. Military occupations are inherently violent, and violence can be magnetizing. The presence of the settlers in Hebron was wholly unnecessary, as were their soldier-protectors. But the stone-throwers also seemed to be doing little good. And if my friend was correct, local Palestinians did not hold them in the same high-esteem as international activists do.

The addiction to the adrenaline of danger, the ritualized re-enactment of mutually-assured-destruction, the hypnotic draw of action are all intensified in trauma-fields. The urge to obliterate oneself, the inability to step-back and assess, and role reversals between victims, perpetrators, and observers are also intensified. The sense of connectivity and immersion in the moment can be highly addictive. And perhaps these experiences are triggered in some special way by the infusion of religiosity, which deepens communal bonds and permeates the land. Through religion the whole world has been drawn into Israel and Palestine.

Watching such ritualized re-enactments of trauma can be like staring into a whirlpool. The violence is exciting and mesmerizing. Observers tend to tack back-and-forth between being pulled-in and wanting to run. The trauma specialist, Peter Levine, recommends that both urges should be resisted. He argues instead for standing in the middle of the trauma and letting it wash over your feet. But the sense of being caught up in a great historical struggle can be energizing. We stand in solidarity with the stone-throwers, hearts pounding and adrenaline coursing through our veins, neglecting more elegant solutions. The problem with violence is that it tends to provoke more violence.

It has become almost a cliché in some Palestinian circles to say they are waiting for their Gandhi. However justified the violent resistance to occupation may be, the world might run to someone who could reason through the issues, without denying the injustices and the suffering on both sides, and yet speak directly to the criminality inherent in the Israeli occupation.

I tried to stand in the middle and see all sides while exposing the inherent injustice of the occupation. I believed decades of meditation and years of studying genocide and ethnic cleansing would immunize me to addictive traumatic re-enactments. But just a few weeks of it drew me into making a wreck of my life. Another year-and-a-half of activism suffused my life with anxiety. I watched as activist colleagues became increasingly extreme in their views and members of the movement fell out among themselves. Everyone seemed to be on their own wild-donkey rides and spinning out of control.

These reflections lay dormant in my mind while waiting to catch a glimpse of the stone-throwing. An observer of victims-taunting-perpetrators, I became part of this dance, like you the reader and the news reporters to whom you listen. Stone-throwers, soldiers, activists, readers, writers, and escapists are all part of this dance. We are all grappling with how to respond to collective trauma and injustice from which it springs. The wrong reactions can breed more conflict, more injustice, and more trauma in an endless cycle of suffering. It is time we learn to view it all from a more mature vantage and break cycle once-and-for-all.

If you liked this article please friend me on Facebook and join the conversation.