What I Learned About Authenticity From Tasha Tudor. 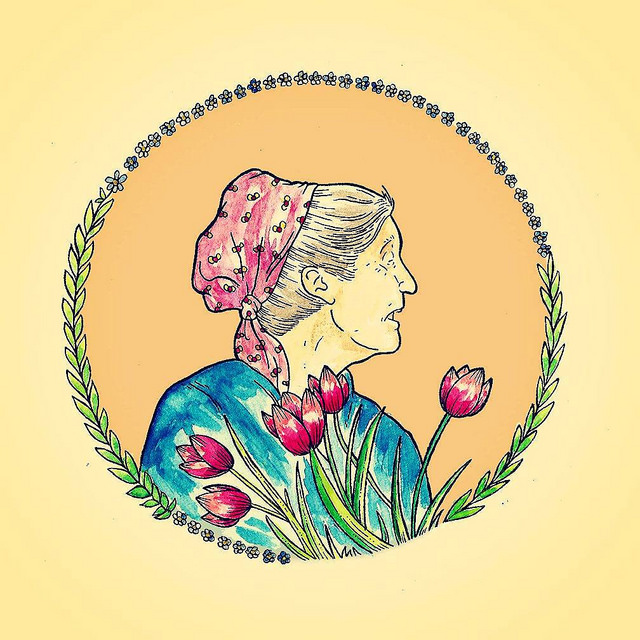 The first time I saw an image of Tasha Tudor, I thought I was looking at someone living in a previous century.

Tasha, named Starling Burgess at birth in 1915, was a New England illustrator and writer. She died in 2008, a woman who had dared to live authentically in the face of changing times.

I am forever on a quest to live as close to my soul’s calling, but Ms. Tudor has shown me that I can do more.

Sterling was re-christened Natasha shortly after her birth as her father, for whom she was named initially, was a great fan of the character Natasha in the book War and Peace. Tudor was Tasha’s mother’s maiden name and after her second divorce, Tasha took that as her legal surname.

Tasha illustrated nearly one hundred books over her career, spanning from 1938 to 2003, some of which I have in my library from when my own girls were little.

That first image I saw of Tasha was of her standing in a field, wearing a dress that one might have worn in the 1800s, looking as composed and happy as anyone could be.

I was intrigued by this woman whose artist’s heart was brave to live in the century of her choice, in a house built for her by son Seth, in the hills of Vermont. Pictures of Tasha at home reveal her painting by candlelight, kept warm by a roaring fire, tending goats and chickens in the midst of a garden that I am in desperate awe of.

Now it’s one thing to dress up once in a while in garments that intrigue us, or to cook the odd supper by candlelight. It’s another thing to so love a previous century that one feels compelled to adopt its lifestyle.

I have lived in a cabin without insulation, running water, or indoor toilet once—for one year. I have also cooked by candlelight, warmed our house with firewood, cook in cast iron pots, had goats and chickens…but never have had the courage to indulge my longing for pioneering full-time.

I have had a garden that pleased me, but what Tasha accomplished with her garden is nothing short of miraculous. I think she had the garden divas in her back pocket and wound around her finger. Her art work reflects her love for nature. Her dogged adherence to her soul’s call is truly inspiring to me.

Here is a moment in time when I have slipped completely into my skin as a solitary witch, in my garden. It remains one of my favorite photographs of myself because how I see myself in my heart is how I appear in life. I wish for everyone to have at least one such photo, as a reminder of inner truth. 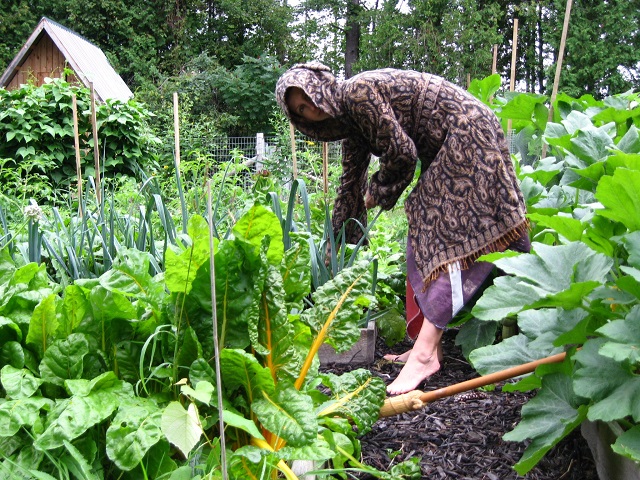 Another thing I love about Tasha is the wisdom of her words. She had no qualms about speaking her mind. She spoke as she lived, revealing her being’s true purpose. I often re-read quotes by Tasha that inspire me to speak plainly and with honesty.

Here are a few of her quotes found in some magazine pages that a friend gifted me. They are yellowed now, but I keep them in my writing room and often look at them when I need reminding that to be authentic is as important as it is to be alive.

“When I am alone I can be completely myself. I can tell the cats what’s on my mind, and when they are recalcitrant, I can tell the goats exactly what I think of them and no one can hear me. I enjoy solitude. It’s probably selfish, but why bother about it…Life isn’t long enough to do all you could accomplish. And what a privilege to even be alive. In spite of all the pollutions and horrors, how beautiful this world is. Supposing you only saw the stars once very year. Think what you would think. The wonder of it!”

“When I am working on the barn or house I often think of all the errors I’ve made in my life. But then I quickly put that behind me and think of water lilies. They will always eradicate unpleasant thoughts. Or gosling as equally comforting in their own way… Sometimes when I’ve been throwing hay around, it smells like summer in the barn, and the sun comes through the windows and the cracks in the boards and makes shafts of light in the dusty air. But I never long for summer in winter. What is that lovely quote from Shakespeare—‘At Christmas I no more desire a rose/Than wish a snow in May’s newfangled mirth.’ That’s the idea. For everything there is a season.”

“Candles are flattering to an old face. I’ve always used them, and kerosene lamps…everyone says my house is dark, but people don’t realize how dark old houses were. I love it dark. It’s like a nice chipmunk’s nest…I’m perfectly content. I have no other desires than to live right here with my dogs and my goats and my birds. I think I’ve done a good job of life, but I have no message to give to anyone. If I do have a philosophy, it is best expressed by Henry David Thoreau: ‘If one advances confidently in the direction of his dreams, and endeavors to live the life which he has imagined, he will meet with a success unexpected in common hours.’ That is my credo. It is absolutely true. It is my whole life summed up.”

I, too, wish to one day sum up my life by this philosophy.

To live simply, love wholly, work as inspired by my soul: this will have made all my dreams come true.

Tasha Tudor is an example of what it means to reveal myself to the world as none other but who I am at my core.