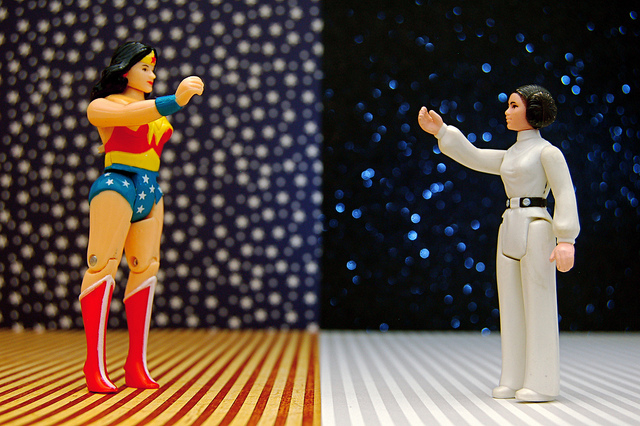 I sat in the darkened theatre, mesmerized by the woman on the screen.

She ran, held a blaster and spoke like a regular person, but she was a princess, and she was leading a rebellion.

She was leading a rebellion.

I was in awe of her. She was like no female character I had ever known—a woman of principle, a woman of power and strength and beauty. For three movies and six years, I had a role model I could relate to. I had a woman to look up to. I had a hero.

I was lucky enough to be quite young when I first met her—seven years old and open to the influence she could have over my rapidly developing sense of self.

After Jedi, she faded from my life, but I never forgot her. She was always in the background, reminding me to fight, reminding me to be more, do more, than expected. She reminded me that I could be anyone I wanted.

Princess Leia made it okay to talk back to the dark forces trying to rule my universe.

I was beyond excited to find out that in episode seven, she had become a General. She was leading a new resistance. My hero was coming back big time. In the first 10 days of the film’s release, I saw it five times. This movie gave me everything I needed from the old characters and more than I could have expected from the new ones.

In the best and most wonderful way, I was a kid again.

It was therefore quite disheartening, though not at all surprising to read about what is going on surrounding Carrie Fisher’s looks.

The criticism General Organa is getting for looking old has unfortunately tainted what should really be an amazing time in the Star Wars saga. It is ludicrous. This is a character who has been a war general, has lost her son to the dark side, lost her scoundrel to the thug life, yet somehow, she is expected to look like not a day has passed since she donned that ridiculous metal slave bikini?

I understand that this all happened a long time ago in a galaxy far, far away, but I live circa now, and I am becoming impatient.

I am impatient that women can only be valuable if they are sexualized.

I am impatient that for some reason, we as a society are still blind to the fact that we put unrealistic expectations on both men and women, and that it does nothing but hold us all back.

I am impatient that any small step forward that any of the marginalized make is always accompanied by at least two steps backward. I grow more impatient every time I have to explain this reality to a person who has never had to experience it. I grew up with Leia, and I expect more of the audience that received that gift. I expect more of all of us.

As Yoda instructed Luke in Empire:

“Luminous beings are we, not this crude matter.”

Leia, be she a princess or a general, will always be luminous. Her strength, her compassion, her will are what make her special.  Her character, her spark and her brash intelligence are worthy of worship for these are things she cultivated. These attributes show her true strength, her true beauty. Her appearance is random. It is inconsequential.

How well she fits into a metal bikini is quite beside the point, and watching as the actor being judged for this is painful. It is embarrassing.

In the end, Star Wars is about good and evil, light and dark, right and wrong. The Dark Side and The Light Side are clearly delineated and it is also clear that fear and suffering lead to the dark side.

These lessons are finite. Han Solo even gets it.

I am still waiting for the real world to catch up. I am waiting for people to be acknowledged and appreciated for what is within. I am waiting for a world which is void of people reacting like unruly children to every little disappointment they experience in their lives—like when the girl they fell in love with as a child has grown into an older woman.

Until we can understand and accept aging in men and women, until we can accept the light and the dark, this is the world we will live in.

This is the cage we are building for ourselves.

We will let our fear of aging get in our way. We will let it scare us so much that we will continue to marginalize old people.

Even when they are generals, leading a brave resistance against The Dark Side.

Yeah…that is as stupid as it sounds. And we should all be ashamed.

The Discrimination No One Talks About, Even Now.