A Karmic Antidote to the Law of Attraction. 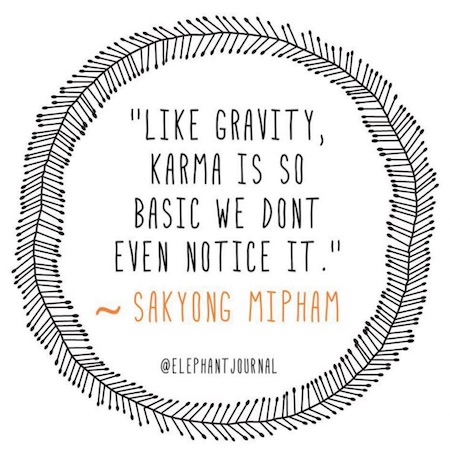 “The best way to find yourself is to lose yourself in the service of others.” ~ Mahatma Gandhi

The concept of karma originated in India, but has migrated across the world.

As it’s done so, it’s adopted differing definitions and understandings according to Hinduism, Buddhism and Jainism, as well as other Indian and New Age traditions.

Some consider karma to be linked to past lives and rebirth, some do not, believing it to be limited to a single lifetime.

Others consider karma to be the sole province of the Divine. To use an analogy, the flower’s lovely colour and scent and ability to attract the butterfly originate from the Universal Tree, or Source, of life not the flower itself. Therefore the flower and the fruit of its actions are surrendered to the tree of life rather than claimed as its own.

To take the analogy further, the flower does not have an individual soul but itself is a unique expression of the single soul of the tree of life.

When the flower eventually dies, its energetic essence is recycled through the fruit it produces and passes along the food chain. Its eventual re-absorption through the earth and assimilation by the tree of life once more, in the form of elements and nutrients, completes, or rather continues, the cycle.

The next generation of flowers sometimes have memories of previous incarnations, but it is not the flower that has been reborn, but rather the universal energetic essence—Shakti energy—that is continually being recycled, and reborn.

This analogy fits well with the great grandfather of Indian philosophy, Advaita, meaning not two.

The profound significance of oneness can easily be missed.

Yoga philosophy also inclines towards this interpretation. The word yoga, meaning union, tells us this.

The flower (the self) is already in union with the Tree (the Self). When the awakened flower realises this, it surrenders its sense of self—what is commonly called the ego—and Self Realisation occurs. In recognising the origin of karma, the ego relinquishes its grip on the illusion of ownership—I, me and mine.

The Buddha had something fascinating to say on the subject,

“The doctrine of karma is undeniable, like everything else in nature we are subject to the law of cause and effect. But there is no evidence for an immutable self which remains the same and migrates from body to body. There is no transmigration of the soul.”

It is clear why the Buddha was considered quite the radical in his time, and was subject to several assassination attempts for upsetting the status quo.

Hindus for the most part rejected the Buddha’s teaching but a significant minority that recognised the merits of being free from the cycle of rebirth and suffering embraced this new doctrine and converted to following the Dharma—what we now commonly refer to as Buddhism.

As the Buddha states, the fundamental principle of karma is unquestionable: every action is preceded by a cause and proceeded by an effect. However, intriguing questions arise when other patterns are superimposed upon this basic principle.

For example, the belief that good actions produce good karma and bad actions bring about bad karma. This a popular idea in India and increasingly around the world. In this regard it is similar to the Law of Attraction.

Those that subscribe to this definition of karma live their lives on a mission to accumulate good karmic points with the belief they will be rewarded with good fortune or perhaps even earn a better life next time around.

In this system, a kind of Cosmic Bank or perhaps God, the Cosmic Banker, keeps tally of our credits and debits.

The phrases, “reap what you sow” and, “what goes around comes around,” have become synonymous mantras to describe this idea.

However, the skeptics point out the faults in this interpretation of karma. Why do innocent children suffer then, how can they be reaping what they have sown? Why are the likes of Martin Luther King Jnr and Jesus, teachers of love and peace, murdered in their prime, while a man like Joseph Stalin dies of a stroke in his own bed at the age of 74, with the blood of millions on his hands?

The suffering of the Tibetan people, among the most peaceful people on Earth, is another cause for doubt. According to Tibetan tradition the Dalai Lama is the descendent of the reincarnated soul of the 73 Lamas that came before him. But what possible crime could he be atoning for to warrant the invasion and occupation of his country, the murder of his friends and his subsequent enforced exile?

Similar arguments could be made for the subjugated indigenous peoples around the world, be it in the Americas, Australia or New Zealand. What of the Atlantic slave trade, the Holocaust of the Second World War, the ethnic cleansing in the Balkans, the genocide in Rwanda, the terrorist attacks in London, Paris, New York? What terrible crimes could these casualties of karma have committed to warrant such brutal punishment?

What law of attraction could possibly account for such uncompromising penalty?

The defenders of this old paradigm might reply, “They are all atoning for bad karma in this or a past life.” Or perhaps more disturbingly, “They attracted it.”

Mahatma Gandhi, who himself was shot and murdered by a fellow Hindu, would have responded, “An eye for an eye only ends up making the whole world blind.”

I must concur with the great soul, Gandhi. The old, alternate model of karmic crime and punishment, risk and reward, is a never ending cycle of suffering.

There must be other interpretations of karma that do not submit to this pain and gain paradigm.

Before Hinduism, before Buddhism, before the Law of Attraction was the great Indian philosophical work, The Bhagavad Gita. It has some astonishingly beautiful things to say about karma. Here is an alternate paradigm:

“Without concern for the fruits of your action,
perform the necessary action,
surrendering all attachments,
accomplish life’s highest good.”

Sublime. What strikes me about this verse from the third chapter of The Gita, The Yoga of Action, is how its motivation is so pure and selfless.

There are no bargains being struck with God here, no haggling with the universe, no accumulation on one’s cosmic credit card.

The message is simple and clear. The flower surrenders itself and the fruits of action to the tree. It is no surprise that The Gita was Gandhi’s favourite spiritual book, and over the years it has also become mine.

Because of our deeply ingrained social structures it is all too easy to perceive even our spirituality as a commercial enterprise, trading this thing for that, bargaining with the universe, bartering with the Divine—our compliance for reward.

Doing the right thing is its own reward. What happens after that is not karmic free-trade but rather trade-free karma, a selfless exchange. Only then can the karmic credit crunch and its supporting samskaras be expunged. No more debt, in this lifetime or the next.

Of course spirituality as a commercial enterprise has always existed. It is inevitable and in some ways necessary, and making karma a trade will keep the sages in business for millennia to come.

But “life’s highest good,” as The Gita calls it, is beyond commerce, beyond karmic crediting and debiting. It is direct and free, and that, I believe, is the essential meaning of Unconditional Love.

Who We Really Are: A Karmic Perspective.