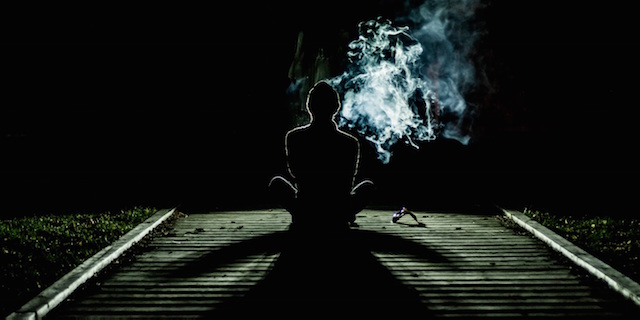 At the base of all of these partial explanations is an existential fear: the fear of hearing the voices in our head; the fear of acknowledging that we’re all alone in the universe, and we’re going to die; the fear of an empty and meaningless existence; the fear of not being able to make it meaningful on our own.

They instinctively know that if they stare into this abyss of meaninglessness, they’ll be confronted by their own emptiness. They’ll have to experience it, and deal with it.

“If you gaze long into the abyss the abyss also gazes into you.”

On the surface, the quote appears to be cautioning us against looking into the darkness of the abyss. But why not? What does “the abyss gazes into you” mean? On closer inspection, it seems to be reiterating the preceding line:

“Whoever fights with monsters should see to it that he does not become a monster in the process.”

That’s not ambiguous. It does not suggest that we should not fight monsters, so we can probably assume that we are not being cautioned against gazing into the abyss, either.

My understanding is that the abyss refers to meaninglessness—to nothingness. Nietzsche was no fan of nihilists, those who believe in nothing and embrace nothingness. So perhaps being consumed by nothingness, by the abyss, was one of the many monsters that concerned him.* Sharing his rejection of nihilism, I think we must nevertheless take a long hard look into the abyss, and accept that nothingness is an inescapable part of the human condition.

Another philosopher, Martin Heidegger (1889–1976), writing after Nietzsche, observed that Western culture has “turned away from death.” In fact, he says, we spend most of our lives running away from the fact that we are going to die.

In a sense, this is what the Buddha was alerting us to in the first noble truth: we are all going to die (or was that Lenny Bruce?) and we will all experience suffering along the way.

Heidegger’s point is that we are not living fully if we are wholly devoted to turning away from the facts of our death. He began writing about this in the 1920s and 30s, describing a culture that was fixated on material consumer goods, on the hedonism of good food and drink, on the institutionalization of government, medicine and so on. In short, he was describing a severe social malady in its advanced stages.

Think of how many more forms of communication, entertainment and distractions we have available to us today—how much more our social dis-ease has “advanced”.

Think of how the sick and dying are typically sequestered away in hospitals and hospices, ostensibly for their own well-being, but also to get them out of sight so that we are not confronted by them in our everyday lives. The dead are stored in hermetically sealed vaults in the morgue or mortuary, until they have been sanitized, dressed and made up in preparation for public viewing, so that on those occasions when we must gaze upon them, we don’t have to see their decay—the fate that awaits us all.

Death, dying and the dead are only a small part of what Nietzsche meant by the abyss, though. Heidegger’s discussion of a culture that is turned away from death doesn’t go far enough. Arguably, this is because unlike Nietzsche, Heidegger was a religious man, and through his religion he was prepared to face up to death and dying, even while he continued to cover over the abyss.

Much more than the fact of dying, the abyss refers to the meaninglessness of being.

The Greek philosopher Cornelius Castoriadis (1922–1997) argues that the primary function of religion is to hide the abyss from us, covering it over with comforting stories of divine plans and afterlives, god-given meanings and reasons for being. These stories make our lives much simpler; they make our duty clear: we must only identify God’s reasons and live accordingly.

For Castoriadis, all of these stories are ways of covering over the abyss, so that we need not stare into it. They are no different than the modern consumer chasing after meaning (or “happiness”) in a bigger house, a new car, a flat screen television, more movies, more sex, more drugs, more more more of everything. Except peace and quiet.

It is not merely death that our culture struggles to accept. We have created a society that is hell-bent on running away from the abyss, the nothingness, refusing to face the fact that it is all-encompassing.

Look over here, look at me, look away.

But only for a moment.

We cannot outrun it. We cannot paper over it. It is the monster under the bed, the voices in the head, the shadows lurking everywhere, bubbling up and spilling over, creeping into the momentary silences that punctuate the chatter. It will not give us peace until we turn to it, face up to it and stare it down.

We must gaze long into the abyss to accept its ubiquity. It will threaten to consume us, yet we have no hope of overcoming it until we accept it for what it is.

I want to leave it there, but my dear proofreader insists that I leave you with something more concrete to work with.

Meditation is a technique for peeling away the veils and staring into the abyss.* It is a technique that aims to put aside our numerous distractions, to become witness to our countless ways of distracting ourselves, to recognize our unlimited capacity for running away from the silence. With practice we can learn to sit still in the face of the abyss.

*As these things go, the day after I wrote the first draft of this paper was Maha Shivaratri—a celebration of Shiva as the Destroyer of Nothingness. On the surface this seems to be a similar idea, but maybe the opposite of what I’m arguing here. I don’t know enough about it to say so with any certainty and am going to have to leave that discussion for another piece, to give me a chance to look into it a bit further.

*This is perhaps the most important difference between a meditation practice and the newly corporatized and commercialized “mindfulness” trend. Mindfulness can be used to learn to focus on anything—to still the chatter of the mind, settle the fluctuations of the mind, slow the beating of the heart, and fully focus on whatever is in your cross-hairs so your aim is true when you squeeze the trigger. Meditation goes much further toward recognizing the ultimate state of being. It’s of little use to the corporate masters, as it might prompt you to ask questions about what happens when you squeeze that trigger—questions about the true costs, about who benefits, and who pays the price. But that’s a topic for another time.