Never Say Never: What it’s Like to Move into the Ex-Wife’s House. 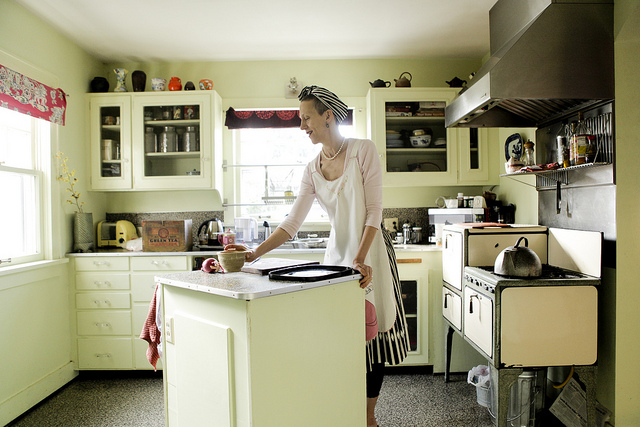 It only took about a month for D and I to begin talking about moving in together.

In those early days of our love, the thought of even one day apart was more than either one of us could bear and so we started looking at options.

I had recently moved into a two bedroom 400 square foot cottage (think the size of a two-car garage). It was clearly too small for two people to live in 24/7, especially if one of those people was over six feet tall and his knees hit the bathtub when he sat on that thing people sit on in bathrooms.

When it came to cooking—well, let’s just say there was room for two people—if one of them just stood by the refrigerator and watched.

After months of looking at entirely unacceptable options he finally asked me,

“Would you consider moving into my house?”

Of course, the house he was talking about wasn’t really “his” house. It was his and his former wife’s house, the one in which they had lived for 18 years, in which all of her clothes still hung in the closets and all of her dishes were still stacked in the cupboards and all of her books were still (double rowed) on the bookcases.

No. I would never consider moving into “his” house.

What’s that they say about never saying never?

“David, I really can’t believe how much we have changed this house. I just love it here,” I said to him as I came ’round the corner into the living room recently.

The housekeepers had just left. Everything was shining and gleaming and clean.

Before we moved in we had taken out walls, raised ceilings, improved the air conditioning, installed a staging kitchen, pulled up the wall to wall carpet, entirely redesigned the back yard, and even added a claw foot soaking tub in the master bathroom.

He had come home from a walk one morning soon after we met when I was inside packing up and sorting through what was left of his wife’s closets only to find me redesigning the house in my head.

He didn’t say no to a single thing that I asked for or to a single idea I had for renovation. He only said he wouldn’t expect a woman to live in a house with the belongings and tastes of another woman, especially if that other woman was the first wife.

Now, I look at my house—the house that embraces me when I walk into its arms and that feels so alive to me that I want to say goodbye to it when I leave and hello to it when I return; the house that no matter where I look, it pleases my eye and satisfies my senses; the house that had been a container for an old love and that is now the container for a new one; that has witnessed many kinds of births, to include even the kind of birth that only death can bring—and I recognize it for the love gift that it was.

“Would you consider moving into my house?”

When D and I went on our first date, he walked me up to my door and said, “Where do we go from here?” I said, “Well, I thought you’d come in and we’d get naked together,” and he walked into that little 400 foot cottage and—as he later told me—fell in love with what he saw and by extension, fell in love with me.

Several years ago, when I went to San Francisco to study Feng Shui the teacher said:

I looked around at my house tonight, the one I have been so happy to live in for the past three years and I feel happy. I feel happy that I was able to shape it and mold this space into my own. I also feel happy for another thing—that I was able to get past my “never” and move into my husband’s house, the house where he and his wife had lived and in which she had died.

He has told me many times, being able to live his new life here has been a great comfort to him and allowed him to feel as if he was able to bring his two lives together in a seamless way.

In the meantime, I have fallen in love with this space, and hope I “never” leave it.