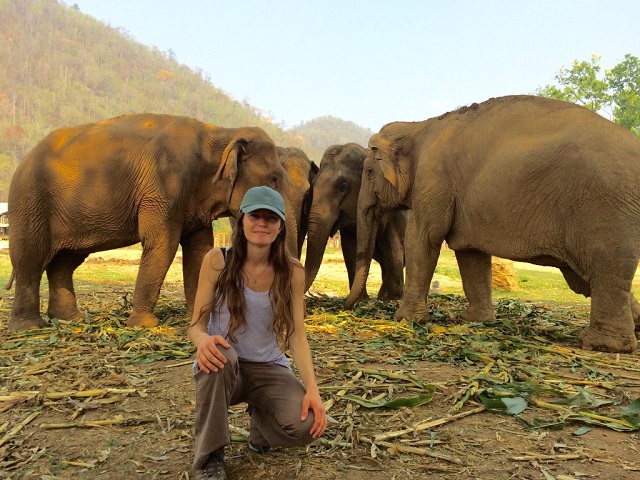 As a kid, elephants intrigued me: massive and almost mythical, relatives of the ancient woolly mammoth.

Later I came to see them as powerful beings embodying strength and wisdom. They seem knowing.

In yoga, I learned about Ganesha (Ganesh), the Hindu elephant-headed god—Lord of Good Fortune and Remover of Obstacles.

Elephants are endearing. I love their wrinkles and bristly hair, their cushy-looking feet and rope-like tails, the way they sort of bob up and down while slightly swaying side to side as they walk. Their long eyelashes seem to cast a subtle sleepiness on the world.

There is a peacefulness about them.

Elephant families form some of the strongest bonds in the animal kingdom. Female elephants sometimes act as nannies to help mothers look after their young. When a death occurs, they display a mourning ritual: touching the body gently with their trunks, covering it with dirt and leaves, staying with the deceased for days or revisiting the site.

Elephants are fascinating and many travelers that head to Asia dream of going on an elephant trek. They want to be up close to these magnificent beings in the jungle. This may be an exotic and unique experience, but most tourists don’t know what’s behind the scenes of the trekking industry.

Undernourished and overworked, they are forced to give rides throughout the day. When they’re not working, they’re usually chained. At some establishments, sharp bull hooks are used to control them when they’re out of sight from tourists.

Despite their great size and strength, an elephant’s structure is not built for riding. The weight of humans in heavy saddle boxes can be damaging to the elephant’s curved spine. The pads of their feet get worn down, causing debilitating foot issues over time, such as arthritis.

Then there is the act of Phajaan, which means “crushing” or “breaking” of the sprit. When young elephants are taken from the wild for tourism, they are confined alone in a pen with their limbs tied, then starved and beaten with poles or hooks to make them submissive to human control. This process is so violent that many babies die from it. The tourism industry is directly threatening the Asian elephant population.

Gratefully, I never rode an elephant. I knew about the reality of trekking camps and the only time I’ve been to Southeast Asia was recently, to volunteer at a sanctuary where they rescue elephants from that very industry. Elephant Nature Park, in northern Thailand, is a refuge for elephants who—in addition to trekking— have been rescued from logging, street begging, and circus acts.

While there, our volunteer group was shown a couple of videos about the endangerment and decline of Asian elephants. There was also footage of elephants being overworked and mistreated in the tourism and logging industries and clips of Phajaan. While I was previously aware of the situation, I found myself shifting in my seat and looking away from the disturbing images on the screen with tear-filled eyes.

In the effort of raising awareness, the videos were shown to educate visitors about the abuses these industries inflict. There was also a hopeful aspect, as ENP founder Lek Chailert spoke about her organization, Save Elephant Foundation, and her mission to save the Asian elephant. Known as the Elephant Whisperer, Lek has dedicated many years to elephant rescue and preservation.

During my two weeks at ENP, I participated in a variety of tasks: clearing elephant poop from the night shelters, cutting corn, food prep, going on feeding rounds for elephants with special dietary needs, creating enrichment items (tires and baskets filled with food), and observing elephants in the jungle areas with their mahouts (caretakers) to make sure all was well.

I learned about the elephants’ behaviors, social interactions, and dietary needs, as well as physical and psychological issues from the hard lives they lived before being rescued. Some of the physical conditions are limps, abscesses, blindness, damaged feet from stepping on land mines, dislocated hips and injured backs from forced breeding.

While it was hard to hear stories of their former situations, it was very beautiful to observe these incredible beings in a peaceful setting, to know that they are respected and no longer suffering.

When I was in the airport immigration line in Bangkok, the girl in front of me asked about my time in Thailand. I told her about Elephant Nature Park and the elephants rescued from abusive situations. When I mentioned the tourism industry, she asked about elephant riding. As I described what goes on behind the scenes, her expression changed from curious to worried. Did you ride an elephant? I asked. She said yes. It’s ok, I said. You didn’t know. Now you do. Tell your friends.

Since I’ve been home, I have been thinking a lot about the elephants back at the sanctuary—Jaidee, Dao Tong, Jokia, Sri Prae, Kabu, Mae Jan Peng, Saza—and the rest of the 70 residents. From hardship to peace, their stories of resilience and healing deeply touch my heart. How forgiving they are of humans. For all of the elephants in Thailand and elsewhere in Southeast Asia that are exploited for work and entertainment, such as carrying gleeful tourists through jungle terrain, I will help spread awareness of the realities they endure.

These grand creatures are greatly worth using my human voice for.

This is Why you Shouldn’t Ride an Elephant.