The Bubble in American Egos. 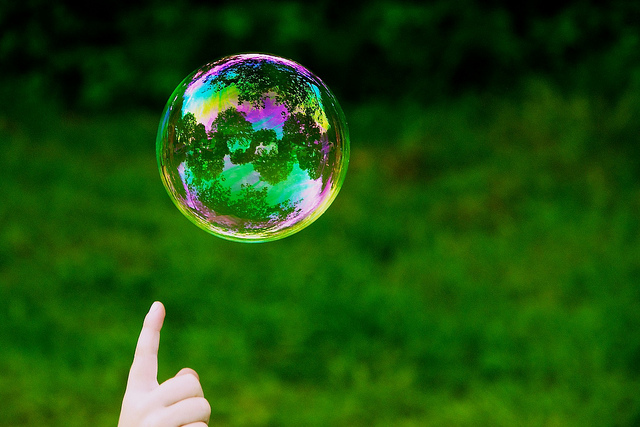 There is something miraculous in Donald Trump’s ego. It is not simply that, contrary to the laws of physics, his head seems to grow bigger the more hot-air is released from his mouth. It is not even that he can brag about his penis in a nationally televised Presidential debate and somehow show no shame. No, the miracle lies elsewhere and is deeply rooted in American business culture. Like a car that can run on gas vapors or a city in the sky, Trump’s ego seems to somehow grow where there is nothing there to sustain it.

It is a classic bubble, built on a vapid confidence, which grows because it is growing, and feeds on its own success. And it is a learned behavior, taught by self-help gurus, with disastrous consequences for culture and economy alike. You too can inflate your ego to such proportions that the people around can no longer tell fact from fiction and, therefore, submit to your will.

Self-help gurus are an enduring feature of the American landscape, with roots in the First Great Awakening, prior to the nation’s founding. Benjamin Franklin is but the best known proponent of pulling yourself up by your bootstraps. The inspiration to recreate your life through living boldly and becoming the master of your fate is responsible for many of America’s greatest cultural innovations. But there is a bubble in American egos, fostered through an ethic of self-inflation and sold to us by personal development gurus, that destabilizes the economy and corrodes the culture. Donald Trump is but an unusually successful example of a far more common malady.

The self-help gurus of today are less likely to focus on inner transformation and more likely to tell us to fake it ‘til we make it. This credo is perhaps best exemplified by Timothy Ferriss’s aptly titled blockbuster success, The 4-Hour Work Week. There we are enjoined to outsource our own jobs to highly educated, Indian personal assistants, for whom we pay but a fraction of our own salaries, letting them do the hard work while we take the credit. Ferris is a classic con-artist, who brags about his deceptions, and gains audience for his audacity.

Projecting an image of success need not be so unethical. It works because self-image is such a powerful motivator. By changing our own self-perception, we can often transform ourselves in the eyes of others. We might begin incapable and unsuccessful, but this changes as we adapt to the new self-image and as others see us in a new light. Whether this works consistently is doubtful, but the real problems with this sort of boosterism are social and economic.

When everyone projects an image of success it sets in motion a competition for status in which the most deceptive reap the highest rewards. The result is a society of surfaces, in which overconfident shysters increasingly navigate a social hall-of-mirrors. While inequality and corporatization have played their part in this strange death of reality, seldom do we give sufficient attention to the role of self-help gurus.

Projecting an image of success does not scale very well. For if everyone does it, we cannot tell who is successful and who is not—even the losers appear capable. And while new indicators of success and capability might be discovered, the indicators themselves will be quickly learned in an evolutionary competition in which everyone is out to deceive everyone else. It thus becomes hard to tell where people really stand, and in the confusion many will be promoted to positions above their capacities.

The idea that everyone is eventually promoted to his or her own level of incompetence is what management thinkers call the Peter Principle. Investors play their part in this universal overreach, over-investing in the inflated egos of entrepreneurs and their overconfident employees. And they deceive one another as well, emulating each others’ own overconfidence. Instead of inspiring individuals to work harder or smarter, we are taught to merely appear more productive. The result is a bubble economy much like the American scene prior to the crash in 2007 and the Chinese scene of today.

When a sector of the economy is significantly overvalued, economists call it a bubble. Recent years have seen a string of bubbles in dot coms, housing, and finance, with some economists now saying we have a permanent bubble economy. Part of the reason for this is that investors have shifted from long-term investments in harder assets to short-term investments in liquid financial instruments, whose valuation is much more difficult to determine.

But there is also a bubble in Americans egos. The role of entrepreneurs is critical here, for insofar as entrepreneurs can convince investors of their sure success, their impossible schemes will be financed by similarly self-deceptive investors. The result is over-investment in all the wrong places. More failed businesses are started, more money wasted. But everyone looks more successful—until it all comes crashing down. For as we have so recently learned with the housing and financial crashes, wealth that rests on an ephemeral cloud of illusions is a sort of inflation. And inflated bubbles sooner or later pop.

So long as it is just a few people inflating their egos in this way, they may grow in self esteem, with little wider socio-economic ramifications. Individuals capable of projecting success may even empower others to take control of their lives. But the closer we get to universalization, the more this ability becomes prerequisite to achieving anything. Projecting an image of success then becomes a sort of social survival skill, like the elaborate social graces of some feudal court, and worse still, we come to admire those whose smugness seems least touched by reality.

When everyone learns to inflate their egos in this way, we lose the ability to make sense of the world, becoming alienated from the inside out. Deception becomes more common and acceptable, as social solidarity fragments. Businesses staffed by incompetents are overvalued and the economy is destabilized. More worthless goods are sold in an effort to deceive a public confused by false signals. And we all pay a price in having to learn a new set of otherwise worthless social skills. The deceptive prosper, the honest lose out, and everywhere surfaces reign over depths. Trump is but the most egregious case and a symbol of just how far we have fallen.

If you liked this article, please check out my book, Convergence: The Globalization of Mind.