Why an Abuse Survivor Can’t “Just Get Over It”—Embracing the Triggers. 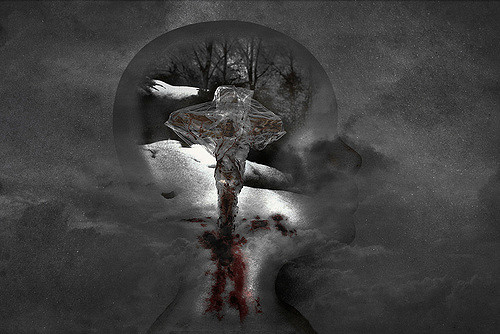 Often the world tells abuse survivors to “just move on,” or to “get over it.”

Many survivors latch onto this advice, working very hard to ignore and avoid the unpleasant, because, quite honestly, no one wants to go back to relive the horrors of being violated by another human being.

However, the deep and profound truth is that an abuse survivor, anyone with PTSD of any kind or anyone who is a survivor of a traumatic event, cannot simply “just get over it.” It is not physically, emotionally or spiritually possible. No matter how much we try to convince ourselves that it is.

To “just move on” means to leave an injured piece of you without the attention it needs and deserves.

If you got hit by car resulting in a broken leg, you would get medical attention for your injury.

Trauma is exactly the same.

The bone is protruding from your leg and blood is gushing every where, but no one wants to see it, including you, because it is just too painful. “You are fine. It’s no big deal. Just get over it.”

This would be, of course, an absurd reaction.

It is exactly the same as telling an abuse survivor: “Just get over it.”

The protruding bone and gushing blood for an abuse survivor is every nightmare that wakes them in a cold sweat with their heart racing, tears steaming down their face and silent screams begging to erupt. For an abuse survivor, every flash of remembrance, every visual image, every physical sensation, every smell that makes their stomach turn, every person that reminds them of those that violated them, every thought that brings them to tears or blinds them with rage, these are the “triggers” that indicate there is something in need of healing for an abuse survivor.

They are equally as painful as the physical injury, maybe more so because, in truth, no one would tell the victim of a car accident with the broken, bleeding leg to ignore their injuries, yet victims of sexual violence are given this advice every single day.

I am a firm believer that this planet is my school. I believe I’m here to learn, grow and, eventually, graduate. We graduate when, overcoming all obstacles, we make our way back to the Oneness of the Divine’s Unconditional Love.

In this journey back to love, I believe “triggers” are divine gifts for an abuse survivor. I believe they are very clear, very specific directions from the universe about what I need to deeply examine in order to heal.

Triggers, whether a visible open wound or a pervasive, intrusive, recurring memory, is the way in which the body, mind and spirit points us to the pieces of ourselves that need our love and attention.

Triggers for an abuse survivor are every single thing that happens in life that isn’t loving, kind, peaceful and pleasant. That is the extent of our injury.

It is not just the way an actual flash of memory makes your stomach roll and your forehead trickle in a cold sweat.
Your panic attack at the dentist? Protruding bone, gushing blood, trigger.

The icky feeling you get when smelling a food you hate because it brings up a memory? Protruding bone, gushing blood, trigger.

Out of control yelling at your children? Protruding bone, gushing blood, trigger.

All gifts. All the universe saying, “Look at this to heal.” All pieces of me in pain trying desperately to get my love and attention.

I am a firm believer in triggers as gifts to be embraced and examined. It took me a very long time to learn that the Divine gives me the triggers to show me pieces of me that i need to sit with, embrace and deeply feel in order to clear the channels for Divine Love.

For years the smell of Play-Doh would make me physically ill. I avoided it for my entire life until my children were old enough to play with it.

I finally decided I had enough of the torture. I needed to understand the mystery of the Play-Doh. I took a big chunk and I meditated. It didn’t take long to be gifted with the healing memories of that trigger.

I was taken back to the day care center on the military base where I was abused as a very small child. The things that happened there were heinous. They’d been haunting me for my entire adult life, the memories of the day care center that smelled like Play-Doh.

I felt the horror and terror of the small child inside of me. I felt her fear. I cried her tears. I screamed the screams that were frozen inside of her for over 40 years and with that release that gift served its purpose and was gone.

If I wanted to heal, there was no way around feeling the feelings that went with my abuse. I couldn’t “just get over it” and “move on.” I had to solve the mystery with the clues that were being provided to me as triggers along the way.