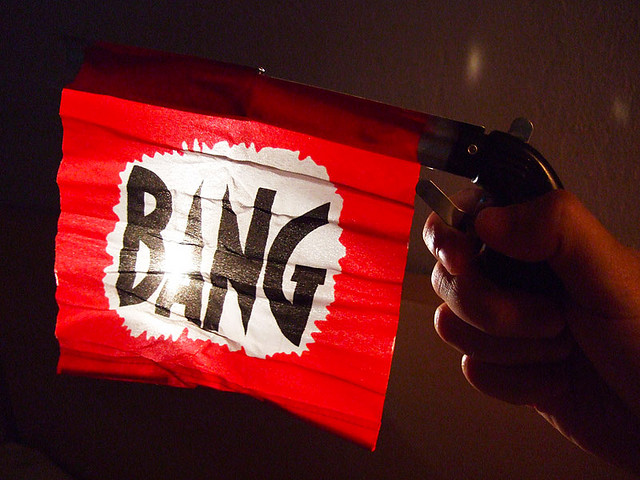 Every time I see someone mention “good guys” and “bad guys” I think “Ya’ll have been watching too many movies.”

I mostly encounter this vapid trope in discussions about gun control. In that context, where the whole discussion disturbs me, I tend to not focus on this particular bit. But recently I read an otherwise intelligent interview with Tim Cook, the CEO of Apple, about his dispute with the FBI over encryption.[i] When someone as intelligent as Tim Cook uses the terms “good guys” and “bad guys” to try to clarify something as complex as personal privacy, national security and the reach of government, it screams out to be addressed all on its own.

In the highly polarised (non-)debate about guns and the 2nd Amendment, this black-and-white simplification obscures the fact that most of the mass shootings in the United States are perpetrated by people who have no prior record. Acknowledging that simple fact would undermine the pro-gun lobby’s mantra that “only a good guy with a gun can stop a bad guy with a gun.”

In the real world, it is very rare for anything to stop a “lone wolf” gunman[ii] except for running out of ammo.

But let’s not get bogged down in those details.

Instead, let’s look at the overly simple trope of good guys and bad guys. This framework paints the world in black and white. It ignores the obvious reality portrayed by the yin-yang symbol— that there is always some dark in the light, some light in the dark. 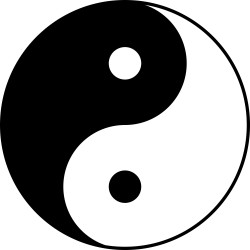 I joked at the beginning about too many movies; but in the best movies and novels the hero has a dark spot, and the bad guy isn’t all bad. Michael Connelly’s characters Harry Bosch and Mickey Haller (the Lincoln Lawyer) are both flawed characters. Jo Nesbo’s hero Harry Hole is a very dark character. In a different genre, the central tenant of the Christian doctrines (which much of the pro-gun lobby claims to embrace) is that we’re all flawed characters, in need of guidance and salvation.

Perhaps what was most upsetting in the Tim Cook interview was the implication that the government and law-enforcement officials are unequivocally “good guys.” There was no acknowledgement that the basic point of the 2nd Amendment is that the Founding Fathers[iii] recognized that the government can be the bad guys!

How can politicians who bought into the Apple vs FBI dispute defend the gun nuts on the one hand and on the other hand unequivocally side with the FBI? How do they get away with it?

The populace seems to have become so partisan, so divided about who are good guys and who are bad guys that they don’t even see this hypocrisy. We have become a fragmented people, divided and thus conquered. We take sides, and then defend “our team,” “our guys,” “our side,” no matter what.

This has become so automatic that we cannot even ask whether maybe this time “our guys” are wrong.

You don’t need to know much about the history of the FBI to know that it is less than pure. More generally, every day the news media reports on some of the many ways that law enforcement in the United States is not on the side of righteousness.

I don’t want to fall into the other trap of tarring all cops with the same brush, either, though. There are a lot well-meaning and upright citizens working in law enforcement in the interests of upholding the law; people who genuinely “serve and protect” their communities.

But anyone who is so immersed in the imagery of Hollywood as to buy into the “good guys and bad guys” trope surely remembers that the bad guys that Dirty Harry was up against in the original film were cops.

The crooked cop, the bent cop, the abusive cop are as common in these films as the hero cop.

Unfortunately, it’s not only in Hollywood, either. The “Black Lives Matter” movement is an uprising in response to cops killing. At a different level, there is disturbingly widespread trend for law enforcement professionals as well as judges and prosecutors who have investments in the privatised prison system, to make decisions about people’s lives that protect their investments by ensuring high occupancy rates inside the prisons that they are investors in (look here and here for a start).

At a subtler level, we have to recognize that almost no-one embodies “pure evil.” One of the most recurring reports we hear from friends and neighbours of the so-called lone-gunman shooters is “we never expected him to do that”.[iv] This is not to defend them, or to make excuses for them, but simply to highlight that the good guys / bad guys framework oversimplifies everything.

In Waco and in Oregon, the people on both sides of the armed stand-off view(ed) themselves as the good guys. In almost every case of terrorism, the perpetrators believe they are acting on behalf of what is good and righteous.

In many other mass shootings, the perpetrators have given up hope that right will ever prevail and are lashing out in anger.

The good guys and bad guys trope oversimplifies everything and muddies the waters in the process. It serves no purpose other than to keep us from dealing with the real issues at stake.

In the case of the NRA, it serves to distract us from seeing that in most shootings, until the moment the trigger is pulled, the perpetrator is one of the good guys.

Only in hindsight do we judge him a bad guy.

Sure, there is some merit to the argument that if we take away everyone’s guns, only the bad guys will have guns. But when we look at the incredible rate of gun related deaths in the United States we see that only a small proportion of them involve “criminals.” So if it ever came about that the law-abiding citizens were disarmed, the rate of death-by-gunshot would fall to negligible numbers. Yes, there would still be a few law-breakers shooting people—but if we could save 95 out of 100 lives, wouldn’t it be worth it?

To cite only one specific statistic, “children are far more likely to die from guns held by family members and acquaintances than strangers, according to an NBC News analysis of FBI data” (cited by The Trace, April 15, 2016). There were 756 children in this category in 2015 alone—most of whom would still be alive if it was only criminals who had guns.

I don’t think we’ll ever see an end to the horrors of gun-related killings in the United States until we move beyond this simplistic and simplifying trope of good guys and bad guys.

And we won’t move beyond it until we each stand up and object to its use every time it’s wheeled out. And until we come to understand that we’re only going to fix this problem when we see ourselves as a community with a shared problem, rather than individuals whose most pressing concern is the need to defend ourselves from everyone else in our community.

[ii] Alas, this is one instance when I can use a gender specific term without being offensive.

[iii] Another instance when gender specific terminology is warranted.

[iv] Granted, this is not universally true—apparently few people were surprised by Dylan Roof in Charleston, for example. Yet, at the same time, he was “good guy” enough to “legally” acquire his weapons and ammo!