The Democratic Base is About to Erupt. 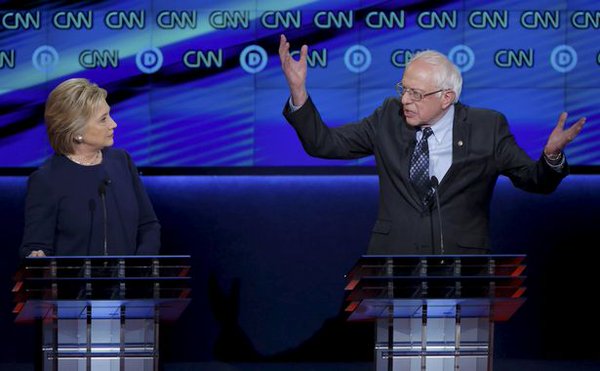 A recently deceased mentor and friend once told me about a Vietnam War protest in front of the Pentagon, where against his more peaceful instincts, he spontaneously picked up a stone and threw it at the behemoth, and as his gaze softened and he looked around, he found to his astonishment  that all its windows were shattering, as scores of protesters, in a moment of outrage, sent their own stones sailing.

Listen closely and you might feel a rumbling that courses through political conversations, and it is not just the familiar trumping of fascist boots-on-the-ground. We have watched the best minds of a generation ground-up by inequality and social-anxiety, watched the decline of democracy and the rise of dynasties, the worst prosper, while the rest fall behind—and Hillary Clinton is beginning to represent, to many young Americans, the most detestable elements of the new elite: the smug sense of entitlement, the fusion of money and politics, the craven clamor for war, the swaying to the winds of a public unhinged from reality. And the windows may be about to explode.

Democratic Party elites are alienating a whole new generation of voters and potential party players through their  dismissal of Bernie Sanders. Even as he crushes Clinton in a sequence of five-states by 50-percent margins, raises more money, draws in more donors, commands bigger crowds, inspires more devotion, steals the debates, and ruins Republicans in head-to-head polls, still, they insist the primaries are over.

It does not matter, because Clinton is the new face of machine politics. Just as she is owned by the big-donors, she owns the party leadership, who serve as her backstop. The sense of entitlement is simply astounding. And the bullsh*t mounted when Clinton’s campaign strategist, a Wall Street consultant of all people, announced on CNN that Clinton would not debate Sanders unless he changed his tone—unless he changed his tone.

The same people who tarred the Obama candidacy as a “fairy tale” in 2008, in the words of President Bill, portray Sanders as a racist, old, gun-toting white-man. The constant reference to Sanders’ purported pro-gun record is a barely disguised effort not to talk issues but to paint a caricature for inner-city African Americans. Clinton even hinted that Sanders supports the so-called Minute-Men, who guard the Mexican border. Never mind the fact he once got arrested fighting for civil rights, that the National Rifle Association score his record at a D-minus, or that his program would benefit the disenfranchised more than any President since FDR; the innuendo never lets up. And then Clinton projects onto Sanders the negative tone for which she is so well known. It is a common tactic of bullies.

This same patronizing tone can be found among her supporters, who argue for realism as they worry for their assets. They act as if it is all decided and no one else had a chance. They reverse history and argue that having spent eight years living in the White House is not a reason to keep her out but to put her back in. They argue winning is impossible by blurring the difference between delegates and superdelegates, omitting that superdelegates have always shifted allegiance to the most popular candidate. It is a lie as big as the Iraq War Clinton helped start; it is as corrupt as her militant shilling for Israel to win support from the second most powerful lobby.

Clinton supporters are running out of arguments. The “yes, we can” of Obama 2008 is morphing to the “no, you can’t” of Clinton 2016: no you can’t criticize our candidate, no you can’t pass big programs, no you can’t win the superdelegates, no you can’t beat Trump. This is cynical and wrong. Sanders has higher favorability ratings than anyone in this race. And he destroys Republican rivals in polls. He is popular because inequality and money-in-politics worry everyone, and they are arguably the most vexing issues in America today. And if he is nominated, he will bring a whole new generation out to vote, and will enter office with the Supreme Court, and possibly the House and Senate, on his side.

We can win, actually, and we can win big. Tens of millions of us now feel the burn of economic inequality, of political corruption, of Presidential dynasties, of a patronizing Party, and the media’s half-disguised campaign; most of all, we feel the burn for something better. Bernie can win. And all of this hope and frustration looks poised to erupt over the next couple of weeks, as the media black out, the string of blowout victories, and the arrogant dismissals, collide with what is beginning to look like the largest social movement in a decade.

But as you pick up your word-stones, take a moment to look around, inhale a deep breath, remember your ideals, and let this be an election in which love stares down hate and wins: something beautiful is about to blow open and it is time we open it together.
~

If you liked this article, please check out my latest book, The Inner Climate: Global Warming from the Inside out.